Do you look to the future or look to what is already accomplished?

An email went out this week with notice that the North Broadway / High Street Parking Management Study has a project website and is about to gear up.

Do you see a fresh sheet of paper, a clean slate? 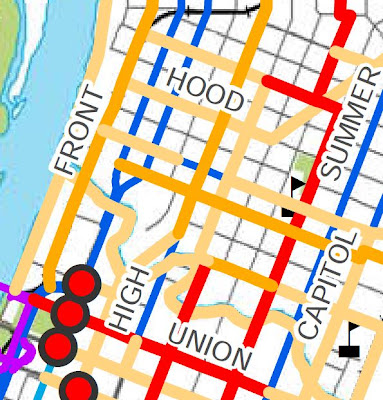 Because the area is not as highly developed as downtown proper, I have argued that the chance to create complete streets, to adjust the streets for true mobility choice, may be greater here than in downtown proper. Gary Obery has also argued for North Broadway/High Street as a focus area.

As you can see from the map, the orange and yellow are all projects labeled tier 2 and 3. We didn't carry the argument. We were looking too much to the future.

The immediate development along High/Broadway doesn't have the retail and commercial density, doesn't have the concentration of destinations. The new townhouses nearby haven't sold and filled in. Most would conclude that the district is more promising than happening.

Doug's proposal, which has attracted more support, centers on Union, Chemeketa, and Church streets. He's looking to what is already there.

The magic of downtown is in fact what's there: The old streetcar grid and the old commercial storefronts. This historic grid is the most walkable part of Salem. 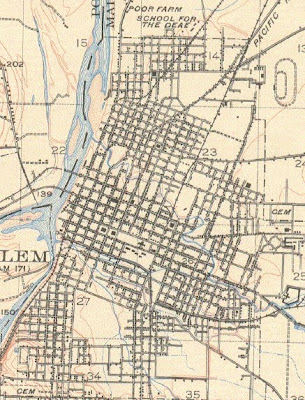 Salem's downtown has short, square blocks, perfect for walking. This detail is from a 1917 USGS quad. In the horse-and-buggy era, as well as the streetcar era, people used to walk a lot. Even after a century, the street grid and older building stock are still made for walking, still embody the logic of walking. And with restaurants, offices, boutiques, and other business, downtown is full of places you might want to go.

With the right improvements in downtown, there are a lot of short trips currently made by car that could be shifted to walking or biking trips. Think of the Fairmount, Bush, Englewood, Parish/North, and Grant neighborhoods. Folks who live there should visit downtown often and feel they can walk or bike.

Out in neighborhoods from mid-century and later it's not as easy. Land use is critical. Even with good infrastructure for walking and biking, the destinations are spread out, zoned along and confined to wide arterials like Lancaster and Commercial, and in many ways still auto-dependent. The disposition and distribution of businesses and amenities will need to change in tandem with reconfigured street engineering.

This is why it makes sense to focus on downtown, even if there are important ways that the benefits may not be distributed equally.

Even so, the Parking Plan represents an opportunity. Things in the Grant neighborhood haven't been messed up with very many one-way streets, and the residential neighborhoods breathe in more flexible rhythms, not confined to the nine-to-five of an office park, like the Capitol Mall with State offices to the southeast. The future is bright.

In fact, the neighborhood is optimized for walking and biking! 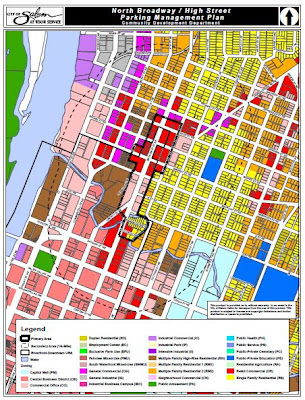 Near Broadway and High streets are lots of homes, in yellow/brown/orange on the zoning map. Many of them are historic, and Virginia Green has captioned several of them.

Many of them don't have attached garages or even a front driveway. Instead they have a generous front porch and a detached garage in back, off of an alleyway.

Interestingly, the newest commercial building, Broadway Commons, has exactly the same structure! It is really a walkable development - but at the same time it accommodates car trips from out of the immediate neighborhood. It serves both near and far - at least in theory. 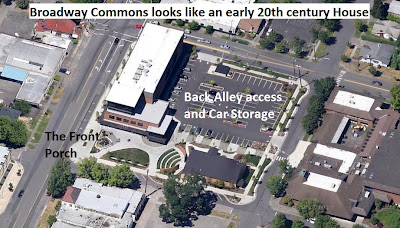 It's pretty clear, though, that there's not yet a balance for the the businesses there. For Broadway Commons, it has seemed that waves associated with the Church and its worship services have provided much of the traffic. Businesses across the street like Salem Cinema, are also dependent on car trips.

But if the neighbors can find ways to walk and bike to the district! And if the area attracts some other businesses, like a mid-sized grocery store or something!

Hopefully the parking plan won't conclude that large bunkers for free parking are necessary, and it can work reduce the size of surface lots.

It will be interesting to watch the project. The page is blank at the moment, full of opportunity.
Posted by Salem Breakfast on Bikes at 7:00 AM

Eric and others,
I am interested in more of your thoughts regarding this area. I will be serving on the Citizen's Advisory Committee for the Parking Management Plan just now getting under way. First meeting hasn't been announced yet, but may be shortly.
Gary Obery
4bikes@comcast.net

Great news! Hopefully the larger businesses, like the Y and the Church, will be on board with it!