Bike Plan a Damp Squib at the Planning Commission

The Planning Commission met Tuesday night for a work session on the Biking and Walking Plans.

The meeting was more than a little anti-climactic. In truth, not a great deal of work was accomplished, and nobody's heart really seemed to be into the matter. 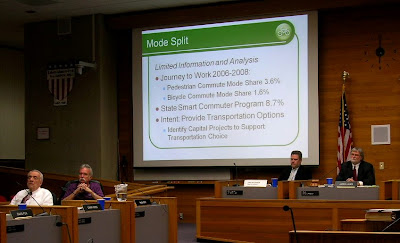 The session was, probably, just a dud. It fizzed softly and expired quietly.

There may not be a point to trying to say more.

Towards the end of the meeting, Commissioner Gallagher said that as it stood, he was a "no" vote on it. Commissioners Fry, Levin, and Lewis had also expressed reservations. It seemed that a tepid vote to proceed would be the absolute best outcome in January if nothing changes.

And maybe if Gallagher is firm in his "no," others will fall in and the Planning Commission would not recommend adoption to City Council.

Almost certainly the best thing to do with a squib (or a turkey) is to take the mulligan.

The next meeting will be on January 3rd at 5:30pm. Please come to it and show your support!

If you haven't commented, here's the online comment form. A surge of commenting, publicity, and advocacy will help ensure the next round is not also a dud.

An extended footnote: It's crazy how much of the conversation around the plan was framed around takings and property rights rather than framed as looking to the future and working towards a wonderful new transportation system for Salem. Folks are zeroing in on a few trees and have lost a sense for the forest.

The cemetery and the matter of vacating the right-of-way north of it loomed over the meeting. A representative from the developer was there, and Commissioner Levin mentioned it. It is still contentious.

So contentious that an appeal had been filed with the Oregon Land Use Board of Appeals.

But it's not difficult to understand the appeal, as the City's 180-degree reversal was not well founded. Here's the original staff recommendation:

That would have made all kinds of good sense.

Instead, the City moved forward with the vacation and stretched reason to do so. Political expedience rather than the formal vacation criteria seemed to rule the Council decision, and it will be interesting to see if the LUBA ruling confirms this reading of the City's approach.
Posted by Salem Breakfast on Bikes at 7:00 AM