City Council, December 5th - Sidewalks and the Prospect of a new Police Station

On Monday City Council will discuss sidewalks in the road bond, but in many ways the most interesting part is the report on prospects for a new Police Station.

Back in October the City baked the list of projects for "missing sidewalks and bike lanes" part of the road bond.

For people who bike, chief on the list was the blind corner and narrow clearances of the cut-through from Miller St S to River Rd S. 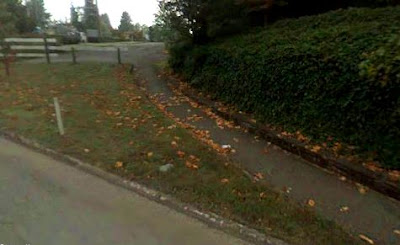 The matter will come before City Council for a Public Hearing on Monday night.

The rest of the $1.2M allocated for sidewalks and bike lanes will go to sidewalk repair and construction:Strictly speaking, it doesn't appear there will be any new bike lanes constructed.

As a sort of footnote, there is an interesting report on sidewalk construction, requested by the Morningside Neighborhood Association.

Also on the bond measure, there is a proposal to exempt from public bid process the contracts on the rail line for the "quiet zone" and crossing improvements. The proposal looks somewhat absurd on the surface: As apparently the projects are all in the railroad's right-of-way, the railroad is the only entity that can do construction work. So if folks insist on a public bid process, it's far from clear how that would work. This looks like a mere formality. Another footnote.

Maybe the most interesting item - at least the one with the biggest budgetary impact - is a status update on the site evaluation for a new Police Station. Cost estimates range from $53M to $60M for a retrofit to a new facility. As with so many things, parking is a differentiator:

Here's the concept plan for the current preferred Civic Center site option, in a rendering by collaboration between CB|Two and ZGF architects. 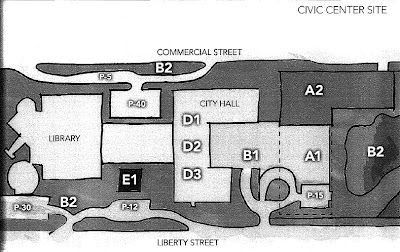 The new building, identified by A2, would sit across from the Boise project. Here's a corresponding aerial view (awkwardly snipped and rotated from the google):

The Civic Center is currently a dead zone outside of business hours, a mono-use office park that empties out at 5pm and on weekends. It would be neat to have some ground floor retail or restaurant, something unrelated to police and other City or emergency services, that would relate to the Boise project (also currently being designed by CB|Two) and create a richer zone of activity here. It's also an opportunity for a lovely building as opposed to the brutalist fortress now there.

When the earthquake hits, City Hall will be toast, so it's not like this is a frill. This is an essential infrastructure project, and hopefully the City will do it well and do it right.

In an information report, the name change for a segment of Salem Industrial Way to Auto Group Avenue appears to have been approved without asking for any concessions.
Posted by Salem Breakfast on Bikes at 3:00 PM