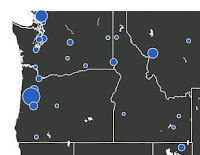 A reader sends this neat interactive graphic from Governing Magazine.

They sliced the data from the American Community Survey of the US Census and created a map showing walking to work magnitudes. By clicking through to an individual city, you can see the entire mode split.

By percent, more people walk to work in Salem than in Portland. Corvallis has the highest rate in Oregon.

The bike commute numbers are also included on the captions - but not the dots on the map.

The initial presentation to the advisory committee of the Downtown Mobility Study (the page loads slowly because someone linked to a ginormous aerial photo - get the techies to post a downsampled image!) is posted, and while it remains wonky and dry, all things considered it seems like a decent overview of the traffic issues and planning questions downtown. If you're interested, it might be worth skimming and book-marking for later reference. Even more than Bike and Walk Salem, this is the nexus for real change downtown, and it will be critical to generate support and interest so the study doesn't merely sit on a shelf.

Here's the morning rush hour traffic volumes. It's pretty easy to see that outside of the Front/Liberty/Commercial and Marion/Center clusters, there's plenty of roadway to use more efficiently and more creatively. 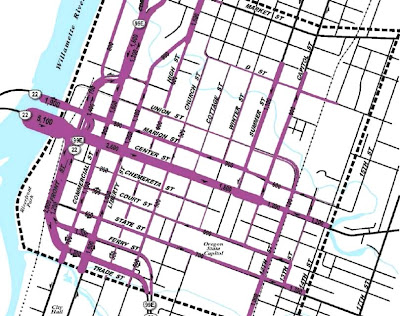 I think this presentation could mislead the advisory committee. High, Church, Court and State are currently (mis)classified as major arterials designed for 15-50,000 ADT with 4 travel lanes + left turn. But High and Church have less than 7000 ADT and State and Court about 9000. They barely meet the threshhold for minor arterial designed with 2 travel lanes. The way the street system guidelines were presented it they make it appear that these streets should have 4 travel lanes and not 2.

Well, you might be right. It could mislead the committee. It's all about what they emphasize. The consultants, staff, and technical committee could look at the data and say, "let's look at reclassifying and reconfiguring these streets, since they're really under capacity" At the same time, they could say, "these are major arterials, and we need to put more traffic on them since they can handle it." It's about choice and building the political will and support to make good choices for change.

Next steps include some proposals to be presented in December. The direction they go will be telling.