A Look Back at 1999 Parks Plan Revealing

Prodded by the December 6th open house and a commenter who pointed out a bridge in the 1999 Parks Master Plan, I wanted to start reviewing it before the open house.

There's a big multi-use path system envisioned in it! Check out the bridge to Minto from West Salem at College Drive. The Geer line has a rails-to-trails conversion. Pringle creek has a parallel path connection to the downtown core, and links up with paths along smaller creeks. And the site of the Kroc Center was already marked out for a large park and a bridge connection across the Parkway.

It's fascinating to look back at what might have been, to reconsider some of what was built, and what has been retained and unbuilt in current plans. 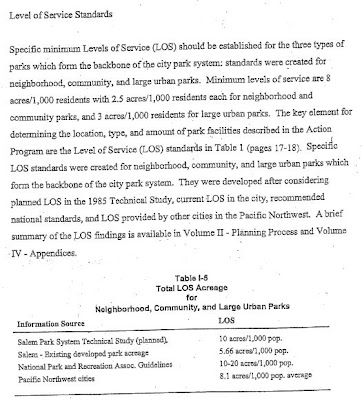 I'm not sure I want to argue these are especially good, but if parks have LOS standards, why can't bike transport? Why don't we have a multi-modal LOS for our streets?

Portland is developing one, handled by the same firm conducting the Downtown Mobility Study, so we can hope that its findings will inform our own projects and that eventually there might be a work product of LOS standards exportable from Portland to other communities.

Are you involved in Parks?  What else is in there?
Posted by Salem Breakfast on Bikes at 6:30 AM