Let's try writing a piece on the fly. New stuff will go at the top, so start reading from the bottom.

So the hearing was continued and no great conclusions made.  Councilors definitely seemed to want more public comment and analysis. It was great to see the No 3rd Bridge stickers.

8:35 - In response to Councilor Blasi's question, Julie Warncke appeals to the Alt Modes Study, as having investigated TSM/TDM measures.  But this is a house of cards!  The foundation of the Alt Modes Study is not sound, and they used faulty assumptions.  GIGO.  But how to make it clear to Councilors that there are these analytical problems behind the faulty conclusions.

8:26 - Councilor Nanke asks who would own and maintain the bridge.  Julie Warncke said they didn't know!

8:22 - Councilor Bennett has some hard questions about how the process works.  He was especially interested in how Councilor Clem as the representative on the Oversight Team and on the SKATS Policy Committee was bound to follow, or free to ignore, Salem City Council.  Bennett also said that this is "our town, our bridge" and that "$700 million is a pretty big deal."  After Councilor Clem addressed the question, Bennett said so "we have a veto," and wanted to be clear that this was true.

8:13 - Councilor Nanke suggests Council continue the hearing.  Council settles on December 10th.  This would be after the work session.  Interestingly, the continuation of the Bike and Walk Salem Hearing without a "date certain" was bad form!  Councilor Bennett says that the public should be invited again to give written or in person comment.  And makes clear this is not a quasi-judicial hearing and that outside contact is possible and even encouraged with constituents!

7:45 - John Miller of the Chamber of Commerce talked about being "astonished" by the Union Street Railroad Bridge. He was a skeptic, but now a fan! Councilor Bennett asks him what he thinks of the $700 million cost.   Not sure he answered the question.  Councilor Blasi asks for a specific position, and the Chamber supports 4D. 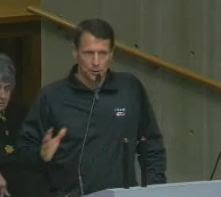 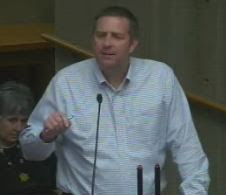 7:35 - Bob Bailey talks about the need for a smaller bridge - maybe an arterial bridge instead of a highway.  He talked about the prospects of a major seismic event and the need for redundant and resilient networks, as well as bridges that play nice with the adjoining neighborhoods rather than busting through them.

7:26 - Still more questions for Fortey.  Councilor Bennett asks about the impacts to Pioneer Village and the Edgewater/2nd Street district.  It sounds like the West Salem NA may be split and has not been able to land on a particular stance on 4D.  They have questions rather than positions.

7:18 - Councilor Nanke with the Star Trek reference!  His was the second question from Councilors.  Councilor Blasi first asked about freight movement and logistics concerns.  The questions were to Nick Fortey, transportation chair for the West Salem Neighborhood Association.  Steve Dickey, guest councilor for Councilor Diane Dickey asks about tolling.  Look for more good questions from him, as he works for Cherriots.  Fortey asked for more study on tolling and for more attention given to TSM/TDM solutions.  Lots of questions by Councilors.  Nick also works for the Federal Highway Administration and he's likely seen as an extra credible source, in addition to representing the neighborhood association.

7:03 - Maybe the NOs are stacked up front, but so far we're six people into citizen comment, and none of them are speaking in support.

6:55 - Darlene Strozut talked about the impacts to Highland School and the time the Mission Street overpass went in at Deepwood, where she was Executive Director. 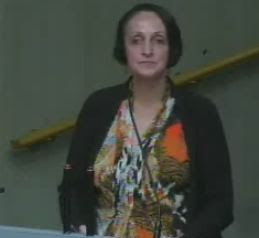 6:50 pm - Betty James talked about "a cloud" over the Highland neighborhood, and the reluctance folks felt about remodeling and worry about property values if a bridge goes in. 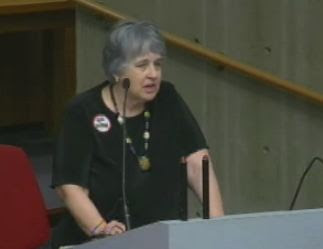 Julie Warncke with Public Works gave an overview of the process. Councilor Bennett is presiding in the Mayor's absence. 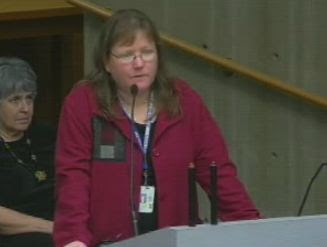 Apparently Mayor Peterson is on vacation.


So, Mayor Peterson is on vacation during elections, according to a city staffer. Luxury of running unopposed? #sjnow #salemor
— Saerom Yoo (@syoo) November 6, 2012

Here's the letter from the Chamber of Commerce. 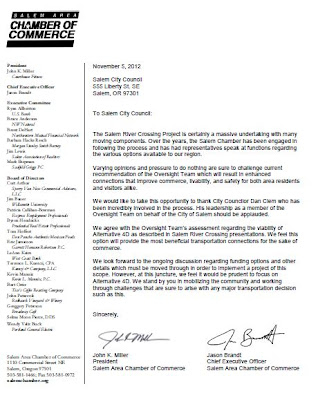 
The Salem River Crossing Project is certainly a massive undertaking with many moving components. Over the years, the Salem Chamber has been engaged in following the process and has had representatives speak at functions regarding the various options available to our region.

Varying opinions and pressure to do nothing are sure to challenge current recommendation of the Oversight Team which will result in enhanced connections that improve commerce, livability, and safety for both area residents and visitors alike.

We would like to take this opportunity to thank City Councilor Dan Clem who has been incredibly involved in the process. His leadership as a member of the Oversight Team on behalf of the City of Salem should be applauded.

We agree with the Oversight Team’s assessment regarding the viability of Alternative 4D as described in Salem River Crossing presentations. We feel this option will provide the most beneficial transportation connections for the sake of commerce.

We look forward to the ongoing discussion regarding funding options and other details which must be moved through in order to implement a project of this scope. However, at this juncture, we feel it would be prudent to focus on Alternative 4D. We stand by you in mobilizing the community and working through challenges that are sure to arise with any major transportation decision such as this.

Miller, I see now, is with Courthouse Fitness, and it's too bad that he wasn't asked, as Erdman was, about the impact to the business.  It's interesting how the letter says nothing about the cost or paying for the bridge.

For more on the River Crossing / Third Bridge see a summary critique and all breakfast blog notes tagged River Crossing.
Posted by Salem Breakfast on Bikes at 6:48 PM