The City's first bike-only traffic light is up and operating!

Just before the downpour yesterday, I noticed that the traffic light west-bound on Chemeketa at 12th had been swapped out this week for the new bike light.

Back in the spring of 2010 a light was part of the proposed "Quiet Zone" crossing treatment for 12th and Chemeketa (revised to this).

During the 2011 Legislative session, a law for these had to be passed. Portland had had these signals for some time, but as Portland signals engineer Peter Koonce said to BikePortland, the bike signals had existed outside of statute and occupied a legal grey zone.  The law codifying them, Senate Bill 130, was introduced to the Legislature before the session and signed into law in June of 2011.

And now we have one!

So where will the second one be???

Front page on the SJ: 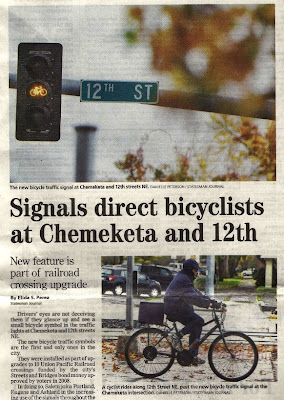 Posted by Salem Breakfast on Bikes at 11:30 AM

Sorry to be dense SBOB, but I don't get it. What is a "Bike-Only Traffic Light"?

Updated with better picture! Because of the clouds, the exposure time was too long, and the yellow light blasted the exposure, so you can't see the bike outline and it just looks like a regular old traffic light. The LA photo and blog discussion will give more detail!

In a comment on the SJ piece, Curt rightly points out that this configuration saves Salem residents some $300,000: A four-quadrant gate would cost half a million, and this treatment was projected to come in around $200,000.