Speed, not Dark, Kills: The Danger in the Streets isn't so Mysterious 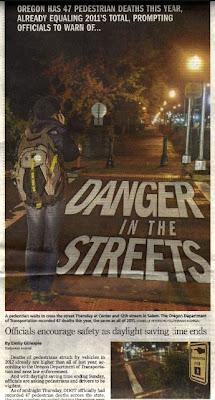 The "danger in the street" or the "monster in the night"?

It's true that there's a significant uptick in crashes at the transitions between Daylight Savings and regular time.

And perhaps it's random noise, but you know, crashes here don't happen only at night, and they aren't just the mysterious result of sudden and unexpected danger in the roadway.

Most of them are preventable - aren't accidents really - and almost all of them involve cars.

The imagery in the SJ graphic, and the tendency of ODOT's public pronouncements, together efface the principal agent - the car and its driver - and minimize the role of speed.  They mystify more than is necessary.

If we want to make people safe, reducing car speed should be at the top of the list!

The graphic and article also over-estimates the effect of dark. Here are two crashes this week in broad daylight and in places where a person should enjoy a reasonable expectation of being safe.

It wasn't like the people on foot or on bike weren't taking care to be away from cars.

There's a radical asymmetery between people in cars and people on foot or on bike. One has a metal carapace, a powerful engine, and moves in space with enormous force. The others are puny in relation. We engineer cars and roads to be "forgiving," to forgive small errors and to make the resulting error-correction as harm-free as possible.

People on foot and on bike should enjoy the same level of engineering forgiveness - but the current standards displace blame and consequences disproportionately on the more vulnerable road user.

To say people on foot and on car share equal responsibility is forget this asymmetry, and too often results in blaming the victim. You know: The road is dangerous, and you should always assume the car driver doesn't see you and will hit you. It's your fault you got hit, weren't careful enough, didn't give the driver enough slack.
Posted by Salem Breakfast on Bikes at 9:00 AM

Kudos to you for another really fine post. This blog seems to have taken a real big jump up the last year or two, with evidence of a lot of hard work and thought. Salem is lucky to have you on the job. In a just world, you would be getting one of those awards the city likes to hand out, butch course they tend to go to those who push the consensus trance opinions (cars are unquestionably wonderful, cars have no costs, everyone drives, homicide is OK if you're driving a car when you do it . . . )

But oh, boy, there's so much more to say.

Forgot about this: In an editorial a year ago, the Statesman wrote that:

"driving is the most dangerous task that most people will ever handle. It deserves and requires every ounce of our concentration."

If doing something is dangerous, then doing less of it will reduce risk and harm far more than doing the same amount and trying to do it more carefully.

And instead of telling the story that bicycling and walking are safe and healthy choices - the more people who walk and bike, and the less who drive, the safer are our roads. Instead of promoting more walking, we talk about the scary monsters in the dark.

The whole google auto-pilot car thing. Let's make driving more complicated, engineer more forgiveness into the cars - but ratchet up the spectacularness of a failure when the new, more complicated system fails, as it surely will.

I recently heard that the most effective and economical thing we could do to improve road safety would be to position a dagger in the center of the steering wheel pointed toward the driver's chest.

I was really struck by the silliness of this article in the S-J. Reading the "facts" and the data suggested to me that the major problem was vehicular speed, pure and simple. I'm not the most anti-car guy going, but this article was so delusional, it made me rather hot under the collar (pun intended, if you get it).

The metaphor so many people live with today is that the normal way to move one's body is via some sort of motorized vehicle...a car, a truck, a motorcycle, a plane, and a power chair (eventually). The ideal, though, is always speed. Any one or anything that dares to get in the way somehow is just "begging" to get knocked down and or killed.

It has, apparently, come to the point that all of us non-motorists have an obligation to wear reflectors, lights, and work really hard to be extra-visible so that people who are going far too fast to control their cars can continue doing so. If we fail to do this, it is our own fault and we deserve our punishment.

In some other countries, however, where people and not machines matter the most, the law has a preference for pedestrians and cyclists, making the automobile the default responsible party for accidents--given that they are the ones with the greater killing potential.

Given the quality of driving in Salem, I would think the S-J would have much more journalistic integrity if it began a critical review of Salem's driving and health culture, rather than just blaming the victims of pedestrian-auto accidents. Are there pedestrians who do stupid, irresponsible things? Sure. But, who has the greater chance of ending up dead in these situations: motorists or pedestrians/cyclists?

Oh, I forgot: In Salem, if you are not in a car, you deserve whatever you get.

Doug, you might remember the old book from the 60s, "How to Keep Your VW Alive FOREVER" -- in the introduction to the chapter on brakes, he said "You should drive like you don't have them, or that you are strapped to your own front bumper."

I know that there has been a lot of argument about bicycle licenses and fees, but I think it's time we adopted a system whereby any young person of 12 or older can take a bicycling/road user class and get a bike license, and only those who take such a class and pass it may take the driver's exam before age 18. The biking/road user class would be all about staying alive on the road, dealing with road hazards, route selection, "get home" maintenance skills, etc. and include a practical exam, which can be completed in a group ride.

Part of the danger on the roads today is that fewer and fewer people themselves have ever experienced the roads except in cars, and they don't know or care about anyone who has. If we create a real incentive, even given our carburban mindset, for kids to learn to bike safely and well, more will know how the world looks on a bike, and drive better.