Hopefully when representatives from the Oregon Bicycle and Pedestrian Advisory Committee address the Oregon Transportation Commission on Wednesday, ODOT-HQ will have figured out that equating bicycling with smoking isn't quite the right message to send.

Especially since the meeting agenda includes the formal dedication of the Gail Achterman Commission Room.  Achterman was a South Salem High School grad, Chair of the Commission, and advocate for active transportation.

The agenda offers some whiplash - though it's to be expected in politics, I suppose.

In addition to the dedication, an important item will be a presentation by members of OBPAC on active transportation.  Part, maybe even the great bulk, of the reason for this are the changes in transportation funding created by the new federal transportation bill.  ODOT Director Matt Garrett had sent out a memo describing how the law would affect walking and biking work:
At least in the current trajectory, OBPAC will no longer have a dedicated pot of funding to administer, and so I read this as part of the conversation about what its future will be.

The slides are interesting - and unsurprisingly, but still disappointingly, the Capital City is mostly on the sidelines.  What will it take for Salem to assume a leadership position on walking and biking?

Included in the consent agenda are a couple of Salem-area requests.

The most interesting one - its magnitude a bit of a surprise, actually - is for $575,200 the train baggage depot. You may recall the $100,000 donated privately (here's a note on it at City Council Tuesday). It looks like Greyhound, ODOT, and Amtrak are serious! 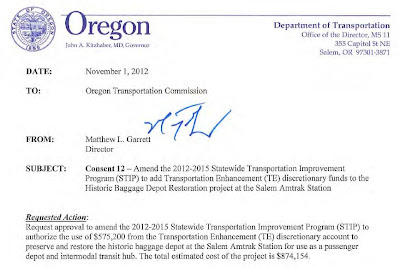 Check out the intent to "tranform" the site into a "regional multimodal transportation hub" with "excellent bicycle and pedestrian access"!

But wait...is the City on board? Remember this Charlie Foxtrot?

It's great that there are going to be terrific facilities at the depot - But if it's too hard to get there, if the street grid around it is too messed up, what use are they!? Apparently as the right hand gives, the left hand takes away...or something like that.

The other consent item is a request for $876,500 in discretionary funding (earlier discussion here) for the Minto Bridge and Path. 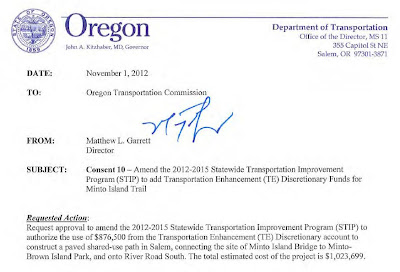