New Restaurant at Liberty and State to Remodel in Old Building

One of the neat old buildings in Salem is the Gray Building of 1891. 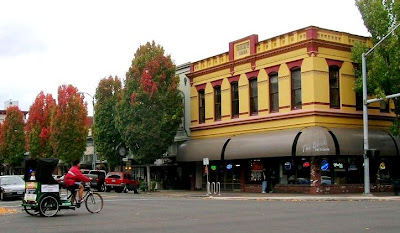 There's an unconfirmed rumor floating around that a restaurant currently out in south Salem may be moving into the spot vacated by the Coffee House Cafe. (Our friends at eat Salem will nose out the details, I'm sure!) I've seen workmen there in the past month and, not so coincidentally, there's going to be a hearing before the Historic Landmarks Commission next Thursday to modify the storefront window system and facade. So it definitely looks like something is cooking there!

The brick and awning of The Brick is not so great, and hopefully the new modfications will better acknowledge the quality that makes for "a neat old building"!  CB|Two is handing the work, but it's hard to tell very much from the drawings in the announcement.  The staff report doesn't show much more detail, other than to ask for the retention of more of the old building and finish materials.

Hopefully the remodeled storefront will look more like the facade of Wild Pear than The Brick.

While I'm on the topic of style, all through the late 19th and early 20th centuries you could buy plans and even entire houses by mail order - kit houses sold from merchants like Sears. The catalogues and other pattern books furnished a basic design vocabulary.

Unfortunately, the plans for Pringle Square employ it. (I have been wondering what to call this style, so it's good to have a name for it finally!  Two other notes critical of its style here and here. More on the development generally here and here.)

The alternating bays, the cornices, the balcony treatments - it's all working off the same basic template and design vocabulary.

It's a box with surface ornament, and draws on the same basic patterning, as if from a pattern book.

Now, it's not like there's not other patterning going on in Salem.  Here's two window grids with a heavy cornice awning.

Even Waterplace has a variation of the cornice on part of it.

But the modernism in the West Salem Clinic and Broadway Commons, and the eclectic detail variety in Waterplace, elevate these designs from what has been proposed for Pringle Square.

Of course there's the problem of budget. In part because of too-expensive construction and the wrong approach to pricing, both the Meridian and Rivers condos are languishing, mostly empty, in the market. Pringle Square must sell and it must pencil out for the developer. So top-shelf design may not be possible for Pringle Square. Still, it's a showcase development of adaptive reuse on the waterfront, the City has made lots of concessions and may yet offer more in order to make the development a success, and getting better design in return should not be such a challenge.  With the path along Pringle Creek and links to Riverfront Park, it also will have public and quasi-public space on it. There has to be some lovely, some delight, some beauty in the design!
Posted by Salem Breakfast on Bikes at 7:00 AM

Bloomberg has a good piece on the style and structure of wood-framed mid-rise architecture.

"Why America’s New Apartment Buildings All Look the Same:
Cheap stick framing has led to a proliferation of blocky, forgettable mid-rises—and more than a few construction fires"

Oh, and SW Oregon Architect has a bit of a counter:

"In Praise of 5-over-1 Construction"