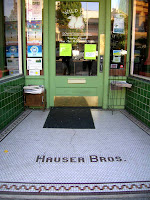 It is a wondrous age we live in, and the internet a marvel!

You may recall a note about early bike dealer Paul Hauser and Wild Pear.  With his brother Lloyd, Hauser built a chain of local sporting goods stores and installed this tile entry where today is Wild Pear.

It's hard to tell where this was taken. It could be somewhere in Salem, or in any number of communities in the Willamette valley. (If you recognize the bridge, still wooden it seems, or other details, please comment!) As for time, presumably it was taken during the business partnership of Shipp and Hauser.

As best as I can tell they were business partners from the spring of 1901 to the winter of 1903/4.  The bike style matches - and the "bicycle suit" style of apparel seems consistent with this dating (though those with a better knowledge of costume and clothing might discern more exactly - to me it's more generally "old timey" than precisely 1901 or 1907 ). So it seems most logical to date the picture to the period of their partnership or just before.

The first series of newspaper ads for their shop at 258 Commercial Street appears in March, 1901.

The last ad appears at Christmas, 1903. By spring of 1904, newspaper ads for separate shops start appearing and it seems clear they had dissolved the partnership.

Interestingly, in April of 1903, bike dealer (and future Buick dealer) Otto J. Wilson had brought the first car to Salem, and it is perhaps significant that bicycles don't appear in this Christmas Eve advertisement.  Seasonally, both Hauser and Shipp continued to advertise and sell bicycles into the late 19-aughts and early teens, but they had diversified into what we now know as general "sporting goods."

Lots of things were changing in the decade.  Both the NCAA and trade group Sporting Goods Manufacturers Association were founded in 1906, for example.  At this moment of transition, in fact, we can see the development in Salem of the modern sporting goods store with consumer goods for leisure activity, as well as the early stages of the redefinition of bikes as a kids' toy rather than advanced ground transportation and technology. (Yes, at one time a bike was like the latest iPhone or iPad!)

And as business rivals, friendly or not, Hauser and Shipp participated in the wider sporting and civic life of Salem.  Over they years they sponsored events and leagues - for bowling, tennis, canoeing, fishing, and shooting.  If they sold the equipment, they probably supported its use!

Baseball was also an important part of this - much like it is today for the Withnell dealership and its support for Legion ball.

Hauser and Shipp were also active in the Board of Trade, the Cherry Fair, and other forms of civic development and boosterism.

The shop's location, 258 Commercial, is longer around.  Today the site is a void, a parking lot between the Bike Peddler and the Old Spaghetti Warehouse. (Salem has had several rounds of address renumbering, and we cannot today look to the 200 block of Commercial for this old address.)

Below is the building before it was demolished. By 1970 the building to its left (on the north) is gone, and the exposed brick wall is the southern wall of Bike Peddler.  The tree line marks the lot line between the building that burned in 1966 and the one still standing in 1970.  (Compare to the image at top!)

The right edge of the image more-or-less bisects the storefront of 258 Commercial.

Today, the holes in the urban fabric (and holes in city budgets!) created by surface parking lots coincide with ever wider arterial roads and urban highways, and with a mania for free parking.  While the exact nature of the relationship is complicated and may even be unknowable precisely, the coincidence is more than merely random.  And whatever it is we're doing, it isn't working.  Maybe it's time for change.

Paul Hauser, Watt Shipp, and the lost building at 258 Commercial remind us that a vibrant downtown requires more than just more cars.

(Many thanks to Sarah Hauser for the family photo!)

There was a nice history note on Sunday about the Metropolitan Store, which included a photo of the building and continuous storefronts at top.  It noted that the building was demolished in 1972 after the store moved to 160 Liberty NE. 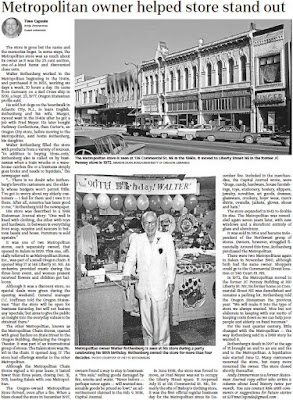 In the HLC packet for the Salem Main Street alley naming project is a nice early note on the buildings here.

Great post SBOB! Thanks so much for this. I think some urbanists refer to what has happened to downtowns like Salem's as "missing teeth."

Just in case there's some confusion, in the photo that's Watt Shipp on the left and my Grandfather, Paul Hauser on the right. Great post! It's fun to learn even more about my grandfather.

Thanks for the kind words, both!

Indeed, I was confused on the photo, and I have corrected the caption. Thank you!

In addition to silently cleaning up a few typos, other corrections:
1) Old Spaghetti Warehouse, not Spaghetti Factory
2) Panorama dating. I've located the event it photographed, and I am almost certain it's from late May, 1913. I'll blog about this at some point, but as it's a footnote, it's not a super high priority.

Added a history clip from the paper on the Metropolitan Store, which used the storefront discussed here after the bike shops had gone, and also here's a link to the discussion of the panorama date of May 1913.

Added a clip from 1906 on the Eckerlen Block.