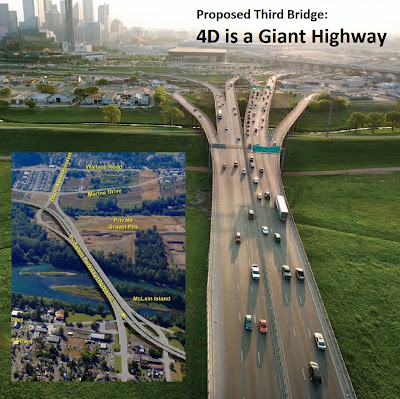 According to No Third Bridge advocates,


After hearing from those attending the meeting a vote was taken on opposing the 3rd Bridge. The result was a two to one vote in favor of opposing the bridge (28 to 10).

Neighbors heard from NO Third Bridge that Alternative 4D, which has the preliminary approval of the Salem River Crossing Oversight Team, should not be approved by the Salem City Council until there is a plan to pay for it. They also seemed swayed by the argument that expensive bridge planning efforts should cease immediately and attention should be given to improving access to and from the existing bridges instead of building a new bridge at an estimated cost of $687 million.

The Grant and Highland neighborhoods have also gone on record with opposition. None of the neighborhoods primarily affected - or ostensibly benefiting - from the bridge and highway are in fact in favor of it.

Next up is a City Council worksession on Wednesday the 28th and a continuation of the Public Hearing on Monday, December 10th.

If you haven't done so, consider emailing Citycouncil@cityofsalem.net to urge Councilors to refocus efforts on better and much less costly ways to improve mobility and manage congestion.

West Salem Neighborhood Association heard from several planners on Monday evening to discuss the Salem River Crossing project, known to some as the discussion about a third bridge.

Simmons delivered a PowerPoint presentation that highlighted the project’s goals, studies and the Draft Environmental Impact Statement, sketches of the handful of alternative plans, including cost comparisons and traffic impact assessments.

Sugahara said a key point Simmons made was that none of the alternatives developed are off the table, although the stated preferred plan (4D) has been put forward by the project’s Oversight Team.

Sugahara also reiterated what the planners have stated in other meetings, including Salem City Council, that the determination of a design is necessary before a financial plan can be developed.

Sugahara and Co-Chair Heather Swanson both noted that the meeting was attended by a contingent entitled “No 3rd Bridge.”

Swanson said many on hand urged the WSNA to urge the city (one of a number of entities involved in the SRC project) not approve a bridge proposal until there is a plan to pay for it, and to focus resources on existing bridges.

Sugahara said the forum included discussion of ideas, both supporting and not supporting an additional crossing in the Salem area.

The former included: the bridge is being built for the future growth of West Salem; the bridge has been discussed for a long time; a 3rd bridge is needed in the event of a disaster; augmented funding possibilities since this is a regional project.

Unsupportive ideas included: finances should be planned prior to selecting a bridge design; other options, such as easing traffic at bridgeheads, should be explored; Edgewater could be negatively affected; cost is too high; beneficiaries would be outsiders, rather than residents of West Salem or the greater Salem area.

Overall, the co-chairs were happy that dozens turned out to take part in the forum.

“This could be the most impactful project for West Salem over the next 50 to 100 years – positive or negative, nobody really knows,” Sugahara said. “So it’s important for a lot of people to have input into it.”

This makes it sound like there was no vote? And has Kenji taken a stance on it? Anyone know?

There was indeed a "no" vote. In my opinion there was too much focus on the $$. This is not the main reason I oppose it. I oppose it because it will continue to degrade the livability in W Salem and the data do not support its development.

Jeff: You (or someone from West Salem should) should respond to Justin Much to clarify that NA members voted 28-10 against a new bridge.