New Report Adds to Chorus on Decline of Driving - updated

The New York Times has a piece on the latest outfit to observe that we are driving less.

The PIRGs - the NY Times says US PIRG, the report's links point to OSPIRG - released another study documenting the decline in driving.  But you have to wonder, at what point will the news sink in?  The PIRGs might be too fringey to sway the mainstream.  I mean, how many times have folks documented the change to City Council and the Salem River Crossing staff?

But here is is again:
BikePortland chimes in with thoughts from an interview with ODOT Director Matt Garrett and the agency's reluctance to embrace change. 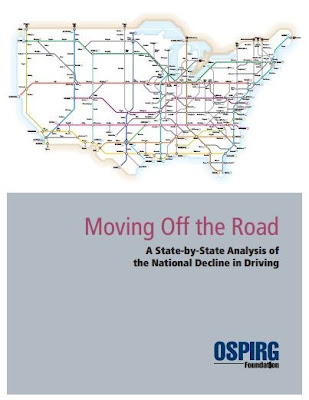 A couple of days ago OSPIRG released Moving Off the Road:  A State-by-State Analysis of the National Decline in Driving.


America’s six-decade Driving Boom lasted so long with such consistent increases in driving that it came to be seen like an immutable law of nature. The evidence suggests that there has been a long-term shift toward stagnant or even declining driving. It may be tempting to dismiss this shift as merely a temporary side effect of the recession, but the evidence does not support this view. Looking at state-level trends further confirms that the decline in driving is about more than an economic aftershock.

Accepting that the Driving Boom has ended presents an enormous opportunity. Our transportation system remains oriented to the goals of the 1950s, focused on creating new highways and expanded mobility for a new era of expanding automobile ownership. To the extent that driving rates no longer climb, it makes it easier for America to shift priorities. Revising forecasts about future driving will make it easier to achieve billions of dollars in savings by not building new highways and expanding old ones. It will be easier to dedicate highway funds to repairing and maintaining bridges and roads that are in disrepair. And it makes it easier to prioritize investment in other modes of transportation that are expanding rapidly, such as public transit, biking, walking and intercity rail.

The full report (31pp) can be downloaded here. 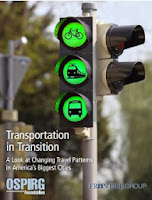 Transportation in Transition came out a couple of weeks ago and in it OSPIRG took another run at driving decline denialism.

Will it make any headway?

The full report (63pp) can be downloaded here.

The truth hit everyone eventually. It's hitting public works right now in the street maintenance budget. In support of their new regressive fee proposal they are showing data depicting how gas tax revenues are far less than projected because of the trend toward less driving.

So when we need to sell some new regressive maintenance fee that shifts more of the finance burden off of users and on to property tax payers--we need it because people are driving less.

When they want a new taxes for a freeway bridge--they tell us we need that because people will continue to drive more.

The streetlight fee thing? That's worth digging into more. Thanks for the reminder!

updated with a third report!