SJ Fails to Take own Advice: Whiffs on Third Bridge 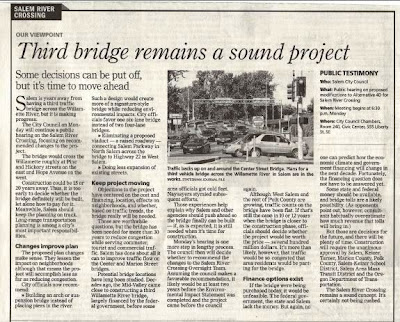 
Objections to the project have centered on the cost and financing, location, effects on neighborhoods, and whether, based on traffic trends, the bridge really will be needed.

Those are worthwhile questions, but the bridge has been needed for more than 30 years to reduce congestion while serving commuter, tourist and commercial traffic. Salem has done about all it can to improve traffic flow on the Center and Marion Street bridges.[italics added]

From an earlier note yesterday on assault and reporting at Willamette:


But that also was a lesson for student journalists: To be effective, they can't just spout off. They have to back up opinions with evidence and they have to present all sides of an issue.

Instead of talking right over "objections to the project" and dismissing them by fiat and circular logic -"the bridge is needed" because we need a bridge! - the SJ refuses its own advice to "back up opinions with evidence" and "present all sides of an issue."

(At least they did publish a counter-point from 1000 Friends just below the editorial, but is significant they did not hold one of those "editorial board" lunchtime meetings with critics and with supporters.  It's hard to see that the SJ has taken strong measures on both the reporting and the editorial side to investigate the project thoroughly.)

Maybe most crucially, it is far from proven that Salem has done all it could do.

Indeed, in January, on the same editorial page, in a column titled "You and I are environmental hypocrites":


Altered work schedules. I’d bet that most of Salem’s traffic congestion could be eliminated if public and private employers radically changed their work schedules and fewer people were on the roads at the peak hours.

It's hard to square "most of Salem's traffic congestion could be eliminated" with "Salem has done about all it can do."  And if opinion changed from January to May, then that deserves a much longer discussion.  That's a giant inconsistency to pass over so lightly.

WESD and Courthouse Square have got tons of reportorial resources applied to them.  The proposed giant bridge and highway is in cost more than an order of magnitude greater, hundreds of millions rather than tens of millions. By this calculation it is reasonable to ask whether 10x the staff time should be allocated to investigating claims and intellectual honesty in the DEIS about the giant bridge and highway!  The case is far from proved, and the SJ has an actual job to do in "backing up opinions with evidence" on a once-in-a-generation sized project.
Posted by Salem Breakfast on Bikes at 11:00 AM