Mid-Century Modern in Salem: Four Buildings Better than the Bank

In Jeffrey Tumlin's talk last month, one of the very last things he mentioned was the role of beauty. He didn't give it much air time, and he admitted that it was a problematic topic due to differences in taste among individuals and beauty's resistance to being quantified and measured.

The notion's in the air, happily enough.  Though Jeff Speck doesn't use the word, his criterion of the "interesting" walk suggests he'd agree beauty is an important ingredient.  Something "friendly and unique" is often going to be something attractive, even beautiful. His Step 7 on shaping spaces and step 8 on street trees, also point to the aesthetic dimension of walking and perception.  So even if he doesn't mention beauty outright, beauty is lurking in the background of several of his points.

Back in February, in a comment on a note about the Belluschi Bank, Jim threw down a challenge,"What building have we built in Salem since 1940 that is as good as this one?"

Salem doesn't have a lot of mid-century architecture, and in addition to needing to think about the virtues of simply reusing existing building stock, we are also now at the point asking how much of it we should be preserving as historically or architecturally significant.  It is, unfortunately, also an era that has produced some terribly ugly things, and the general style cues don't very often say "beauty." More often they say instead things like "order" or "function," or "exposed," and it might take effort to see something interesting or even beautiful.

With the Saul Zaik home tour in Portland, the Gordon House tea getting press for Mother's Day, mid-century has been in the air lately - since Jim threw down a good question, here's the start of an answer!

There's more interesting mid-century architecture than you might think in Salem.  Making a case for other buildings as better than the Belluschi Bank is not as difficult as it might seem.  There might not be a lot of them, but there are a few!

As for their contexts and streetscapes, they aren't integrated much into an urban fabric, unfortunately.  Too often there are parking lots or other empty space around them.  Isolated beauty or interest will only take you so far.  To really generate life and liveliness, beautiful and interesting things need to be available to scale up, to participate in larger patterns of beauty and interest.  The unit is, after all, the stroll and walk, an aggregate of multiple glances, unfolding in time, and not the single look.

Still, even in isolation, there are some mid-century buildings worth noticing.  They might not be world-class or even significant regionally, but there are some modest and hidden gems.

Let's start with a church!  (Didn't expect that, did you?)  Another blogger has written an appreciation of St. Mark's Lutheran Church, and in answer to Jim's question, I want to concur and suggest that this is Salem's most beautiful mid-century building (even if it's not really classic, boxy modernism).  By a huge margin, it is unquestionably more marvelous and more beautiful than the Belluschi Bank!  It even has a relief in marble - and a fancy-pants east coast architect.

In second place is the Virgil T. Golden funeral home, across the street from the library.

It's got a really interesting set of blocks and volumes, accented by curved moderne glass tile sidelights.  And of course the oak tree.

Also across the street from the library, and next door to the funeral home, in third place there's a mid-century strip mall thing that's actually rather interesting.  The brick work and other detailing seems like more than merely ordinary.  Does anyone know more about its history?  I wonder if there's more to say on it.

Notice what I call the cornice, the slabby, overhanging roofline.  This detail is echoed in a lot of CB|Two's work around town.

Finally, there is the YWCA building of Belluschi, which I would rate only the 4th most interesting modernist building.

It was hard to come up with a fifth item for the list.  Candidates?

And you might ask, what about those not on the list? That Belluschi Bank and his County Courthouse are not beautiful.   Breitenbush Hall at the State Hospital isn't either.  Even many of his buildings on the Willamette Campus don't have much character - except perhaps for Smullin Hall, the old library, which is charming as his earlier libraries in Corvallis and McMinnville have seemed also to be, though since it dates from the late 1930s it falls just outside Jim's criterion.

Mid-century architecture is somewhat invisible in Salem.  So there's certainly more out there.  (Not to mention the residences!)  What are your favorite mid-century buildings? Maybe there's a googie diner out there?  Are there any high modernist boxes that are terrific?  And what about interiors?  The library at Mt. Angel Abbey isn't all that distinctive from the outside - but the inside could make a believer out of the most hard-nosed atheist, it's that beautiful.  It is easily the most glorious building in Oregon.

So this is hardly offered as a complete or especially considered list.  It's just a start - can you add to it or quibble with it?

Here's one!  The old service station at Court and Capitol. It's got these great angles and wings! 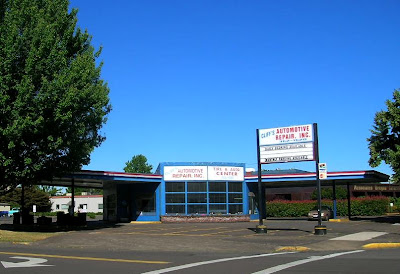 Nice post SBOB. I tend to agree with your choices, but I still like the bank. The bank really needs a big Oregon flag flying outside the front on the flagpole. I think I like the courthouse better than you too. It looks much better since that guy plowed into the front door and they were forced to renovate it. And so glad to hear you like the Alvar Aalto library at Mt. Angel Abbey. More Salem people need to take the trek to Mt. Angel to see it. It's open to everyone. A masterpiece right here in our own backyard.

One of the great bike rides around here is through Howell Prarie to the Abbey!

Also - by email a reader submits ODOT-HQ as a favorite mid-century building.

In conversation recently, Jim pointed out a neat little street that was developed with mid-century modern houses! Woodmansee Street, right by Woodmansee Park.

Anyone know the history of this little development? The houses are all of a piece, and there might be an interesting story there.