No Third Bridge signs are sprouting up, and here's one from over the weekend! 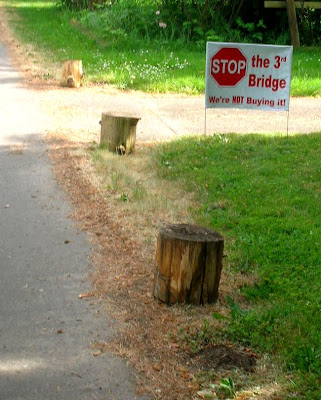 Tonight Council takes up the continued public hearing on the bridge. In the staff report packet, there's but one letter in support, and it just recapitulates in writing testimony given in person on April 22nd. There's nothing new.  In opposition are several letters and an increasing number of neighborhood associations.

It's striking how little support from the public there has been, and how the support when it does show is characterized by vague generalities - in a real contrast with the specificity and detail in the arguments by opponents. An impartial judge might or might not score it a knock-out, but would certainly give opponents the win on points by a large margin.

Nevertheless there a sense that supporters have simply plugged their ears and refused to listen. There's no sense they are actually engaging the arguments against the giant bridge and highway.

Anyway, at this point there's nothing new to say about facts and arguments.

The political process, however, might be worth watching.  Behind the scenes conversation suggests there might be change in the wind - and so it is imperative for a show of force at Council to help nudge things in a constructive direction.

Especially if you haven't been to Council yet, consider going in the strongest possible way!  The forces of rationality request your attendance!

The Minto Bridge.  There's a simultaneous action in the Urban Renewal Agency and City Council to provide $750,000 in Urban Renewal Funds as a local match for a $750,000 Oregon Parks and Recreation Grant.  (Three reports!  One, Two, Three.)  At least theoretically, this looks to complete the funding.   Current and planned committments total $6.5 million, anticipated cost is $8 million, and this combined $1.5 million would look to close the gap.

There's a move to study the code on street trees and make some recommendations related to planting, pruning, and removal.

The report on a Micro Enterprise Food Manufacturing Accelerator Feasability Study is actually kind of interesting as a study in the role of networks and realism for Salem business development.  If it weren't for the bridge, it might be worth looking at in more detail.  Maybe for a future note.
Posted by Salem Breakfast on Bikes at 7:00 AM