Tonight's I-5 Bridge Collapse Reminds us to Preserve and Maintain First; Third Bridge Can Wait - Updated

This is terrible. Tonight multiple media are reporting that a section of the I-5 Bridge over the Skagit River has collapsed. 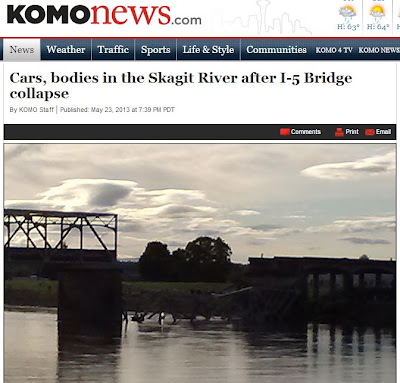 Some have suggested that it is the bridge on WSDOT's list of "structurally deficient" bridges.

The bridge seems to have been built in 1953.

As we consider a giant bridge and highway for $800 million, this is a reminder that the Marion Street Bridge is also rated "structurally deficient," and the Center Street Bridge just above the threshold for "deficient."

We need to focus on repairing, preserving, and maintaining before we think about building a new giant bridge and highway.  Really.

So now we have some facts. From the Seattle Times:

It was "functionally obsolete" rather than "structurally deficient."  By contrast, the Marion Street Bridge rates 6/5/4 and 29.7 - the Skagit was 5/6/6 and 57.4.  The Marion St. Bridge is rated "structurally deficient."  The particular design of the Skagit Bridge also meant that it was "fracture critical," and liable to failure at a single point - like a truck strike might create.
Posted by Salem Breakfast on Bikes at 8:05 PM

updated with info about bridge