Fences and Streets: How we Configure Park Edges

With Hood View Park on Kale Street NE opening this weekend, it will be interesting to see how it relates to the rest of the neighborhood. In many cases the edges of our parks are hard borders, fences or other inactive and non-permeable borders.

I think that Bryan Johnston Park is the most recently completed park, and it makes for an interesting comparison.

While Bryan Johnston Park has a nicely open edge along Mildred Lane, the rest of the edge is strange.  Across the street the houses and yards are all fenced, and back into the park.  The whole development, in fact, is fenced along the sidewalk, and the fence almost looks like a sound barrier you'd find along an urban or suburban highway!  Though Mildred has little auto traffic, and has very few intersections and turning possibilities, for future development it is today classified as a "minor arterial" and built to a three-lane standard with a continuous turn lane.  You can see a pedestrian island in the middle of part of it, where the turn pocket is completely superfluous, with no turn movement across traffic into the park possible.  Mildred is over-built here, and the wish in current standards to control access on a minor arterial means that all the houses have front doors facing the other way on a parallel street one block up on Mountain Vista Ave.

By comparison, let's look at one of Salem's favorites, Bush Park, an older park. If the houses along Mildred all back onto Bryan Johnston Park, the houses along High Street all have front doors and front yards facing Bush Park, as if the park were an extension of the front lawn!  High Street is classified as only a "collector," but it has a lot more traffic, and it's only two lanes wide.   But the edges and permeability here are all far more active than along Mildred!


A park in the middle of the time-frame is Fir Crest, having been completed in the 60s and 70s, I think. It would be interesting to learn more about what the neighbors think of it.

It has three points of access, each a narrow path entry at the terminus of a cul-de-sac.  Though it has a central open area, it is ringed by a dense "forest" of firs and many areas have brambles and bushes.   The neighbors all have fenced their back yards and use the bramble zone as additional buffer.

The park might not feel very safe.  There seems to be little activity in it, and even fewer eyes on it.

(Englewood park is also a "forest," but it fronts a street, and has many more eyes on it.)

So what about Hood View?  Here's the City's plan for it: 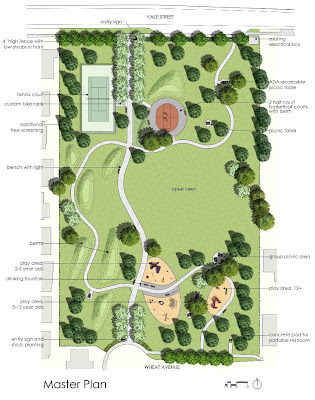 You can see the fence lines where the back yards of houses will back into it along the sides, and that perimeter is much longer than the portion with sidewalks and street.

In the new City Parks Master Plan, though I did not read it closely, I don't remember seeing much if at all about the relationship between development and parks and about edge conditions.  I suspect that the development is "private," the parks are "public" and we don't have an adequate framework for talking about and negotiating the relationship between these two different kinds of property.  Since the transportation system will often mediate a transition between them, where there is not a hard fence, maybe it's even a triangular relationship.  You know, Bush Park works the way it does along High Street because there is a street and set of sidewalks between the public park and the private residences.  It's a soft boundary rather than a hard one.  Pringle Creek Community also looks like it will these soft boundaries of open streets to good effect.

If Bryan Johnston Park endures and is loved, it will be in part because it has a broad front along a street.  Unfortunately that frontage will be active on only one side of the street, and will lack the dynamism arising from activity on both sides.

Considering how terribly car-dependent is this neighborhood by Bryan Johnston Park, it is too bad that there's not a small corner grocery or deli and streetcar-scaled commercial pod adjacent to the park.  Our "allergies" to "commercial encroachment" in residential neighborhoods hampers our ability to create lively and safe parks.  With multiple uses at and near a park, there would be waves of people using it for different reasons and at different times.  That's good activity, not bad!

If you have been to Hood View Park or been involved in its planning, what are your thoughts?
Posted by Salem Breakfast on Bikes at 12:01 PM

Mildred Avenue..."overbuilt" is a really apt description. As a consequence of this, speeding cars is a constant problem. 50 mph is not unusual, even though the posted speed limit is 35. It is also a favorite for "hill hopping" between Sunnyside and Lone Oak, usually in the evenings and late at night.

I think the fences along Mildred are there to muffle the car noise, as well as provide privacy. Whatever the reason, it's less than ideal as far as the sense of community goes.

Ouch. 50mph! Even though it's a "minor arterial" a posted speed of 35mph also seems excessive or near a park site.

Thanks for the additional detail!