Memorial Day is on Monday, and as you consider your own memorials and obsequies for departed family and friends, it's also nice sometimes to wander a little, to pay respect as we can to those we don't know.

One significant site in Salem that seems to languish and may not get enough love is the Mount Crest Abbey Mausoleum in City View Cemetery.  Designed by one of Oregon's most important architects, it is nevertheless off the beaten path. 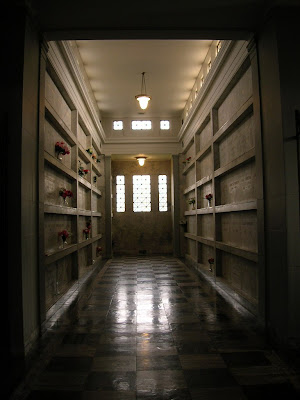 The exterior is a little severe, and the massive doors are hard to swing open.  It might take a little courage to pass through them.  The interior is all classical, row-on-row of identical crypts, symmetrical and ordered.  It is a place for the modern refrigerium.

The promise for the mausoleum was "a better way," more scientific and civilized.


That we, in this twentieth century, are becoming broader and more progressive in our views, not only in respect to those things which concern life, but death, is indicated the growing sentiment in favor a more scientific way of burying our dead. This is quite as it should be, for we have much to learn from ancients to the disposition of the the remains of our loved ones, and who shall say that burying in the ground is more civilized than placing the dead in the boughs of trees, as the American Indians did before they adopted the ways of the white man? At least, out on the plains and in the depths of the untrod forests, the mortal remains were placed in more agreeable surroundings than under the ground exposed to the ravages of vermin and permitting the chemical decomposition with results directly at variance with the efforts of the living to place the bodies of the dead in decent, not to say luxurious, habiliments.

[A]ll dangers of contagion by the living visiting the burial place of the dead, as is the case in cemeteries are absolutely eliminated. Each crypt is equipped with drain pipes through which the gases are conducted to the disinfecting receptacle to to be purified before being released into the open air.

These beautiful mausoleums may, therefore, be visited as freely as desired, and in all kinds of weather.

They are sold just the same as real estate, title being given without taxes or assessments. The purchaser is given a key and permitted free access at all times, and from the sale of each compartment a certain amount is set aside to provide an annual income sufficient to maintain the building in first class condition.

The idea of a "community mausoleum," contrasted with the "private" and family mausoleums already existing down the hill in the Pioneer (Odd Fellows) Cemetery, and elsewhere around the country and world, seems to have been a new one.  A trade article from 1929 suggests the idea arose in 1907, a half-decade before the planning would have started here.  The community mausoleums were also, apparently, in many ways a new product line extension, and the writer of the piece "always believed that a cemetery was a business enterprise, not a philanthropic institution."

Design for the community mausoleum was given special attention.  Although it is not certain that Ellis F. Lawrence himself personally designed the mausoleum, his firm executed the design, and in the same year it was dedicated, 1914, Lawrence became the first Dean of the University of Oregon's School of Architecture.  Just before the mausoleum, in 1912 he finished up the Masonic Temple.  Later, in the mid-20s Lawrence designed the Elsinore Theater and Mahonia Hall.  He was no ordinary architect for Oregon, and the mausoleum is therefore a notable structure in Salem.

Curiously, the mausoleum is not included as a "local landmark" or is listed on the National Register.  Though seven governors, many mayors, and lots of other local notables are interred here, officially the City of Salem does not seem to regard it as historically important.  Perhaps City View Cemetery has not been interested in listing it.  Either way, it's an interesting omission.

Inside, the finish detailing shows lots of marble and other fine materials.  There are several stained glass windows, and it's even possible they are from the Povey Bros, the northwest's leading producer of the colorful windows.  Deepwood, the Elsinore, and the Supreme Court building all have them and it would not be surprising to see them here.


Construction and advertising for the mausoleum both seem to have started in August, 1913. The reinforced concrete promised to endure through the ages and the writer in 1929 said "reinforced concrete offers the ideal construction throughout."  Many of the bridges in Salem executed under Conde McCullough's influence were also constructed out of reinforced concrete, and it was clearly an attractive material for planners and designers and in fashion more generally. These and others, almost all having been built between 1912 and 1935, are nearing the end of their lifespan, however, and it is an interesting question how the reinforced concrete here is holding up.  This may be another reason to give the mausoleum more attention.

Its dedication on May 30th, 1914 attracted the city's leaders.  Again the dominant notes were the modern cleanliness of the mausoleum and the prospect for its endurance:


Hon. H.L. Stevens, mayor of Salem, acted as chairman of the day and made the introductory remarks. After outlining the idea and purpose of the community mausoleum, Mr. Steeves went on to say that many people had a horror of the damp mouldering grave and that as a result modern people had copied from the ancients and yearly more mausoleums were being dedicated in all the principal cities of the United States.

The famous mausoleums of antiquity are standing in a good state of preservation today, and although in those days their use was limited to royalty, the remains of the ancient kings were consigned to a much more sanitary resting place than the great majority of the present day dead. Modern mausoleums, however, are constructed to last as well as did the mausoleums of the ancients, and the prices charged for crypts are within the reach of the common people's pocketbooks.

Recently you may have seen the story about the Eugene funeral home that offers a bamboo casket and tricycle hearse.  It is interesting to see how funeral customs continue to evolve.

There are many other 19th century cemeteries scattered around Marion and Polk counties.  If you're out for a bike ride, pick one that is public and make a visit.

For the weekend, here's contemporary music from an American Original. "Decoration Day," the second movement, completed in 1912, of Charles Ives' Holidays Symphony.

Email ThisBlogThis!Share to TwitterShare to FacebookShare to Pinterest
Labels: The Year of 1913