Entangled in the Use of Force Question: Execrable Conditions for People who Skate and Bike 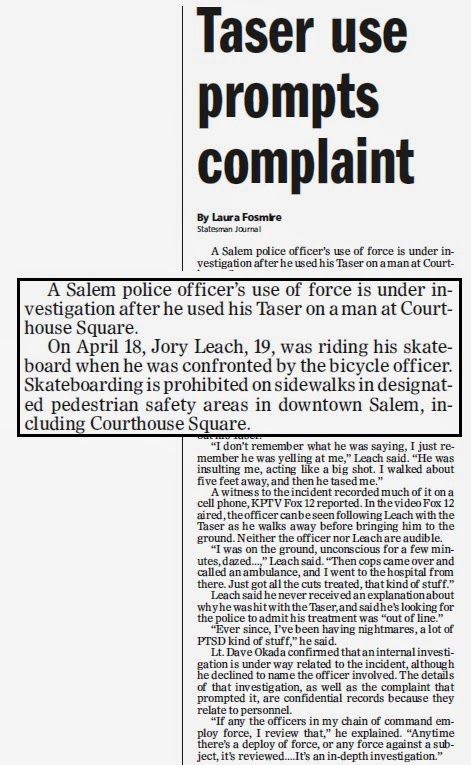 Basically it's reasonable on crowded sidewalks to ask people on bike and on skateboard to dismount and walk.

But you know a big reason why compliance is so problematic?

Because the streets are so crappy for people on bike and on skateboard!  (If you're reading here, of course you know - even the police don't bike in the streets and, ironically, they model all the wrong practices.)

If people, including police on bike, felt safe and comfortable in the street, where they belong, there would be a lot less biking and skating in inappropriate places.

But instead we create an exquisitely calibrated double-bind:  Since biking on the sidewalk is prohibited, we force you to contend with two-ton armored personnel carriers. Don't feel like contending with machines that will kill you? Violate the law on the sidewalk - and maybe get tased.

Either way you're punished.

But through the City's Downtown Mobility Study, there's already a set of recommendations soon to be adopted formally into the Transportation System Plan.

Going back to the SDP greenscape concept could complicate things and just introduce extra wheel-spinning. Instead, folks should consider embracing the existing process and pushing the City to accelerate funding and implementation for the mobility study recommendations. The plan's not perfect, but it's what we have and it can be modified and improved in the future.

Either way, though, when we create a complete street system for all downtown visitors and residents, there will be fewer opportunities for kids to get tased for ambiguous behavior in equally ambiguous zones.
Posted by Salem Breakfast on Bikes at 12:30 PM

"Don't feel like contending with machines that will kill you? Violate the law on the sidewalk..."

Not the only option, though. Not even the most obvious option, which is to get off your bike or pick up your skateboard and walk through downtown, because when you're riding a bike or skateboarding on downtown sidewalks, you're not just choosing to violate the law, you're choosing to endanger non-nimble pedestrians also using the sidewalk, and you're doing this for your own convenience (presumably to save you time, as walking is slower than riding).

I know there are fewer and fewer people in this world willing to slow down or inconvenience themselves for the sake of folks not personally known to them, but I don't think it's quite accurate to suggest that the proximate cause of this unfortunate incident was our unenlightened transportation policy decisions.

"it's reasonable on crowded sidewalks to ask people on bike and on skateboard to dismount and walk."

"Scorching," running down or inconveniencing people on foot by accident or intent, as it was known in the late 19th and early 20th century, is pernicious.

However, if a mark of good design is that desired action/outcome seems like the "natural" action/outcome, then we have failed miserably with our streets and sidewalks.

It should be "natural" for people on bike and on skate to be in the street. Bear in mind that the exclusion zone is several blocks wide - perhaps a 1/2 mile.

I think that the last half-block of a trip can be on foot, but that it is not reasonable to have systems that require people to dismount for several blocks.

Maybe a better example is a family who wants to bike to Riverfront Park.

They might find a combination of calm streets and quiet sidewalks in residential areas, but once they reach downtown, they must contend the "the machines" or dismount for several blocks.

Additionally, the important point, and perhaps it was not clear enough, was not so much about this particular incident, but about the frequency of incidents - about sidewalk behavior in aggregate, like climate rather than weather.

All over the world cities are coming up with enlightened transportation policies that enable pedestrians and cyclists to travel safely without interfering with each other. Salem can do it too.