Tuesday the 27th is full of meetings.  In addition to City Council, the Policy Committee for our local Metropolitan Planning Organization, the Salem Keizer Area Transportation Study, meets at noon.

On the agenda (agenda and full meeting packet here) are ConnectOregon V rankings for all of ODOT region 2 as well as a request for a letter of support for Third Bridge TGM grant.

But first a very brief Memorial Day excursus. The World War II Memorial is nearing completion and will be dedicated on June 6th, the anniversary of D-Day. There have been several stories in the paper about it, and there will be more.
It will be a significant public space and plaza on the northwest corner of Willson Park, and it is much larger and more visible than the cluster of other war memorials near the Department of Veterans Affairs on Summer Street.

Bikes were used at the Normandy landings, in fact. Unfortunately for the Canadian soldiers who were using them, they were not very effective and may have caused more casualties.

In an earlier time, the US Army 25th Infantry Bicycle Corps is also very interesting. And of course our Interstate system owes much to President Eisenhower.

There's nothing really new on the ConnectOregon rankings.  The region has 31 projects total. At the top, the Eugene bike/ped bridges project slides down to #2 behind an Astoria airport project. The Dallas rail hub goes to #3. Locally, the South Salem Transit Center funding is at #6, the Kroc Center path at #17, and the Bike Pods of Oregon at #23. Statewide in the final list, I suspect the line between funding and not funding will be drawn to include the Transit Center, but not the Kroc path. We'll see.

About the TGM grant, probably the less said the better.  For a detailed critique, see here.

Here's the proposed letter of support: 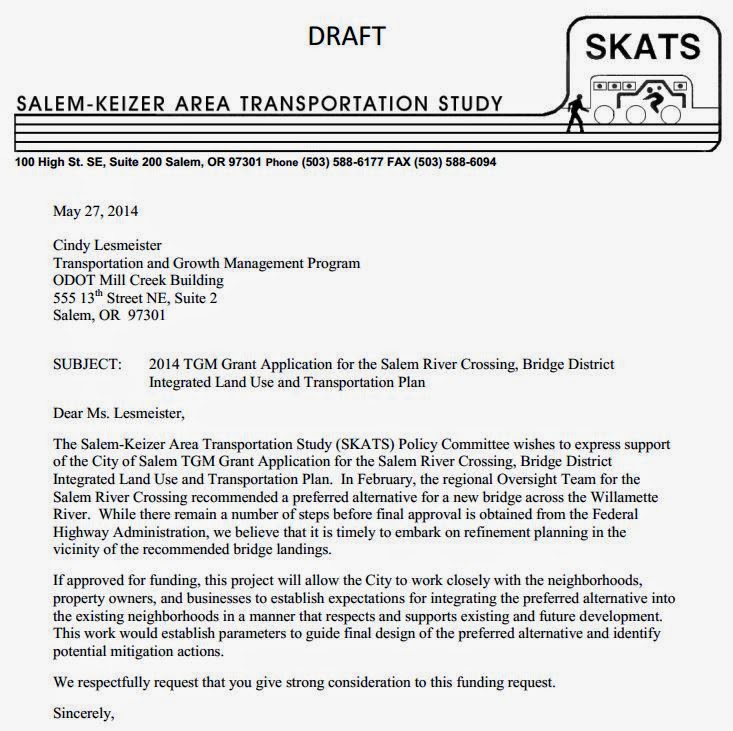 The draft Transportation Improvement Program for federal funding in 2015-2020 is out.  There will be a Public Hearing on June 24th. See the special TIP site here for details.  For a discussion of the TIP see previous note here.

Also, a Salem River Crossing Open House will be on June 11th. (As that approaches we'll have more information and discussion.)  There will also be materials on the TIP at this Open House in advance of the Public Hearing.

SKATS Policy Committee meets at noon on Tuesday the 27th at 100 High St. SE, Suite 200, above Bar Andaluz and the former La Capitale.
Posted by Salem Breakfast on Bikes at 10:00 AM