Why Can't we get Sidewalks?! Trouble on the Edges at Planning Commission

When Kuebler Road went in, Boone Road was orphaned: Interrupted and cut off, the old country road was no longer very important and it was neglected.

At the Planning Commission on Tuesday, an appeal of a proposed development out south has to grapple with our history of disinvestment and the way we fail to apportion the costs of development properly.

The Commission will also look at a proposed annexation and upzoning out east near Cordon Road.

Back in January at Council you may recall an off-hand note about dedicating two right-of-ways for park/path connections off of Battle Creek Road.

On Monday the Planning Commission will look at an appeal brought by the Neighborhood Association of the same development, whose terms include sidewalks on Battle Creek Road, but not on Boone Road/Reed Lane:

The nut of the City's case seems to be that part of the land, the parcel in the elbow of Reed Lane and Boone Road, was already developed some 30 years ago: a) there's no new development here to trigger sidewalks and b) we can't retroactively require sidewalks for development from a generation ago:

However, the memo from Public Works on which the decision depends is rather vague and doesn't address the retroactive aspect: 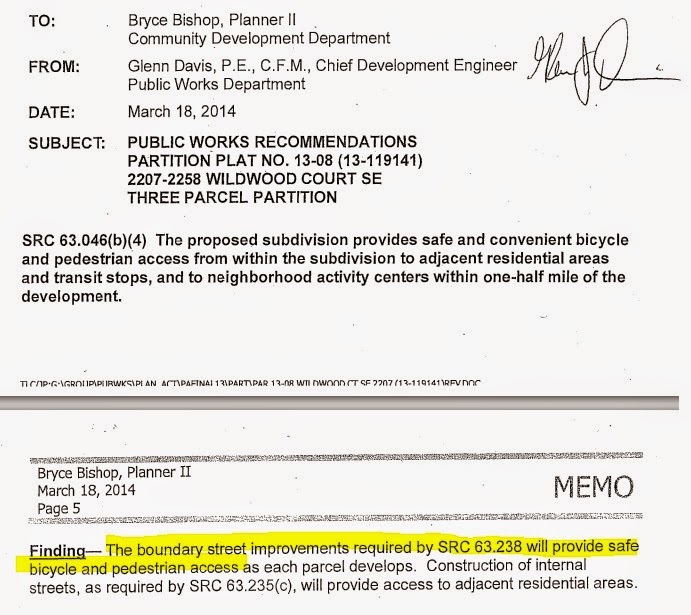 The assessment, that "the boundary street improvements...will provide safe bicycle and pedestrian access" to "adjacent residential areas and transit stops, and to neighborhood activity centers" is asserted by fiat only, without any analysis or proof, and in fact is almost certainly false. If, for example, from the proposed development you wanted to walk to the old Pringle School, where a new neighborhood commercial development is going, no boundary street improvements on Reed/Boone will provide safe bicycle and pedestrian access. From this angle, the proposal fails to meet SRC 63.046(b)(4).

Perhaps more crucially, there is a disconnect between talk about "within the subdivision" in the SRC cited and "boundary street improvements" which are not "within" the subdivision in the subsequent "findings." That looks like a bit of a non sequitur! (At any rate, three different SRC are referenced, and it's not clear how they all relate.  Here's chapter 63 on subdivisions. Maybe some readers will have expertise here?)

Not a Case of a Big, Bad Developer

If we want to know why things don't work in Salem, this might be a good case. The developer is one of those in Salem who probably deserves the benefit of the doubt - and yet, things still aren't right.

The developer, John Miller, is married to a former mayor and director of Family Building Blocks, and should know all about the problems in getting sidewalks.  He is redeveloping the old Pringle School to be "a lively destination marketplace" with "flexible Neighborhood Commercial zoning" and you'd think would want sidewalks to his commercial hub.  He's also a principal in Sequential Pacific Biodiesel.  His Wildwood group holds Mahonia Vineyard, Mahonia Nursery, and developed the East Pringle Innovation Center that currently houses Wandering Aengus and Fresh and Local Foods (formerly Organic Fresh Fingers). This is not shallow. You might not agree with every aspect of it, but it's working in pretty good faith the seam between commerce and sustainability.  By Salem standards he's a capital-G-Green, someone seriously pushing the envelope here!

And yet, the City doesn't have systems in support of "doing the right thing" and it is apparently too costly.  In protest of the appeal Miller writes:


The comments related to the review of the environmental issues...are especially disturbing given our company's stellar environmental record...The wildlife mentioned are actually seen and heard not just on the proposed site but in our adjacent existing development, Woodscape Glen, which includes hawk nesting boxes, a native plant demonstration area and carefully preserved native white oak and Douglas Fir. Comments in the letter...can easily be dismissed not just by existing protective regulations but by observing the bioswale that is in our existing development and dates from days that the City required stormwater to be put in underground pipes and we proposed and pioneered open faciliites.

I'm sure hawk nesting boxes are a lot cheaper than a full sidewalk, curb, and gutters. But it's fair to point out that given the system we currently have, his companies are among the leaders of green development. He's not out to trash the land.

And still, it's not enough. We don't have the right systems in place to get the outcomes we all want. It's not just procedural, either.  It seems unlikely that the rules haven't been applied correctly.  It's that we don't have a system designed to ensure sidewalks, that make sidewalks and appropriately located development a genuine and urgent priority.

Whether the Neighborhood Association prevails here - and on the surface, from here it looks like they will have a hard case to make - the bigger problem is that we need to change our systems.

An Annexation and Upzoning 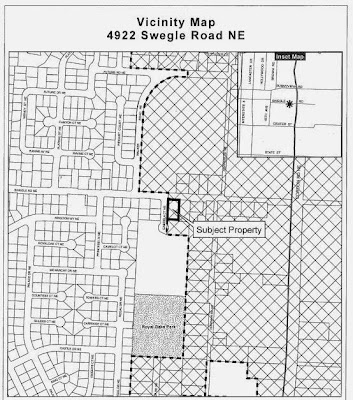 Is there any reason for the City to consider low-density, car-dependent land that doesn't meet current development standards for annexation into the City and upzoning for even more car-dependent higher density? Why?

It sure seems like we should be prioritizing the development of walkable, transit-friendly parcels inside the city limits, and should just simply forget about upzoning parcels not inside the city.

This is a great example of why we need to focus on redeveloping the North Campus of the State Hospital, Fairview, Boise, and the O'Brien parcels in downtown, and forget about this stuff on the edges of the city, especially when it is already outside the city and will require investments in city infrastructure. It's not sustainable - not environmentally, not fiscally.

Some years ago ELNA had a similar issue with a subdivision that was not connected to the rest of the world by an improved street. The City held that it could not require off site improvements. ELNA held that there must be a safe passage to access a subdivision. The developer was only required to have a paved access street that was 20 feet wide and had gravel walkways. We wanted 28 foot wide street with curbs and sidewalks.We lost our appeal to the Planning Commission. So, we filed an appeal to LUBA.

We were able to have the developer grade and prep the street. The city paid for the extra pavement and then the developer put in the street and curbs as they did the rest of the development. Then we contacted Chemeketa Community College that had a class in laying concrete to do the sidewalks. The city provided supervision so that it would be done to Salem standards.

This project turned out to be a win-win for both the neighborhood and the developer.

I do not think that anything has changed in the current City policies that allow for off site connectivity or safety.

Perhaps there are funds in the remaining street bond. At the very least the Neighborhood Association needs to make sure the area is in the next street bond with the highest priority.

As you say SBOB, it's not a case of big, bad developer. What it is is a case of Salem being a city in name only. People here think of sustainability in terms of discrete "green" things: solar panels on a roof, a bioswale around a building or using the recycling bin, for example. Or it's all about local food and local business. This is all great but way short of the kind of systemic thinking that's needed

SBOB is the only Salem group I've found so far that gets that urban sustainability requires thinking about the city as a system and it requires compressing distances: home/work/school/shopping/services/entertainment/recreation. Compressing distances means density and mixed use.

All those apartment complexes on the fringes never made any sense to me because, even if there were sidewalks, there's nothing to get to without using a car.

Meanwhile, in central area neighborhoods, where density and mixed use development could really complement each other, Salem looks, feels and acts like a 1950s era suburb. And that seems to be the way people want it to remain.

Dang! On the one hand, that's a great story about a creative solution in a difficult environment, Susann!

On the other hand, the solution doesn't scale - you can't reliably repeat it around the city in different places, and it's not something you can bake into an "official" process. It can't become a normal solution. I don't read you as suggesting it should be replicated as an expected solution, but it's a reminder that we should have systems in place that will reliably fix these things and not have to depend on instances of special bond funding.

(@Laurie - It's funny, I struck out a draft paragraph on our propensity for "gadget green" solutions here, so you're exactly right to read a subtext of critique for discrete green elements!)

SBOB, since we're revealing deleted draft paragraphs here, I deleted a paragraph that suggested that one reason so much of Salem's ornamental emptiness is empty is that most people have their own back yards and are not inclined to use public space on a regular basis.