Unremarked upon, as far as I know, the Mount Crest Abbey Mausoleum will observe a century this weekend.

It was dedicated on Memorial Day in 1914, and so you have your choice of recognizing its 100th anniversary on this Memorial Day or on the 30th.

While it was built with great optimism, like all structures of concrete from this era, it is deteriorating, and without maintenance, the structure is certainly not going to last another 900 years.


City View will be busy this weekend with formal and informal obsequies, and if you get a chance, the mausoleum is worth a visit. Designed by Ellis Lawrence's firm, it is architecturally notable for Salem.

Even more important are those buried in it.

As the Hospital considers demolishing Howard Hall, as the Dome Building at the State Hospital is also at risk, and as Salem struggles with the perennial question of how much of the past to retain and cherish (and sometimes, yes, critique, too), a contemplative walk through the mausoleum might be tonic.

For more on the Mausoleum and Ellis Lawrence, as well as further links, see the longer note here.

It's remarked on now!  Here's a front-page piece in the paper. That's nice to see. 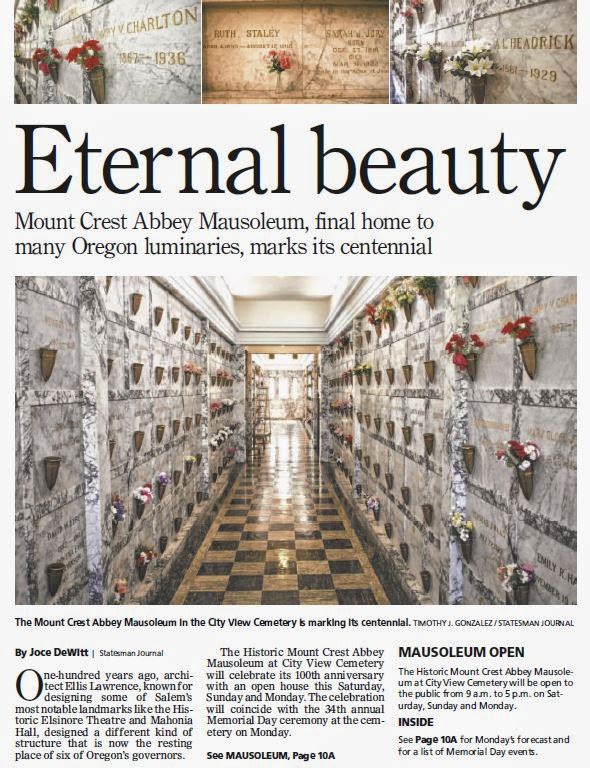 Details from the piece:


The Historic Mount Crest Abbey Mausoleum at City View Cemetery will celebrate its 100th anniversary with an open house this Saturday, Sunday and Monday. The celebration will coincide with the 34th annual Memorial Day ceremony at the cemetery on Monday.

The public is invited to learn about Salem's history in walking tours that will allow guests to read narratives of 44 individuals interred at the mausoleum, including governors, congressmen, mayors and business owners, over the weekend starting Saturday, May 24, at 9 a.m.

(Thanks to a commenter for flagging this last night!)
Posted by Salem Breakfast on Bikes at 12:01 PM

The paper's got a piece tonight. Turns out there will be organized tours and some celebration -
http://www.statesmanjournal.com/story/news/2014/05/22/resting-place-oregons-political-elite-celebrate-th-birthday/9470419/

Thanks for the link! It made it to print, too, on the front page.