Tomorrow, Wednesday the 21st, City Council will hold a work session on the Police Station and Civic Center.

Critics of the City's proposal have identified important flaws in the public process and also raised questions about the total cost. Remarkably, even in a highly contested set of Council elections, together the candidates have landed on a consensus position that there are problems with the City proposal.  So far, so good.

But the critics' own proposal has important flaws of its own.

Two pictures, two perspectives, really sum up the disagreement on the $20 Million proposal for a police station:

Do you see an isolated, car-dependent building next to a golf course and Interstate?

Or do you see a building renovated with great thrift?


One view, a close-up view, is all about budget and thrift, and a focus on the form and cost of the building alone.

Zooming out a bit, another view is about access in general, environmental and economic justice, and neighborhood livability. On this view, the way a building fits into the neighborhood fabric and wider city transportation networks is an important factor.

The position here has been that starting with a budget and looking at the project principally from thrift is going to get us a cheap, car-dependent, Walmart-style police station that doesn't much help city vitality. 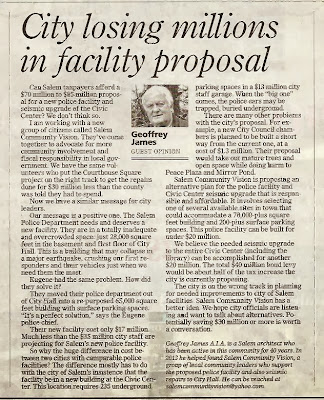 Instead of asking "what do we need?" and "what is good for Salem?" the question by critics has been "how cheaply can we do this?" And Eugene seems to provide the answer.


Eugene had the same problem. How did they solve it?

They moved their police department out of City Hall into a re-purposed 65,000 square feet building with surface parking spaces. “It’s a perfect solution,” says the Eugene police chief.

But is it actually "perfect" and is Eugene's hollowed-out downtown really the answer?


The Eugene Police Chief is very pleased with his $17 million new 65,000 sq.ft. building and his 210 secure parking spaces. He says on YouTube it "is a perfect solution". Look it up. He said "ideally they would be downtown" but that would be "twice the cost to achieve".

I see a qualification pretty clearly:  Ideally, the police station would be downtown.

It's not in fact perfect.

There hasn't been an adequate analysis of the trade-offs in Eugene or in Salem. It's not clear the Eugene solution is so great in any way other than short-term costing.

(And we have to remember that Eugene still needs a new City Hall, so the total bill for the project is going to be a whole lot bigger than $17 million.)

A large part of the argument against a Civic Center site has been "Save Peace Plaza!" and "Save Mirror Pond!"  But all you have to do is look at where protesters, petition-gatherers, Girl Scout Cookie sellers, and anyone exercising their First Amendment rights set up.

A public plaza would be a great place, right?  But no.  No one sets up in Peace Plaza or Mirror Pond because they are lousy public spaces and no one uses them. They're ornamental emptinesses.

Peace Plaza and Mirror Pond look pretty, but they are broken, and a Civic Center project could be an opportunity to fix them. (For more on this see here and here.)

And fixing them doesn't just mean fixing the internal hardware and furniture.  It's not like a different configuration of benches and art and lunchtime foodcarts is going to transform the square.

Consistently in Salem we have focused on the atomic unit of the lot and what goes inside the lot.  Our land-use questions and analysis are bounded by the property line. We prefer the close-up.

But medium and long views and pattern are important, too. Edges and relationships with other nearby properties are also important, maybe more important.  Riverfront Park is great, but it's bounded by a railroad and state highway, and along that state highway there are no inviting storefronts or other foot-traffic attractors.

Ironically, even as nice as Waterplace is, the sidecar building Orupa occupies uses a back entry off the parking lot, and lacks a direct connection to the sidewalk on Liberty. The streetscape, the edges, and sidewalk conditions on Liberty are too car-centric.

The Police Station and Civic Center project give us an opportunity to talk about the ways the Civic Center is dead space, a withered node in the urban fabric that should be, but is not, central in the life of the city.

The move to press forward with a $20 million bond for a Eugene-style Police Station is premature, and there needs to be more conversation, debate, and analysis before moving forward.

Instead of settling on a dollar figure first, we should have a better idea of "what does Salem need" and then start asking how much does it cost.  Leading with the dollar sign puts the cart before the horse.

Council meets Wednesday the 21st at 5:30pm in the Anderson Rooms at the Salem Public Library, 585 Liberty Street SE. No public testimony is being taken, but SCV is coordinating a presence and you can read more about their position here and a longer FAQ here.

(For all notes on the Police Station and Civic Center project, see here.)
Posted by Salem Breakfast on Bikes at 7:00 AM

Thanks for calling attention to the work session tomorrow night. I hope folks concerned about this turn out. I agree completely that "there needs to be more conversation, debate, and analysis before moving forward." Salem Community Vision has tried to foster this by holding two community forums on this issue at the Grand Theater. The City, amazingly, has not chosen to hold a single public hearing in the three or four years they have been working on this. They continue this practice tomorrow night of excluding public participation. It's time for the City to appoint a broad-based task force of people with knowledge and diverse viewpoints on this issue to come together and seek common ground on the best plan to meet our needs for a new police facility and improvements to the Civic Center.

I would hope that a location would be found that would be accessible to those who frequent the police station and municipal court. We need to be honest here, though. Having those services downtown, does not make them any less car dependent. In fact, it is the cost of housing the many police vehicles at the current location, that screams for an alternative. Even with a multi-million dollar parking structure, the officers will still have to park their personal vehicles in the neighborhoods, as they do now. Police stations and courts are not like libraries. Most of us go out of our way to avoid long term involvement with cops and judges. The location should have good transit service, but it will have to have plenty of parking for law enforcement vehicles, employee parking, and parking for visitors, and we shouldn't have to spend millions on a multi-level structure. I'm sure you would agree that it would make no sense to move Parks, and Public Works downtown, with their street cleaners, dump trucks and snow plows. Although, I'd love to see Parks planning and administrative staff move downtown. Where they are now is really sad.

The main thing that Salem Community Vision has done is to point out to the public that there are many unanswered questions about the proposal for a downtown police station. Unlike the City manager and mayor we have tried to put the issue before the people and give everyone an opportunity to speak up and ask their own questions. We did this with two community meetings.

Thank you for saying that you think this effort has been successful.

SCV did not want to select the new location or even point out a building to renovate. We sought to illustrate that there are alternatives worthy of consideration. We pointed out by illustration that cost might be lower by using another less difficult to develop location than the Civic Center. Eugene was a handy way to show what another community has done. Our point is that if another city of similar size can do something at a lower cost, we should consider looking at alternatives.

SCV is advocating above all else, more citizen engagement up front in the process, more openness by the government and fiscal responsibility.

SCV will continue to work for these 3 goals in this matter as well as other matters as they come along.

We are looking at many other issues to try and encourage a community dialog, just as other organizations like Breakfast on Bikes are attempting to do.

We hope that you and your readers will attend the work session Wednesday and that everyone will continue to work for openness, participation and fiscal responsibility as we work together for a better Salem!

Well. As LoveSalem suggested back in February, moving the Police to the Library and relocating the Library seems to be in play now.

See SCV and Hinessight for more on the work session and Library proposal.