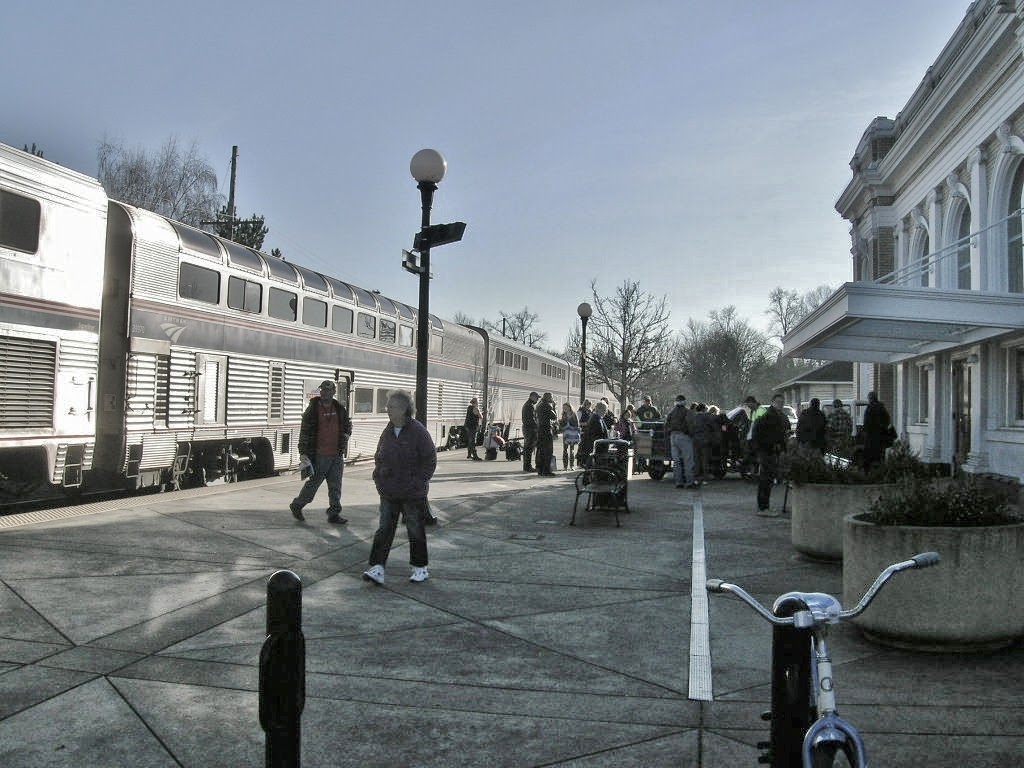 
SALEM — “Trains Matter” is the theme for the 7th Annual National Train Day celebration this Saturday, May 10, at railroad stations around the country, including Portland, Salem, Albany, Eugene and Klamath Falls. The Oregon Department of Transportation is joining Amtrak and other organizations to present information, host activities, and celebrate why trains matter.

Portland’s event, which runs from 10 a.m. – 4 p.m. at Union Station (800 NW Sixth Avenue Portland, OR 97209), features over thirty rail-related booths including Talgo, Operation Lifesaver, Association of Oregon Rail and Transit Advocates and others. Attendees will enjoy live music, food vendors and displays. Tour an Amtrak Cascades’ trainset, as well as train equipment from the 1930’s and 1940’s, including a Union Pacific caboose. Little train fans can enjoy Chuggington Kids Depot, face-painting and entertainment from the Rose Festival Character Clown Corps, plus more for the entire family.

In Salem, train fans will gather from 1 p.m. – 5 p.m. at the Salem Amtrak Depot (500 13th St SE, Salem, OR 97301), where there will be a vintage Speeder and a Grand Island Railroad mini-locomotive on display, along with informational booths featuring Operation Lifesaver and Leisure Hobbies, model train displays, Twisty the Clown, refreshments and other fun family activities.

ODOT also sent out a note about the State Rail Plan:

SALEM – The Oregon Transportation Commission at its last meeting released the draft 2014 Oregon State Rail Plan, or SRP, for public review and comment. The purpose of the SRP is to help guide decisions about Oregon’s investments in the rail system. An 18-member steering committee helped assemble the goals, policies and strategic actions in the draft plan; now the public is invited to review the plan and provide input, which will be accepted until June 20.

The Oregon Transportation Commission will also hold a public hearing to gather input on the plan at its meeting on May 16 in Astoria. The meeting will be at the Holiday Inn Express, 204 W. Marine Drive beginning at 10 a.m.

The SRP recognizes that rail is a crucial component of Oregon’s multimodal transportation system even though it is predominantly owned by private companies. Public-private partnerships are essential to assure that Oregon’s residents and businesses continue to reap the benefits rail services provide.

The steering committee considered a wide variety of factors in drafting the plan, including passenger and freight rail system needs, alternative funding scenarios and a potential framework for evaluating investment options. In-depth analyses and other information used in creating the draft plan is available on the project website.

Note the difference between privately owned railroads and publicly owned carroads, one framework developed in the 19th century, the other in the 20th. Warren Buffett owns Burlington Northern, but no equivalent on the Interstates!
Posted by Salem Breakfast on Bikes at 10:00 AM

I'll be traveling across country on Amtrak in a few days to visit my son in Boston. The Portland to Chicago segment travels on Warren Buffet's Fossil Fuel Express with oil trains from North Dakota, coal trains from Wyoming and now in Wisconsin they are mining sand for fracking. I've seen a long train filled with frac sand in a rail yard; and sand being loaded at a railroad siding in Sparta, WI just past a sign that read "Bicycling Capital of America" Aldo Leopold would weep.

Last December when I returned from spending Thanksgiving in Boston the Amtrak Empire Builder was 16 hours late getting into Portland and Amtrak canceled several trains on that route over the following few days to get its schedule back on track. Amtrak blamed the problem on weather and increased traffic from the North Dakota oil fields. Now the train east leaves Portland 3 hours earlier than it used to. Half the people on the train between Portland and Minneapolis are going to or coming from jobs in the oil fields or construction or service jobs related to the oil boom.

But it's a beautiful trip - along the Columbia River Gorge, through Glacier National Park, the prairie, down and then across the Mississippi River, skirting the Great Lakes, passing by the old mill towns along the Erie Canal. One of my guilty pleasures is going through the gritty industrial backsides of cities, fascinated with how things get done, trying to get my head around the question of how do produce what we need and have adequate livelihoods without destroying our own habitat? The train goes right next to the steel mills in Gary, Indiana which are mind blowing and still in operation but with only a fraction of the former labor force. I've taken this trip several times, coming here to visit my daughter before I retired and moved to Salem and now going back east to see my son.

If I had gone to Boston a little earlier this month, today I'd be going on the 6th Annual National Train Day Bike Ride. Dick Bauer, a bicyclist and history buff takes a group out from Boston on the commuter rail and then they bike back tracing old rail lines and stopping at old depots, some abandoned, some repurposed. It's really amazing how much passenger rail there used to be and how many railroad companies. Something I learned on a train day ride: the reason so many stations are called Union Station (Portland, Washington DC, Chicago, Los Angeles, others?) is because at some point competing rail companies realized the value of being able to offer customers a way to connect between them - ergo union stations.

The commuter rail in eastern Massachusetts has a few cars fitted out with bike racks the length of the car on one side. They use them in the summer on routes to the beach towns outside the city. On National Train Day, they put one of the cars on the route Dick uses for his history tour.
National Train Day Ride