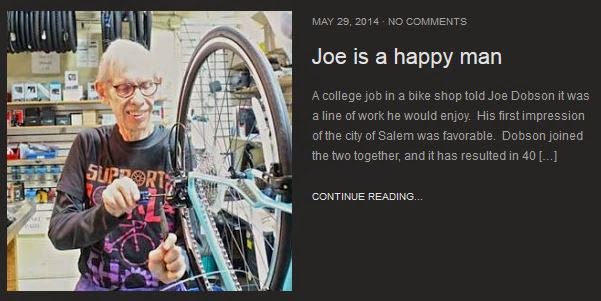 Nice to see the piece on Joe Dobson, owner of Bike Peddler, in the new Salem Weekly!

You might recall some preliminary talk about relocating the Capitol and Legislature for the duration of a seismic retrofit.

At that time there was serious speculation the Legislature would choose to build a new administrative building on the Yellow Lot, which would be the temporary home for the Legislature during the renovations, and then revert to a State agency afterwards.

But now it looks like the Public Utility Commission building is the leading candidate. While the old building in the triangle* between 12th, Marion, and the curve of Union Street, is being renovated, the PUC moved out to the Fairview Industrial Park, and it seems that move could be prolonged.


The Oregon Legislature will most likely relocate to the nearby Public Utility Commission building for three and a half years when the Capitol undergoes a renovation, legislative leaders said Thursday.

The Oregon State Fair & Expo Center about a mile and a half north of the Capitol will serve as a backup option, said Senate President Peter Courtney, D-Salem.

Other options include converting the Kettle warehouse more than a mile south of the Capitol, and a phased, partial relocation between the Capitol and the PUC building.

The story was going to be about a reduction in parking on the mall and the need to shift some drive-alone trips to other modes, but now the story's emphasis might instead be the increased value of surface parking a little north and east of the Capitol.

It's possible that the Oregon School Board Association will find more income on the new parking stalls created by the demolition of this house just a couple of blocks away from the PUC site.

* There's an old rail time point here that goes by Lemrock. GPS coordinates suggest it is on Marion Street, just east west of 12th, but a more likely location is the intersection of 12th and Union at what was the rail wye. But we can still say Lemrock is the Capital of Oregon!

Just in, on Tuesday, June 17th the Planning Commission will hold a "class 3 design review" and "class 3 site plan review" for the first part of the North Block of the Boise Redevelopment Project.

The corner building has apparently jumped the queue, and is now in front of the nursing home.

I don't know there's a whole lot to say about this. I don't think it will exactly transform the corner, but I do think it will add some additional sidewalk activity for the better. (See here for a bit more.)

Most important will be making sure that the walkway and path system in "phase three" is in fact executed promptly.  If I have a complaint, it is that this is not phase two and this "north block" building phase three.

(For all notes about the Boise project, see here.)
Posted by Salem Breakfast on Bikes at 7:00 AM

If my memory serves from previous posts, there is essentially no way to walk to this new building on the Boise site from downtown. Is that correct. In other words, is there a crosswalk at this corner?

Not so much "no way to walk" as much as "not as easy as it should be."

There are three crosswalks at this intersection: both n-s running x-walks along Commercial; and the northerly e-w running x-walk, the one between the Conference Center and Magoo's. Only one of these serves the corner of this new building.

The e-w x-walk between the Fire Station and the Boise site at this corner is closed because of dual turn lanes from Front onto Commercial.

I have thought that when the Boise site is built out, this might be an excellent candidate for a button-activated "scramble signal phase" that would stop auto traffic in all directions and let people on foot and on bike go through the intersection in any direction they like. That would then make the Riverfront-Conference Center connection finally solid.