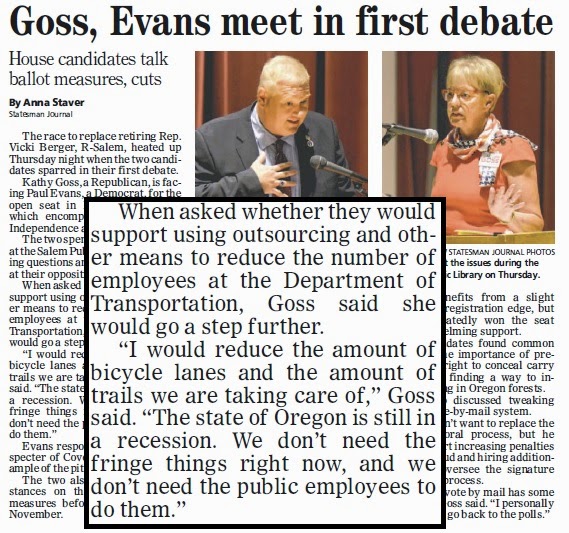 Several readers pointed this out yesterday, and it is relevant to note!

It doesn't seem like the debate question was directly on bikes, so apparently unsolicited Goss brought bikes up herself:


I would reduce the amount of bicycle lanes and the amount of trails we are taking care of...The state of Oregon is still in a recession. We don’t need the fringe things right now...

For a long time Goss was on the Statesman's editorial board, on Go Downtown Salem's board, and her husband was on the Planning Commission. In 2009 together they were honored as Salem's "First Citizens." (The citation on p. 12 of the Chamber newsletter has more on that.)

You can read more about Goss at her campaign site.

(Since there's no substantive policy matter here - over at the online version of the piece, OPBAC member Wayne Baum ably commented on the "fringe" portion - and this blog is not meant as the place to talk about why one is a better candidate than the other, comments are turned off.)
Posted by Salem Breakfast on Bikes at 7:30 AM