Sunday Streets: More on Portland, Eugene, and Consumption than Creativity and Mobility in Salem

Salem Sunday Streets is this weekend, and while it looks like it will be a lot of fun, it also occasions some deeply mixed feelings here. 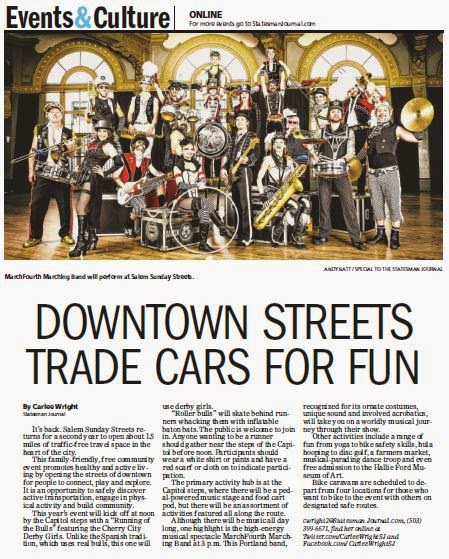 If you want to know why, a good place to start might be the paper's weekend preview. The headline says "Downtown Streets Trade Cars for Fun," but the image is an interior one, probably the Crystal Ballroom in Portland.

It's nothing about streets or cars or Salem.

On the cover of the same weekend section, the main attraction is the wonderful spectacle of MarchFourth from Portland. 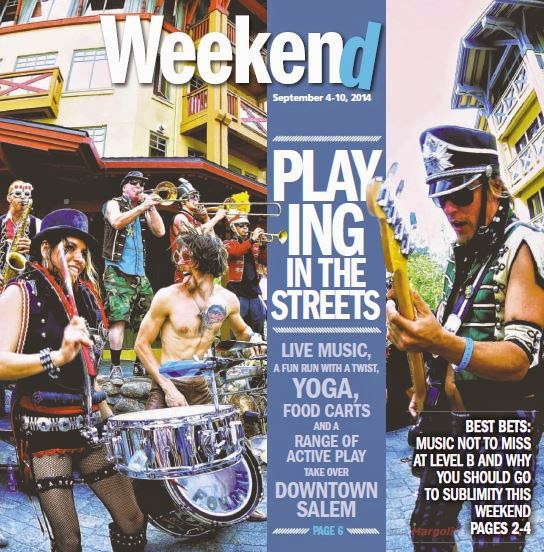 But those aren't Salem scenes.

There's a lot of importing going on here.

A lot of the focus this year is about consuming entertainment a little passively - about a stand-and-watch, about street fair activities, about imports from out-of-town - and less about experiencing the city of Salem while walking and biking around it in a mobile and more active engagement.

For a good bit of the summer two images have been on Salem's Facebook header.

The image on the left has been picked up and used in one of the promo posters for the bike trains.

A couple of days ago it joined the Salem Neighborhood Services page.

A lot of the people using the image, even City Staff, may be newcomers to Salem and may not recognize that it is not from Salem. 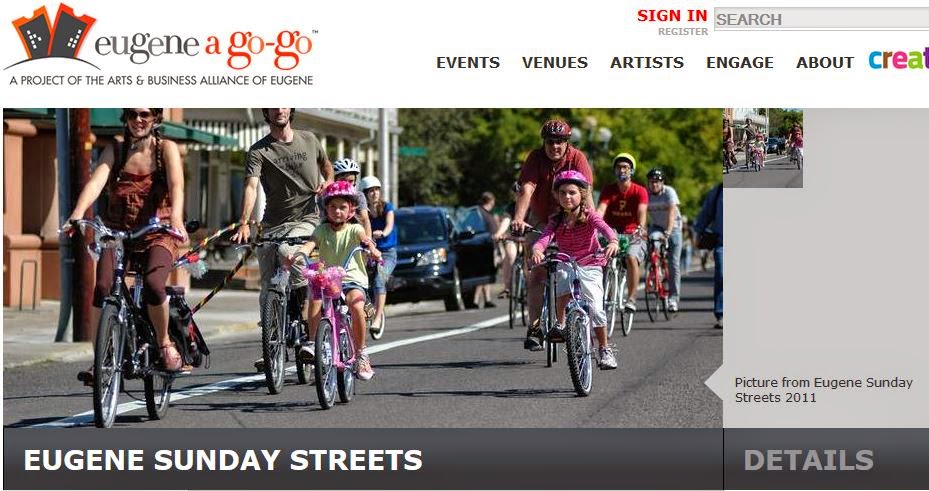 It is an image from Eugene's 2011 Sunday Streets. That's 5th and Willamette right by the Oregon Electric Station.

It's kinda like stock photography, and the key message in the image is "yay family biking!" In this regard it may not be so important to have an image from Salem.

But it also seems like a sign that City Staff, volunteers, and others either aren't walking around Salem or don't think it's important to walk around Salem. Either they don't know that it's not from Salem or they don't care. More deeply, it's a sign there's a lack of a building-by-building, street-by-street body of local knowledge.

It could be, for example, that some of our problems with the way street trees are handled are because staff aren't out walking by these same trees and seeing their seasonal variation, seeing the way the trees actually work in relation to people, the sidewalk, and the building.

It is definitely the case that city engineers don't walk and bike often enough - if at all - along the roads and through the intersections they are ostensibly "improving."

When our knowledge of Salem comes from driving, we aren't able as easily to see when things "aren't quite right." (I would say that a huge part of our problem with downtown health is that we insist on seeing and "knowing" everything from the perspective of driving and parking.)

Without putting too much stress on the idea that Salem Sunday Streets is using the "wrong" imagery, I think the fact that the image from Eugene is being used in multiple places without comment is telling. Just as the focus on Portland's MarchFourth is telling.

The bike corral at the fountain illustrates this. There's not going to be much room to bike around the route, so folks on bike should probably expect to park in the corral and walk around. The event is an end-point and destination rather than something that unfolds in space. 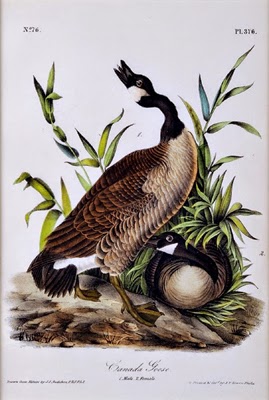 In the end, the event will be great fun. It will have a magnificence. But the magnificence will be a little like strange necks and awkward poses of the birds of John James Audubon at Hallie Ford.

For many years I wondered why the birds didn't look "quite right." Finally I learned most of the birds were dead when he posed them.
Posted by Salem Breakfast on Bikes at 7:00 AM

I presented the first draft of a SSS route to the events committee. It was about 7 miles long and connected numerous neighborhoods and downtown. Staff from public works forcefully opposed it. Cliff Bash from public works even said "why can't you just use the sidewalk?" Along with a heavy dose of fear mongering about the traffic and parking issues it would create (in Salem on, Sunday) It was very clear that they just don't get it. They probably never will. Salem just seems to attract people with antiquated views toward transportation and they have big personalities that overwhelm anyone who suggests that the city they have engineered isn't working.

Someone else presented an proposal for a parade before we presented and Cliff Bash told them they could use the same route around the capitol that SSS is using this year. The "marble ghetto" seems to be the default pen they just file people into.

It was also obvious last year that zero effort was put into training staff or volunteers on even basic tasks like controlling intersections.

It's an interesting take on the marketing. I was part of the first SSS and created the watercolor illustration to promote it the first time around (which included bikes, scooters, walkers and strollers). I also took the second image on the right of the header that features a family (one from our community that I adore) from the SSS in 2013. I never was paid and worked hard to promote something that had never happened in Salem before. The image from Eugene is actually a Salem family (transplant from Eugene) and I suspect the city used it since they didn't have more photos from the event in 2013. My suggestion is, if you want to see more local photos of salem and bikers, share them with the city. Corrine would have happily used those in the marketing of the event.

Jessica, there are at least five B on B photos posted (though without photo credit or backlink, both of which alas are more difficult than they should be on FB) I'm happy to report! The most recent one I think is the bookmobile image here.

(As for the image on the right you point to, it's my favorite from the whole event, and in this post is an image of bikes in front of the bank from 1891. That continuity over more than a century is wonderful to me. Last year I told the family it was the favorite, but I did not know who took it. I thank you now. I love that picture.)

It is important to note, and perhaps this wasn't clear, that the central point is much less about volunteers who have to make do with limited resources and more about the City's overall commitment. The City has put the event in a place where it has to rely on DIY spirit, and as wonderful as that is, the ciclovia movement is not a DIY event, even if it draws on some or a lot of DIY energy. The ciclovia movement is about municipalities making a clear value statement about active transportation. Street closures require City action and City support. As Curt's comment indicates, the City of Salem is not there yet.

I don't mean to criticize volunteers who do the best they can.

I do mean to criticize the City for not embracing a more extensive course of street closures, for putting too much of it in the lap of volunteers, for not helping the volunteers more, and for giving Corinne too little in the way of formal resources for support. I hope that's a meaningful distinction.

In the face of such a small route, it's not surprising the event was more of a street fair, but what I long for is a real ciclovia.