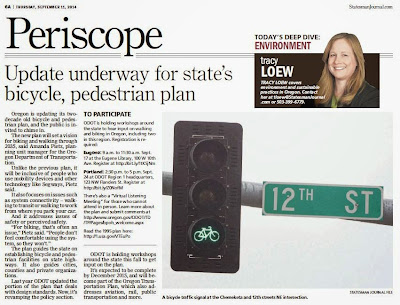 Yeah, yeah. ODOT's updating the Statewide Bike Plan. The process hasn't seemed all that relevant to Salem, so I haven't been following very closely.

But I'm not sure ODOT thinks Salem's that important, either!

Here's BikePortland's earlier note about the "listening meetings" and many of the commenters are skeptical about the thing.

And the even earlier post on the breakfast blog about the kick-off, including a couple of observations about the initial stakeholder interviews.

Since there's not a physical meeting for Salemites, there is a seemingly web 1.0 "virtual meeting" you can click through and use to comment.

I just question how much this is geared towards a genuinely multi-modal approach to transportation or if it's mainly oriented towards something like "while maintaining a car-first priority, can we improve our bike facilities without inconveniencing car travel."

Is it incremental, or is it transformational? I am thinking it's the former, that it will not touch structural problems of autoism, and instead will focus on more modern bike lane design.

And if it's incremental, I would rather see existing policies - even ones from 1995! - implemented assertively and comprehensively than have aspirational policies implemented occasionally, barely, or weakly.

Have you checked it out? Maybe you will know more about it and have a different opinion.

The Salem River Crossing Oversight Team meets next week on Thursday the 18th, and one of the topics will be a brief update on "design refinements for bicycle, pedestrian, and transit facilities."


This will just be a status update. We have been on hold with this effort while we waited for the model to be updated. This work was just completed in August, so we will be ramping up on design refinement work in the next couple of months...[and] anticipate that we will share this with the OT at their meeting December 11.

There may not be much substantive here at the meeting. But the project displays what I expect will be the great defect in the prospect of a new statewide bike plan.

A strong, truly multi-modal plan would look at how we can improve mobility at less cost, both in dollars and in social/environmental cost, than a giant bridge and highway.

Instead, the plan will focus on how we can build "better" bike lanes on a bridge that multiplies barriers in the adjacent neighborhoods. The net will be a great loss, not a gain.

There is not a systems approach to mobility for all road users. It's still fiddling on the shoulders while we remain committed to pumping car through-put and degrading connectivity for people not in cars.

(Next week there might be more to say, and certainly N3B will have additional comment.)
Posted by Salem Breakfast on Bikes at 12:01 PM

A reader shares a comment about "rails to trails" analysis missing from the process and plan:

"The current bike-ped plan does not include an analysis of the hundreds of miles of short-line railroads that have been or are likely to soon be abandoned."