Our Safety Talk is Still Confused: Cars and Driving are Dangerous. Full Stop. 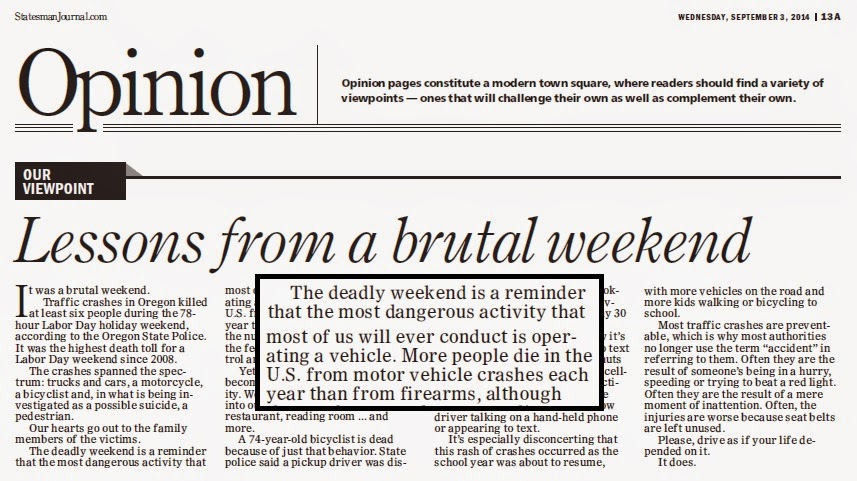 The paper's editorial today highlights the traffic fatalities from over the holiday weekend.


It was a brutal weekend.

Traffic crashes in Oregon killed at least six people during the 78-hour Labor Day holiday weekend, according to the Oregon State Police. It was the highest death toll for a Labor Day weekend since 2008.

And it goes further, echoing a point made before:


[T]he most dangerous activity that most of us will ever conduct is operating a vehicle. More people die in the U.S. from motor vehicle crashes each year than from firearms, although the numbers are close, according to the federal Centers for Disease Control and Prevention.

Yet many of us seemingly have become blase about our responsibility. We have turned our driver's seat into our mobile office, styling salon, restaurant, reading room ... and more.

Unfortunately, the main strategy in risk-reduction becomes "just do it better and more carefully" rather than "you should try to avoid and reduce your amount of driving."

If something is dangerous, we should do less of it, right?

Not according to the prevailing authorities. 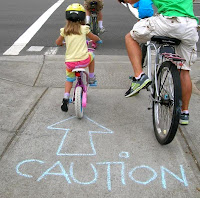 Last month ODOT sent out a press release about back-to-school safety, and mostly it's pretty good, but it focuses on "just try harder" not on "do it less."

SALEM – With several recent bicycle-car crashes – and back-to-school just around the corner – ODOT and its partners are encouraging vigilance in sharing the road and watching out for one another. A transit campaign appearing soon on buses around the state says, “School is in. Keep an eye out.” Print and television public service announcements urge simple steps as a way of ensuring safety, such as making eye contact, avoiding distractions and wearing reflective gear.

“It’s really a matter of each person taking responsibility for his or her safety,” said Troy E. Costales, ODOT’s Transportation Safety Division administrator. “You may think a driver sees you – or as a driver, you may think you’re aware of all that is going on – but not seeing each other is often mentioned as one of the reasons for these crashes.”

Safety advocates remind all users of the transportation system that even a small mistake can have big consequences, and nothing is more important than getting to your destination safe and sound. A new online publication called “The Driver’s Field Guide to Sharing Oregon’s Roads” is available this week, and it will complement a publication that appeared earlier this summer, “The Bicyclist’s Survival Guide.” Both are available on Transportation Safety’s website under “Bicyclist Safety.” Other educational materials are available to improve pedestrian safety.

Here are some reminders that can help reduce crashes, injuries and even death:

For drivers
For pedestrians
For bicyclists


Significantly, one of the sentiments is "even a small mistake can have big consequences, and nothing is more important than getting to your destination safe and sound." The subject of making a "small mistake" is not always the same subject - the same "you" - as the subject "getting to your destination safe and sound"! Making a small mistake usually means harming someone on foot or on bike not in your car. Alternately, a child could be making the "small mistake," but they're not the one reading the ODOT release and being directly addressed.

The dangerousness of cars to others is effaced here, and blame shifted to more nebulous agents than a driver. This is shifty rhetoric. It's just interesting, though not surprising for the highway agency, how ODOT avoids saying, "Cars are dangerous and kill as many people as guns." Instead was shift responsibility to the more vulnerable person on foot or on bike, "It’s really a matter of each person taking responsibility for his or her safety."

Anyway, mostly the recommendations are good, but there are a few of them for people on foot and on bike that could be parallel recommendations for people in cars - or show the default preferential autoism.
It's especially vexing how some argue we should turn an ordinary activity like walking into a traffic cone-apparel safety dance. Like cars are hunting the urban deer, and fellow humans need to wear safety orange so they don't get hit. That's not a message we should accept.

It's great to see the paper state unambiguously that "driving is dangerous," and it would be greater to see the next step: Encourage people to walk and bike and bus more, and to argue for human-capacity increases in infrastructure that don't mean building more roads and inducing more driving.
Posted by Salem Breakfast on Bikes at 8:30 AM