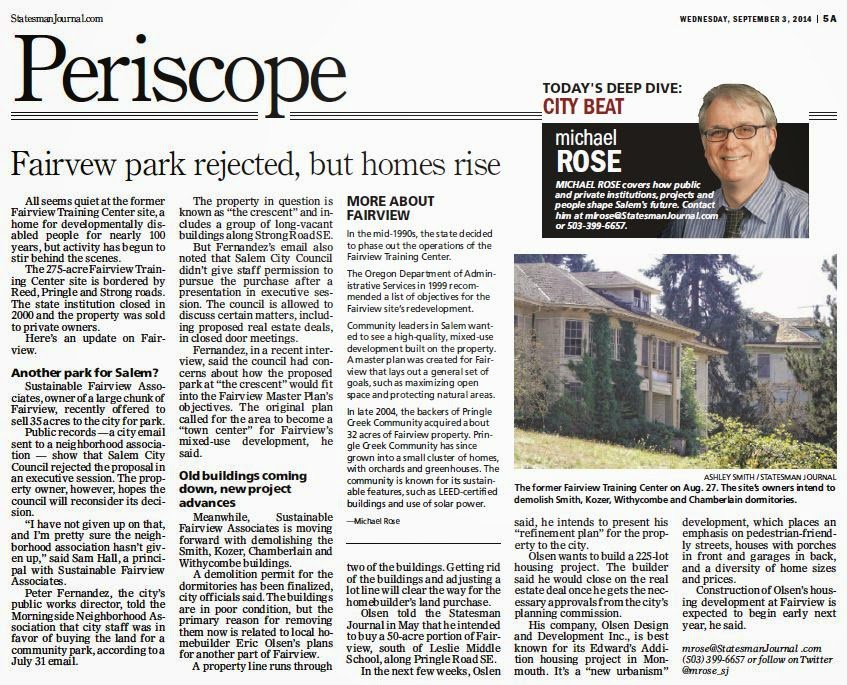 The Fairview update in the paper today has a couple interesting details new here.


Sustainable Fairview Associates, owner of a large chunk of Fairview, recently offered to sell 35 acres to the city for park.

[But] Salem City Council rejected the proposal in an executive session....

Peter Fernandez, the city's public works director, told the Morningside Neighborhood Association that city staff was in favor of buying the land for a community park, according to a July 31 email.

The property in question is known as "the crescent" and includes a group of long-vacant buildings along Strong Road SE....

Fernandez, in a recent interview, said the council had concerns about how the proposed park at "the crescent" would fit into the Fairview Master Plan's objectives. The original plan called for the area to become a "town center" for Fairview's mixed-use development, he said.

This is a detail from the conceptual vision fully built out: 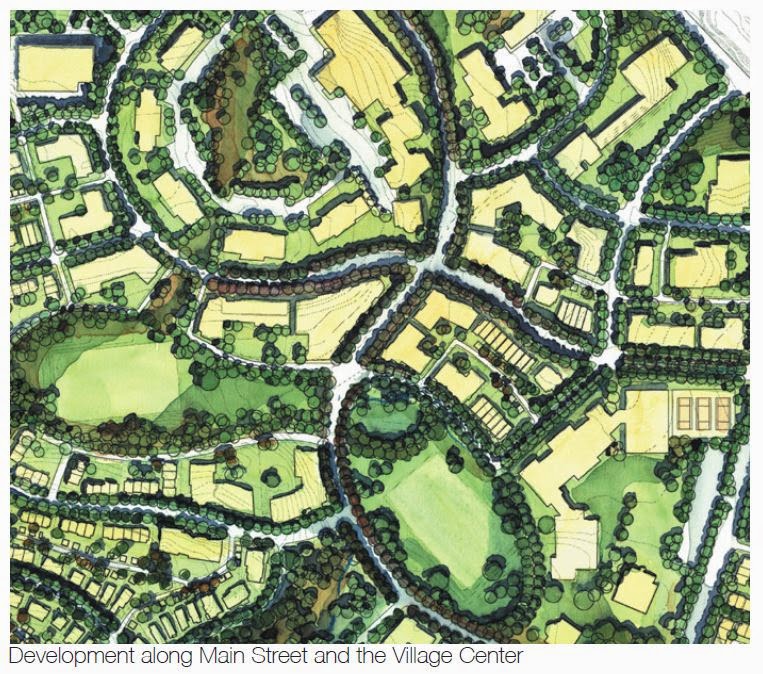 You can see the "crescent" at top and just below the central, curving cross-roads is the commercial center, the "village center," and two roughly elliptical park areas.

These park areas are adjacent to, but not identical with, the crescent.

In the recently completed Morningside 360 neighborhood plan, the proposed park area is farther up on the hill, and the "crescent" and "village center" look to be untouched. 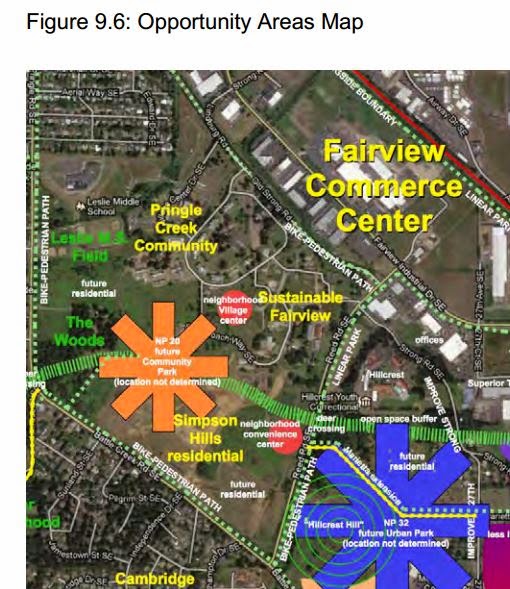 So public and adopted documents do not show intent for a park in the crescent. (Though it is also true that these documents show "the woods" where the Eric Olsen subdivision is going. Perhaps this has required shifting the park's desired location.)

The development needs a higher-density commercial center, and I worry that the project is on its way to becoming just another low-density, car-dependent suburb, with lovely doilies of ornamental emptiness.

From here in the context of the limited information available, Council is right to have questions about the park being consistent with the "town center."

It will be interesting to learn more about these park conversations. Maybe this is a good idea, but maybe not, and hopefully both Staff and Council will share more of their analysis.

Here's the Eric Olsen development, and while the picture is not very precise, it does actually show more about why the old dormitories in the crescent might need to be demolished:


The buildings are in poor condition, but the primary reason for removing them now is related to local homebuilder Eric Olsen's plans for another part of Fairview.

You can totally see the edge of the composited image slicing through two of the buildings on the crescent. I didn't think anything of this at the time, ascribing it to the clumsiness of the overlay, but it seems now that it is actually a meaningful detail. I thought the red line was the property line, but it seems now that this just delimits the housing parts.

And if the Olsen development truly needs the property line there, the development is of a quality and nature that it meets the demotion criteria that the proposed new thing be a great improvement on the thing to be demolished.

This also will be interesting to watch - but in a good way, I think!
Posted by Salem Breakfast on Bikes at 1:00 PM