Did you see the historic picture of the Center Street bridge collapse in the paper yesterday? 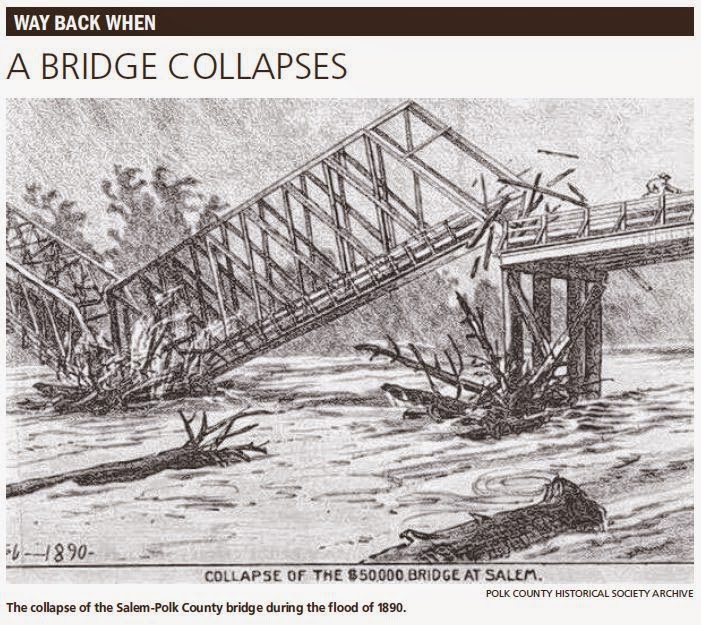 On February 3rd, 1890, the first Center Street Bridge washed out and collapsed in the big flood.

In The paper on February 5th they asked "What shall we do?"

We know this. It's totally expected. Its exact timing will be a surprise, but not that it happens at all.

And it's going to collapse our bridges just like the flood of 1890 collapsed that bridge.

At the Salem Rivercrossing Oversight Team meeting yesterday, the team selected a bridge type for the final Environmental Impact Statement. The Segmental Precast Concrete Box Girder style is basically second cheapest option of those originally considered - though the Team already threw out the high and low, so this was the lowest price point of the remaining choices.

But remember that a bare-bones seismic retrofit of the two existing bridges is about a third of the cost, so cheap it doesn't fit on the chart!

And the new bridge requires a whole bunch of work, another few hundred millions, at the bridgeheads and with the OR-22 connector. At least a half billion.

And even if we build a new bridge, the Center and Marion Street bridges will still collapse in the earthquake we know is going to happen.

If we build a new bridge, our main downtown bridges are still going to look like the bridge in 1890.

It doesn't add up.
Posted by Salem Breakfast on Bikes at 7:00 AM

At the Oversight Team meeting yesterday, a co-leader of NO 3rd Bridge asked the ODOT representative on the OT why ODOT has made retrofitting the Marion and Center Street bridges a "Tier 3" priority (that's 3 out of 3). Sonny Chickering said he did not have the answer but that we could get it and get back to NO 3rd Bridge and the OT. We are looking forward to his answer.

How do you think the dams on the Santiam will hold up in a major earthquake? If Bib Cliff goes down, what happens to Salem/Keizer?

At the August Mid-Willamette Area Commission of Transportation (MWACT) meeting, the state bridge engineer gave a presentation of seismic vulnerability of Oregon's bridges and ODOT's Mitigation Plan. The presentation concerned the entire state and the Tier 1, 2, and 3 proposal. Minutes of the meeting can be found at ODOT's MWACT page in the October agenda packet here

The state bridge engineer said it would cost several hundreds of thousands of dollars to assess the vulnerabilities and needed fixes for Salem's Willamette River bridges. He explained that if a project of this size was programmed , ODOT would likely need and want to work on the structural fixes as well as retrofitting for earthquakes. He gave a rough estimate of $22 million retrofit and $45 million structural repair for Marion St. Bridge ($67 million total); $14 million retrofit and $50 million for Center St. Bridge ($64 million total). These are planning level estimates only.

It should also be noted that in the agenda packet to which Mike links, there's great testimony from No Third Bridge forces.

It's also relevant that we will have spent upwards on $10 million on the Third Bridge process - when we could have spent much less than 10% of this on the seismic assessment you note "could cost several hundreds of thousands of dollars." Context is important here. Around $7 million of this is actually spent. You could pull the plug on the bridge process right now and have plenty of money left for the seismic assessment of the existing bridges!

Any word on the info Jim notes Sonny Chickering was going to get on why we are in the last tier?

(You might have missed the earlier discussion of this particular MWACT meeting!)

All notes about the big earthquake can be seen here.