This is one of my favorite house details in all of Salem. It's small, but just adds a perfect dash of seasoning to a modest late 19th century gable-front cottage. Maybe the window's not even original, but I'd like to think it was.

Thursday, September 4th the Grant Neighborhood Association meets and they'll get an update on the Neighborhood Heritage project.

In the meantime, he's now publishing a similar project in The Oregonian. Look for several posts over the next few weeks and into fall in the Portland series.

The Neighborhood Association meeting is on 4th at 6:15 p.m. in the Library of Grant Community School, 725 Market St NE.

While you're out and about, make sure you look at the reliefs by Frederic Littman on the Belluschi bank downtown. They celebrate trade, industry, and labor. And if the building is going to be demolished, who knows what will happen to them.

A lot of the WPA-era photography at the Library of Congress takes note of working men and women. A couple years back a good chunk of it taken by Dorothea Lange was at the State Library. Yale has just put together a neat interface for thousands of images, accessed by clicking on a county-by-county map.

Blessing of the Bikes 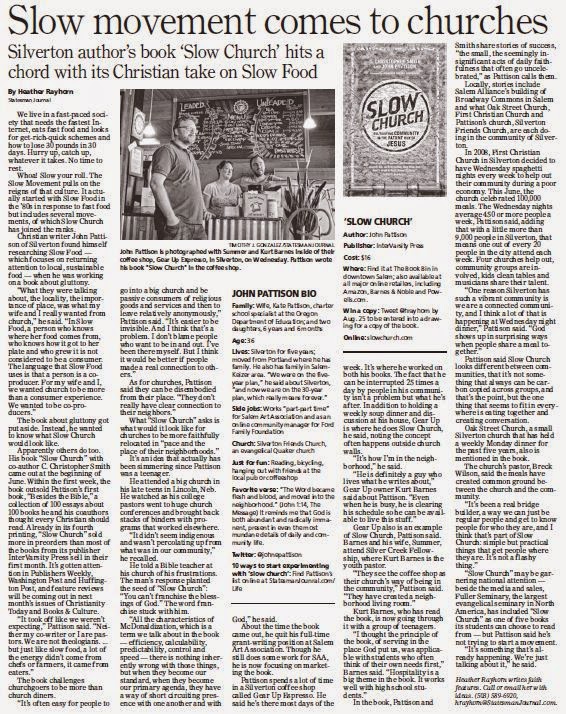 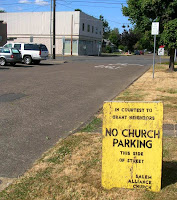 Though the piece is mostly about activity in Silverton, it also cited Salem Alliance Church's Broadway Commons as a relevant local example.

As readers will know, we're huge fans of the building and site. If Salem just executed a bunch of cookie-cutter duplicates of that building in place of suburban cookie-cutter buildings with parking in front, it would be a huge boost to walkable urbanism and walkable neighborhoods!

But in a marketplace - and it is not a novel claim there is a consumer market for churches and religion in the US - no longer tied to the notion of a parish or neighborhood church, Salem Alliance still struggles with parking demand, lot size, and over-flow on neighborhood streets. 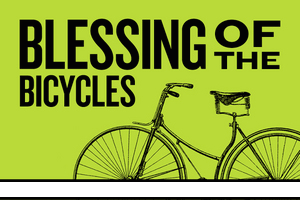 Last month, St. Timothy's Episcopal Church made a gesture towards something that's even more authentically "slow."

They celebrated a "Blessing of the Bicycles"!

While it wouldn't do to try to extract some kind of mystical meaning or grand self-justification out of it, it's worth remembering that one of the pleasures of walking and biking is that your own labor, derived from food, provides the work. You, not petroleum products, drive the engine. DIY, indeed.

No matter what your religious sensibilities, that's worth celebrating.
Posted by Salem Breakfast on Bikes at 7:00 AM

Looks like the Belluschi will be demolished, so check it out while you can.