The Narrative of Autoist Triumphalism and a Family History

We all have our hobby horses! And one of the main hobby horses here is highlighting and correcting the story of autoist triumphalism. 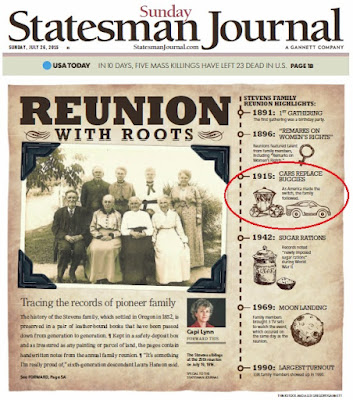 For over a century, the Stevens family has taken notes at reunions!


Each entry offers a window into what American life was like at the time. The minutes for the 24th reunion in 1915 note how "almost everyone present came in automobiles instead of wagons, buggies, etc."

Having cars is by itself is a largely neutral fact, something true or false.

But it also has picked up a narrative: "As America made the switch, the family followed."

Personal narratives make for compelling stories, but they aren't always representative or the best embodiment of larger patterns of social change.

Families getting cars in 1915 were not following.

Instead, they were still out in front.

Cars weren't cheap, either, so having them in the mid-teens was a sign of prosperity and status. American life still had plenty of people traveling without cars.

It wasn't until after World War I and we were into the 1920s that here in Oregon auto ownership was truly widespread, and even then still far from a majority.

Now, maybe you say, "you're just quibbling over five or ten years, fifteen at the most, aren't you?" And there's some truth to that.

But it's important to locate the shift properly to the 1920s because that's when things really started to matter, when we get the invention of jaywalking, arguments over speed and safety, and a deep transformation in the meaning and use of public roads.

The victory of the car was highly contested, involved great efforts in marketing, in PR, in legislation, and in capital investment.

As a taste of this, consider the efforts today going into the "electric highway" and the debate over the "clean fuels" legislation this past session.

In the 1920s it was all that, but multiplied many times over as folks were convinced by carrot and by stick to switch to the gasoline-powered automobile and to support a loose legal and regulatory environment for them - one that disadvantaged people on foot, on bike or horse, and on streetcar.

The victory of the automobile was hard-fought. It looks like it was something "natural" and "inevitable" now, an inescapable result of "progress" and the "invisible hand," but the real story is far more complex and ambiguous, and involved great interventions by corporate forces, corporate capital, and government policy.


Motorists arrived in American city streets as intruders, and had to fight to win a rightful place there. They and their allies fought their battles in legislatures, courtrooms, newspapers’ editorial pages, engineering offices, school classrooms, and the streets themselves. Motorists who ventured into city streets in the first quarter of the twentieth century were expected to conform to the street as it was: a place chiefly for pedestrians, horse-drawn vehicles, and streetcars. But in the 1920s, motorists threw off such constraints and fought for a new kind of city street—a place chiefly for motor vehicles. With their success came a new kind of city—a city that conforms to the needs of motorists. Though most city families still did not own a car, manufacturers were confident they could make room for motor traffic in cities. The car had already cleaned up its once bloody reputation in cities, less by killing fewer people than by enlisting others to share the responsibility for the carnage. [italics added]

We look back a century ago, and in an uncritical way we have a very casual and benign narrative about the triumph of the automobile.

But in order to think critically about our cities today, we need to recover the complexity, ambiguity, and real costs of that shift back then. If you are tempted by the hyperbole today about a "war on cars," consider a much more intense war waged for cars in the 1920s.
Posted by Salem Breakfast on Bikes at 12:01 PM