It's unfair to draw the comparison, but scheduling invites it: Saturday afternoon while the Grand Theatre's block party at High and Court is going on, the Friends of Salem Public Library are also having a party at Peace Plaza.

It has been argued several times here that Peace Plaza is a failed public space.

The dueling parties give you a direct opportunity to compare yourself how the two spaces function as public space. 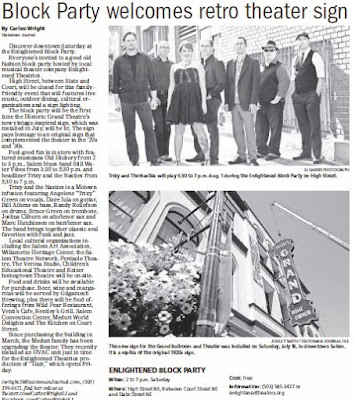 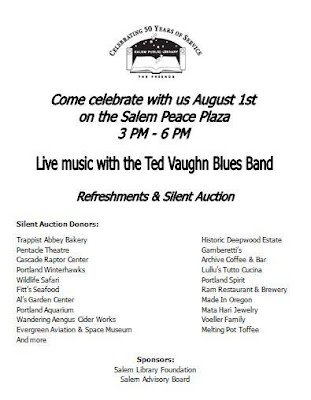 Then on Sunday, the Bike Boulevard Advocates are having a meet and greet - and while they'll be meeting indoors, the building is also the site of what I think is Salem's best plaza, a space that operates like a front porch. It is a strong contrast to the sunken back patio of Peace Plaza.

Haven’t attended one of our information presentations? Have questions about Bicycle Boulevards and their benefits to local neighborhoods? Want to meet the citizens actively working to bring improved bicycle infrastructure to “interested, but concerned” cyclists of Salem? Stop by; say “Hello!”; have all your questions answered. We look forward to meeting you!

Even if the proposed Winter/Maple Bike Boulevard doesn't serve your own transportation needs, it's also useful as a single point of focus for advocacy. As support there builds, it should have a spill-over effect showing that there is demand for facilities upgrades elsewhere. One limit, for example, of bike boulevards is that they are not along commercial corridors usually. So if you want to visit a business or get to a job site, you'll still need to traverse a busy road - and that's where we still need enhanced or protected bike lanes and sometimes also slower car speeds. (Recall that on one segment of Commercial Street by major grocery stores, well over 4000 people a day speed 10mph or more over the posted speed limit.) As the City sees demand for Bike Boulevards, they should understand that the boulevards need to be part of a full network, and that other projects will need to be completed. Vocal support now will help encourage the City to submit strong applications in November for ConnectOregon VI and 2018-2021 STIP funding.

Look at this protected bike lane in Salt Lake!

And this fabulous animation!

Shoot, the comparison won't be so convenient. The Library party is in retreat: "Come join us tomorrow for the 50th Anniversary Party - inside! That's right, inside the Loucks Auditorium. Due to the heat, the party is moving inside."

Sadly the fountain in the Peace Plaza would have been a great place to beat the heat. Undortunately the City refuses to fix it. Even though a private donor offered to pay for the repairs, they are leaving their options open to remove it at some point. Maybe when the new plan for the police station comes along and puts the building in the Plaza. You may think that idea is dead, but it is not. An architctural firm was hied last week to come up with 6 locations in the vicinity of City Hall. Here we go again....more secret meetings and then a plan with beautiful drawings will be unvailed that the public will be invited to swoon over and fork out $50 million to build!

It's true restoring the fountain there would be terrific for the summer months!

At the same time, it would just be one more ornament for the ornamental emptiness. By itself, a fountain doesn't address the fundamental structural problems with Peace Plaza.

Also, over at Hinessight, there's a very nice review of the Grand Theatre's block party, and the most telling detail, it seems to me, is the way the party activated the lawn at the Courthouse, which is usually a barren space, used otherwise mainly for lawyerly chats during court and for staff breaks, both during "office hours." The photo of picnickers there documents that great win!