The Lord and Schryver Conservancy has appealed the recent terms of approval for Gaiety Hollow. 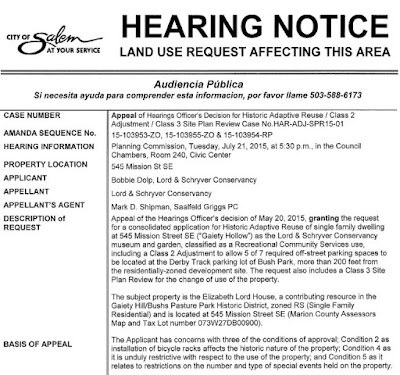 Lots of interesting things going on in the appeal set for a July 21st hearing before the Planning Commission.

Most of them, as I read them though, are matters in dispute with the neighborhood association, and I'm not sure they are very relevant here. There is a question whether the project is best identified in zoning and for permitted uses as a "museum and interpretive garden" or as a "cultural center." This impacts how often the site can be rented out and how meaningful is the corresponding revenue stream. There are also questions about how many people can attend events. The neighborhood association wants quiet, the Conservancy wants to ensure a sustainable revenue stream.

One of the matters, though, is totally relevant here: Where to put the bike parking?

The initial proposal - and the proposal renewed in the appeal - is for bike parking on the alley.

This clearly fails the requirement that the bike parking be 50 feet from the main entry.

And this is important. The City failed to enforce this on the CCBI building, and it's something they need to insist on consistently. We need to stop treating bike parking as a second-class provision, hidden away.

However! There are some potentially unique mitigating factors in play here.

The historic resource is the whole house, garden, and grounds. Unfortunately a garage and driveway was part of it, so the provision for auto parking is "integral," but it is plausible to say that bike parking is a non-contributing, non-historical addition to the grounds and garden themselves.

Additionally, without bike lanes on Mission Street, few people on bike would approach the museum* from Mission Street. It is much more convenient to approach it from High or Church Streets, and to use the alley.

Against this, bike parking on the alley will not be visible in the way racking alongside the driveway would be, and so there might be security concerns.

And we constantly adjust things with non-contributing and non-historical details at historic houses: We permit wheelchair ramps at the Wiggins house, a modern elevator at Bush Barn, and countless wireless communication antennae on historic buildings all around town, like this set on the Livesley building. Compared to these alterations, bike racking hardly seems like a "violation of the historic integrity of the garden and restoration efforts." It would be in the front, anyway, and the business part of the garden is in the back yard.

There is also the matter of precedent. If you say, OK, we'll make an exception to the 50 foot rule here - do we trust the City and the integrity of the process to insist on that 50 foot rule in all other places and in other future appeals on different projects? What about future additions of bike parking in the downtown historic district? Would creating an exemption here make it more likely someone would object to a bike corral downtown?

What do you think? I'm not sure there's an obvious answer. (See previous discussion here. There are also lots of photos of the grounds at the Gaiety Hollow blog.)

I don't think the proposed plan will work, actually. There's not enough clearance between the hedge/fence and alley.

The plan appears to use some kind of pole racking system with 12 inches on either side. This is not enough room for a bike either lengthwise or perpendicularly out into the alley.

The Staff Report is out, and it looks like the bike parking will be deferred for a separate review and appeal. There will be more to say later.

In the meantime, here are photos of the relevant locations.


* Apart from the particularities of zoning, in the ordinary sense of words, I think the thing is plainly a "museum." It's a museum to - can we call it Downton Abbey Pacific Northwest Style? It's a museum for an adaptation of European formal garden design, its practitioners, and other examples of their gardens. (The name even gives it away: It's LORD and Schryver, for heaven's sake!)

And - in honor of Justice Kennedy - are we ever going to talk about how it's a love story in addition to being a professional and design story? The seeming erasure of this aspect of their relationship, cast almost always as "professional" only, the first landscape architecture firm founded by women etc., seems like a bizarre subtraction of their own dignity.

Also worth noting is that the appeal involves Salem's leading land-use attorney. Why does this matter? 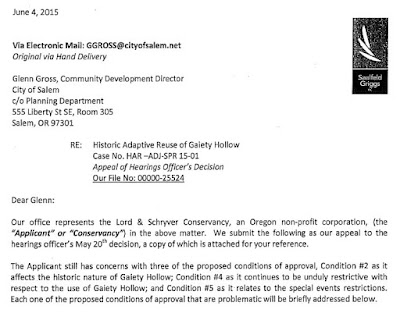 City Council is currently evaluating candidates for two open Planning Commission positions, and one of them, Chane Dillard Griggs, has an important note about potential recusals:

The Planning Commission will hear the appeal, and this is an example of precisely the kind of matter for which a recusal would be necessary.

Just something to register.
Posted by Salem Breakfast on Bikes at 7:00 AM

Updated with detail and comment on proposed revised bike parking plan. I don't think there's enough room on the property line and alley there.

Updated with brief clip from Staff Report as well as photos of candidate bike parking locations.