At Bush House Cars are not 19th Century Artifacts 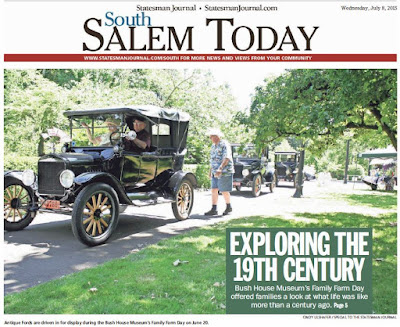 On the one hand, truly this is historical nitpicking, not very important.

But on the other hand, this is an especially fine example of the uncritical way we routinely distort key moments in transportation and social history.

For there's nothing 19th century about those cars!

And even though there were a few primitive cars in the very last years of the 19th century, the first car didn't come to Salem until 1903.

Even more, the cars in that photo are from another decade or two later.

And still, cars weren't common for several more years. Here's a table from the paper in 1913.  Marion County had 751 motor vehicles licensed that year. The total county population was a little over 40,000. That's not yet 2% of the population.

Consistently, for cars we overstate the speed of adoption and ownership rates in the first half of the 20th century.

The paper ran a somewhat careless headline, but at the same time, because vintage cars are popular, they are a good draw for museums and a way to get people interested in history, and our historical associations might not always do the best job of pointing out the anachronisms as they wish to make the customer happy. And even when they do point out the anachronisms, inertia in the triumphalist narrative of autoism soon swamps historical accuracy in the popular imagination.
Posted by Salem Breakfast on Bikes at 12:01 PM