The Portland Road study continues to percolate and they've got another survey out. You can take it in English or in Spanish.

A couple of questions effectively ask you to rank:
And it asks which third is most important for redevelopment and improvement.

Apparently there are some "focus group meetings" scheduled this month and next, but they do not meet the test for public meetings and are not being announced in advance. If you live or work in the area, put your ear to the ground, work those networks, and get yourself invited to one!

The "Opportunities and Needs Assessment" published in draft back in March, looks to be final now. Here's the final draft.

The appendixes, I think, have some new material, and some of it is interesting.

Though it's not in the study area, I was surprised how much land on Salem Industrial Drive is publicly owned.

I suppose it would be micromanaging the consultants, but I wish the maps were consistent and standardized from study to study. Here's a map of the same ratio for the Commercial-Vista study: 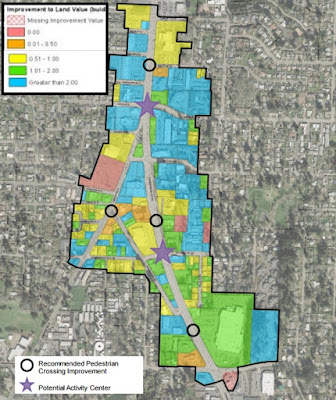 For those of us who aren't already experts, it would be nice to be able to grasp a comparative perspective at a glance. The different color scheme and different numerical buckets complicate things for an easy apples-to-apples comparison.

There's a brief discussion (alluded in a comment the other day) to the Hallman Safe Routes to School Plan of 2009, which seems mostly dormant at the moment.

There's also an interesting citation from a conversation with Real Estate and developer types:

This articulates the conventional wisdom about an auto-centric "catalyst tenant," linked to I-5 and intra-city access rather than internal Salem and neighborhood access. But it seems like that would just Woodburn Outlet/Keizer Station-ize the area and further hollow it out with large parking lots and big box development. This is not thinking for the 21st century.

Traffic counts have declined, but rather than see this as an opportunity for different kinds of traffic and a more diverse ecosystem of road users - MOAR CARS may be the preferred solution.

If you read the memo, chime in with your thoughts! And be sure to take the survey.
Posted by Salem Breakfast on Bikes at 12:01 PM