As Salem Sunday Streets cranks up for its third year, it looks like it has de facto morphed into something other than a real Open Streets event.

In fact, in the paper's "Holding Court" today it looks like organizers have in fact given up on that idea.

That’s the day byways near the Capitol will close for Salem Sunday Streets, a free day of fitness, music and fun.

Joe Abraham, representing local institutions that have joined the city of Salem in sponsoring the event, promises four stages and eight bands.

“It’s meant to build community and promote downtown living and the local economy,” said Joe, who anticipates a crowd of 5,000.

For those who enjoy working up a sweat, the day will include a 5K Run-Walk, stepping off at 10 a.m.

Performers will be onstage from noon until 4 p.m.

Organizers are hoping attendees will “actively transport” themselves to the event by bicycle, skateboard, walking or running.

That’s a nice way of suggesting this: get off your rusty dusty and leave the car at home.

Consistent with this is some additional activity, including a car show:

Other communities have struggled with the characteristics of an Open Streets event, and it's probably true that communities gravitate to what is familiar rather than risk what is new.

The Open Streets Guide alludes to this gravitational pull of the familiar:


Despite sharing a few basic characteristics—temporary car-free streets, community involvement—open streets should not be confused with block parties or street fairs because the core objectives are fundamentally different. Indeed, while street fairs and block parties provide positive community benefits, they do not explicitly support physical activity or the broadening of transportation choices.

Additionally, street fairs and block parties are often one-off events whereas open streets are most often part of a broader, ongoing municipal or organizational effort to promote and extend the myriad benefits associated with active transportation. [italics added]

Maybe the Salem "market" just isn't ready for an Open Streets event. But it seems premature to conclude this, since we didn't build off of the first one in 2013 to see if we could maintain bigger success as an Open Streets event in 2014. In 2014 it got smaller, and the City, as well as larger sponsoring organizations, haven't seemed very interested in the institutional support necessary for longer street closures themselves. Additionally, perhaps Salemites haven't been vocal enough about asking for longer routes. Or perhaps the uncomfortable truth is that Salemites don't actually want a true Open Streets event and prefer the fair and party format. 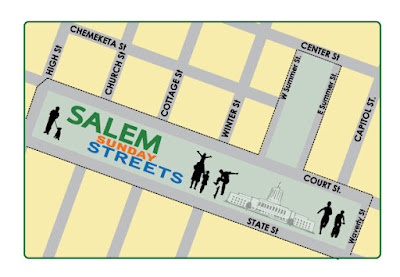 From an Open Streets perspective, once organizers are stuck with a tiny loop on the largely desolate Capitol Mall, then it's making lemonade - and the street fair configuration they've developed is, on its own terms, a very nice glass of lemonade.

But it's not an Open Streets event. There won't be miles of car-free biking or walking - unless you want to weave and bob around people listening to music while you loop several times around the perimeter. Which probably isn't a good idea.

A comparison with another block party is interesting - and it may be that this, not Sunday Streets, is the summer's best event. 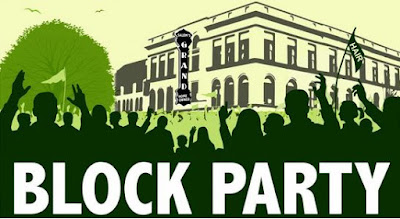 The Grand Theatre block party could very well be better because it will be centered on High and Court - centered on a proper downtown location with adjacent businesses, who will also be involved.

Sunday Streets right now is sidelined to the ghostly marble of the Capitol Mall, where there are no businesses and no natural adjacent activity.

As it is, Salem Sunday Streets is a good thing, not a bad thing. But it's not an Open Streets thing, and maybe it deserves a new name that better matches the street fair or block party format.
*For all notes on Salem Sunday Streets see here.
Posted by Salem Breakfast on Bikes at 12:01 PM

I agree with your critique. I remember thinking the last two years that I might actually like to have cars on the streets because then there would be some activity on the street. I don't understand what anyone would find exciting or interesting about walking or biking laps around the capitol. Portland Sunday Parkways is fun and exciting because you can explore and experience the city in a whole new way. Some places in Portland I would never see if it were not for Parkways. 45 minutes to experience it is a small price to pay for that.

Even the most avid cyclists in Salem don't seem to get what open streets are all about. Salem can't even support a 4th of July parade. It shouldn't be surprising that it doesn't support open streets.

Bike enthusiasts - step away from the keyboard and participate. Salem is YOU. It's ironic that you are complaining about your own apathy.

It's very frustrating trying to advocate for empty chairs. You've had a year to plan for this, an $18,000+ budget and you've dismissed it out of hand because "it's not like Portland." Guess what? Portland is not like Copenhagen, Amsterdam or Munich. To those cities, Portland is a giggle. Now what will you do? Stop driving to Portland with bike in tow?

If you dig a little further in your Open Streets Handbook, you'll note that the definition is fluid and location dependent. Street fair components exist in ALL open street initiatives. People in Salem have no visuals to reference. Where are your visuals, outreach? The education curve is steep, indeed.

What is stopping you from demonstrating how a bike path works next to a sidewalk around the County Courthouse and State Capitol? Where's the bike parade? Where are your numbers? Scuttlebutt says they are nonexistent or are digital only.

How about occupying the bus mall to advocate for public transit on Aug 30? Where are the bike-centered art installations?

I've been trying to trying to use some of the marketing budget (ca. $2000) for a pre-event after the High Street Hustle Saturday, August 15, closing 3.5 miles of High, Cross and Berry streets (Salem Saturday Streets?) but have too little support from the biking community. Huh? Where are you? This is the opportunity for which you've been waiting.

The throwdown has been set: a world with cars (Aug 29) versus a world without cars (Aug 30). Imagine gridlock Saturday and the freedom to move about downtown on Sunday. Where will you stand? On the street, or in front of your computer?

Thanks for letting me vent. Your analyses are always spot on and necessary but are over-shadowed by despair, which tends to demotivate people. Is it possible to accentuate the positively probable? Until then, they are merely castles in the air.

Please attend the next Streets planning meeting Thursday, July 23, 12:30 pm in the Public Works conference room. It's the last chance for closing 3.5 miles of streets August 15.

Thanks for discussing this here. As you may have experienced with the media, the blurb about SSS in the holding court piece was not exactly written as I described it to the journalist I spoke with. Thanks for assuming the best about the event and continuing to support it as something that is very positive for cyclists and active transportation in Salem. -Joe Abraham