As much as the Capitol fire of 1935 looms in our collective memory and regional imagination, it is surprising that there's not more urgency for the seismic retrofit of the Capitol.

But it's not the only place where the lack of urgency is strange.

The proposed Salem Alternative is not proposed to be engineered for a big earthquake (because that would be a whole lot more expensive!), sits on a known "liquefaction zone," and even with lesser seismic standards would cost at least five times what deluxe seismic retrofit to the "big one" standard (and again, including other enhancements!) on our existing bridges would cost.

There are still dots to connect!

The Capitol project as conceived by Senator Courtney may be too ambitious, may have pork, and should be weighed against schools and bridges and other key infrastructure needs. But if we get caught flat-footed, we are really going to be unhappy.

One way of having more money for other important things is to ditch the Third Bridge once and for all, and to focus on the more critical matter of retrofitting our existing bridges.

Here's a "parking heaven" for you!

It's just funny how much we prioritize "free public housing" for empty cars, but don't make the same fuss over bathrooms for people or just plain housing for people. 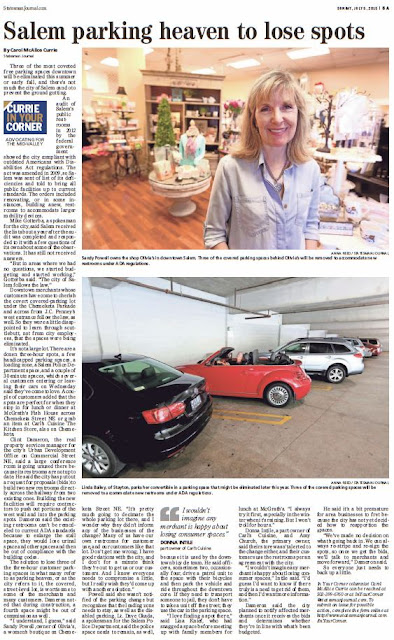 It's hard to know what to make of today's story on the potential loss of three or four stalls in a downtown parking garage.

It seems like some important context is missing. The Chemeketa parkade was in 2010 operating at a peak occupancy of 48%. Maybe that's changed a little in 2015, but not by much. The garage had 642 stalls at that time, so even at peak, there were still more than 300 empty stalls. The loss of three or four stalls on the lowest level essentially rounds to zero. Making ADA-compliant restrooms for people should not be an issue.

(And here's a reminder of the scale of commerce and social life that used to occur where there is merely car storage today.)

A few days earlier there was editorial on using the left-hand lane on the interstate for passing only. I read the matter somewhat differently. Discomfort with the bill is also a reflection of our discomfort with safe passing and sharing the road more generally.

Whether you are on foot, on bike, or in a car, "stay to the right" and "pass on the left" remain together a foundational principle in minimizing friction in mobility. It's a polite convention that we have found has enduring value. Not wanting to deviate from one's lane is trouble whether you are on the interstate, or negotiating a city street with bike lanes, or navigating on the sidewalk or multi-use path. It's a problem that scales from walking speed to Interstate speed. Just looking at it as a problem on the Interstate is a little misleading.

That's not to say that speeding isn't also a problem. It's almost certainly true that in the current environment the "power users" of the left hand lane are also speeding by a substantial margin. But even if we fixed the highway speeding problem, we'd still have sub-optimal use of the right/left convention from walking speed all the way up to highway speed.
Posted by Salem Breakfast on Bikes at 12:01 PM