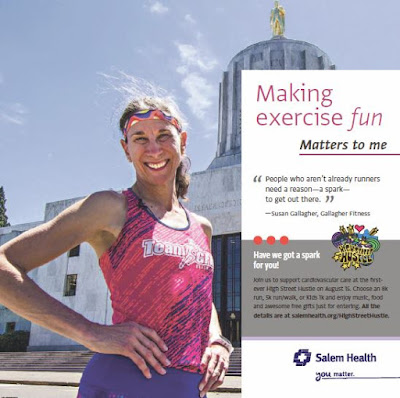 The Wall Street Journal had an interesting article a while ago comparing running marketing to bicycling marketing, "Easy Bikes, No Spandex Required." Regular readers here won't find anything very new on the bike side, but the comparison with running as well as bike-industry self-awareness might be new:


“When you look at a marathon or half-marathon, you will see people walking, and they’re not ashamed,” says Fred Clements, executive director of the National Bicycle Dealers Association. “They’re not made to feel embarrassed. And that’s something that you won’t really see at a bicycling event. I don’t think we’re as far along as running is in making events that appeal to everyone.”

There shouldn't be any uncertainty at all about this. It's crystal clear.

Here in town, we see the walking/running approach clearly in the relative successes of events like "On Your Feet Fridays," "Just Walk," "High Street Hustle," and "Salem Sunday Streets," each of which are essentially (or exclusively) oriented towards Salemites on foot, most of whom arrive and leave by car.

In them we also see the relevance of industry marketing, gender, and large corporate preferences in sponsorship.*


Even something meant as a crossover event like Salem Sunday Streets has a much smaller route and set of street closures than the run/walk-only High Street Hustle. The idea of closing several miles of street for a free, wholly non-competitive and car-free event for longer walking or for biking hasn't got traction here yet.

One important institutional driver of this is that nationwide the running stores are doing a lot better at general marketing and community advocacy than the bike shops! 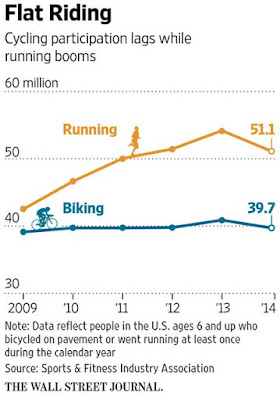 From the WSJ article again:


[M]embers of the bike industry admit that they’ve done a lousy job recruiting many new riders. So manufacturers, led by small, independent companies, have retooled one of the biggest obstacles to getting into cycling: the bikes themselves.

New models let riders sit in a more comfortable, upright position the way an old-school Schwinn did, but with lighter bike frames. They often have eight speeds or fewer, rather than the 18 to 33 on more complex bikes. Some bikes feature internal gears protected from dirt instead of the exposed jaws of traditional systems.

“I ride my bike purely to get from one place to another—not, ‘I’m going to take this out for exercise for like 20 miles,’ ” says Cassie Rae DuBay, a 28-year-old law librarian in Dallas. She says she aims to “add a little exercise to my day by riding 2 miles, as opposed to driving"....

Running participation in the U.S. jumped 20% from 2009 to 2014, according to the Sports & Fitness Industry Association. That growth is tied to how inclusive the sport has become. For every hard-core distance runner, there are plenty of others just looking for a bit of exercise and enjoyment. An explosion of costumed 5K races and wine-country half-marathons has prized fun over finishing times. Meanwhile, bicycling participation has barely budged.

Additionally, and not given as much play in the article as it probably deserves, gender plays a huge role. Part of the inclusiveness of running is that women are far more central in participation, organizing, and marketing.

Bike marketing to women remains in a clunky, exploratory stage, except in niches still largely mimicking marketing for the guys. And outside of those niches it's still dominated by "performance" cycling rather than commuting or family transport, casual transportation, or playful tooling around. There are some women's only bike rides, but nothing like a 12-week long set of classes explicitly aimed at a wide range of levels of interest and intensity or costumed events just for fun. 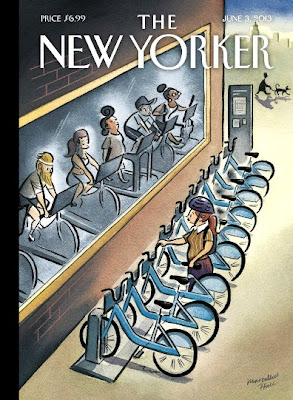 Finally, there is the way that all this is largely car-dependent.

You may recall this New Yorker cover. A person using bikeshare is able to get around town while also getting a nice moderate bit of exercise.

But instead we have a paradigm for fitness that slots it into a consumer model of discretionary time, discretionary income, and specialized exercise equipment. It's not something we just fold into our everyday routines - and do while we are doing something else. It's a special, even luxury, destination to which we drive. Salem's "Just Walk" programming is not, for example, focused on walks to the grocery store or to work or for other errands. Instead the walks are scheduled, essentially to start and end with a car trip and a parking lot. Club riding with bikes is the same way. As great as the High Street Hustle is, it also conforms to this.

Though from time to time a cross-disciplinary advocacy initiative might say "yay bikes!" the thought remains largely symbolic; consistently we throw money and institutional support behind projects with autoist assumptions, and do not actually support the creation of new systems that scale up for meaningful numbers of people and support walking and biking in lieu of making drive-alone trips. 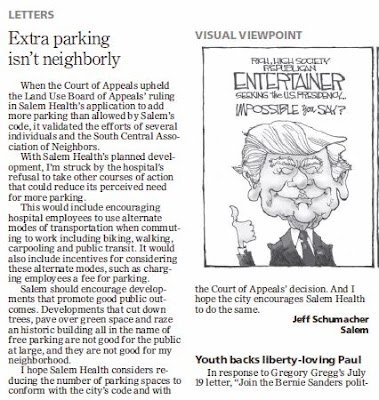 Looking at the sponsorships of Salem Health is interesting in this regard. Salemites have had much to criticize in the plans for the Blind School and the way they are devoting to much space to parking and car support.

It doesn't have to be this way. A reader recently pointed out that Seattle Children's Hospital was a Platinum Bicycle Friendly Business. "employees receive $4 every day they don’t drive alone to work. This adds up to about $1000/ year for dedicated alternative commuters." The hospital also has a company bike share fleet, offers new employees a customized commute packet with alternatives to drive-alone trips, and supports prospective bike commuters with a two-hour Bike Commute 101 class with additional route-planning assistance. 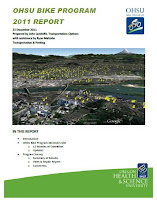 Oregon Health Sciences University, with whom it seems Salem Health is increasingly closely partnering, is a Gold-rated business and they have a pretty robust program as well.

Here's their 2011 Bike Program Report and some previous notes here on it.

We can hope one benefit of Salem Health's partnership with OHSU will be better thinking about employee commuting and the costs of free parking. (Though one important factor is that land may not be expensive enough in Salem. It makes budgetary sense to pay employees not to park alone when the cost to provide parking is so much higher. Salem isn't dense enough and land expensive enough, and this an indirect cost of our current land use preferences.)

An autoist bias extends to community support. Salem Sunday Streets has struggled with sponsorships, and Salem Health has been more eager, it seems, to support drive-to "fitness" events than everyday bike commuting or genuine celebrations of active transportation like Sunday Streets.

By contrast, the long list of sponsors - even an official running shoe! - for the High Street Hustle is impressive, including Salem Health, but it's not active transportation. It's recreational or competitive running that for most people starts and ends at the car in a parking lot.

Other events in Salem work similarly.

I don't know what it's going to take to get the Hospital refocused away from autoism and to get the bike industry away from Tour de Manspread. But if we really want to grow active transportation and to rework our cities for 21st century challenges, both escapes will need to happen.
*The focus in this is both too small and too big. It's too small insofar as this doesn't even touch on language and ethnicity. We're almost exclusively talking here about white people who speak English. That's a hugely important factor as well. But the focus is also maybe too big because there's always the risk of trying to reduce everything to a bikey monomyth: If we all biked, we'd solve all problems! Which of course is patently false. But it's remarkable how many problems you can start addressing when you make bicycling a central part of the suite of solutions.
Posted by Salem Breakfast on Bikes at 7:00 AM