Two moments in the prospects for reuse of older buildings seemed worth some notes this week.

Earlier this week the news that Mountain West was going to purchase the Deluxe Ice Cream plant and donate it to Family Building Blocks was big. 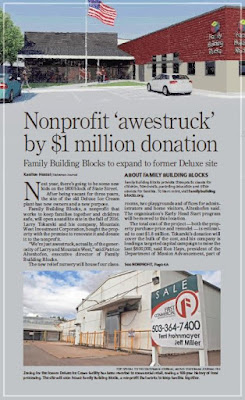 That vacancy was a serious hole in the fabric of State Street, and the social service and educational mission of Family Building Blocks much more congenial to the neighborhood than a renewal of some kind of light industrial ever would have been. And it's great that a substantial part of the existing buildings will be reused rather than all demolished.

So that seems like a solid win in a lot of ways.

What's in it for Mountain West as a self-interested, profit-seeking development firm is harder to read. There's got to be some angle in addition to altruism that makes the move pencil out for the firm.

There's also their involvement with that new technical school on Portland Road.

These substantial projects are interesting, maybe even curious. Hopefully they aren't "too good to be true."

It's also interesting to speculate on the connection to the Boise Redevelopment. Even as we might criticize some of the subsidies the City is giving Mountain West on that project, maybe there is also a sense in which those subsidies indirectly make possible a move like this to subsidize Family Building Blocks in turn. It might be that there is a partially circulating economy of subsidies, and to analyze them individually in isolation is to miss certain kinds of system or network effects. (But of course if this is right, that also diminishes the project a little bit as a "pure" donation by Mountain West - maybe they're just recirculating a donation the City first made to them, paying it forward.)

When we rush to evaluate "developer giveaways" sometimes it may be more prudent to withhold judgement for a certain agnosticism.

With the limited information available to the public - and this is an argument for more transparency by the City - it is not possible to be certain on any of this. But it's also a reminder that life is complicated, we rarely have the full picture, and it can be helpful to be more tentative about our judgements.

The City is also starting to plan for a new park on the Fairview property. The idea seems to be to preserve Le Breton Hall, to demolish the other buildings, and to engage in a master planning process for the park and use of Le Breton Hall.


New Community Park in South Salem!
The public is invited to attend a series of four public meetings to plan a 29-acre park being proposed on a portion of the Sustainable Fairview property located at Old Strong Road SE near Reed Road SE. The first public meeting is scheduled for Wednesday, November 18, 2015, at 6:30 p.m., and will take place at Pringle Community Hall at 606 Church Street SE. On-and off-street parking are available

Le Breton is the oldest building at Fairview, and deserves the lion's share of preservation efforts. So this is great to see.

As a building, it's awfully big for a park, though. Without being exhaustive, here are some City parks with buildings (other than toilets):
The buildings are all much smaller than Le Breton and have a fairly narrow range of uses. So it seems like some kind of private use or multiple private uses will need to be structured into the public use of the park and building. Maybe the front of the building has a public use and the back is remodeled for office space. Maybe we can finally build a park with a cafe or family-friendly pub nearby. Something. This will be an interesting project to watch. It seems like unusually ripe for creativity and transformation - but also risk it will fall flat and be dull and underutilized. One of those high-risk, high-reward deals.

It is also interesting that the road right-of-way for Old Strong Road appears to be included in the park deal. (Here's the City's proceedings on changing the road name and the intent to vacate the right-of-way. A quick check did not turn up whether the vacation had been completed.) When there is a paved road that is no longer part of the public street system, maybe there are also recreational possibilities for car-free travel on that road! Though this also makes the primary access to Le Breton by the back door rather than front.

But devoting this area along Old Strong Road to a park is also a significant renunciation of the possibilities for the "village center" and its commercial nexus for the greater Fairview redevelopment. It's a move towards making Fairview much more car-dependent and significantly less walkable if neighborhood-scaled retail and commerce cannot be dropped into that "village center" area.

Maybe this is just "right-sizing" the village center and a realistic reduction from an over-ambitious and idealized initial vision for the Fairview project.

After the City completes the park process, the park's Master Plan will then inform a revised Master Plan or Refinement Plan for the Lindburg Green development of Sustainable Fairview, and the interface between the projects will also be interesting.

Anyway, lots of interesting wrinkles to consider.
Posted by Salem Breakfast on Bikes at 12:01 PM

The paper has a photo set "Demolition has begun on former Deluxe Ice Cream plant."

But announcement article says "Most of the property's standing structures will remain intact, but some will be demolished, [Patrice Altenhofen, Executive Director] said."

It didn't see like a big demolition effort was going to be the opening move.

A search of the City's permit database doesn't turn up a demolition permit.

So there might be a few loose ends here.

It's an "alteration" building permit rather than a demolition permit. It was issued on the 6th. Nothing to see here, move along...

Regarding Old Strong road vacation - section 4.3 in the Purchase Agreement says "Purchaser desires to have Old Strong Road remain in place. Seller agrees [to] suspend its application to vacate the Old Strong Road right-of-way through Closing."

I would love to see a public INDOOR park as part of this building.