Transportation History on the Front Page! 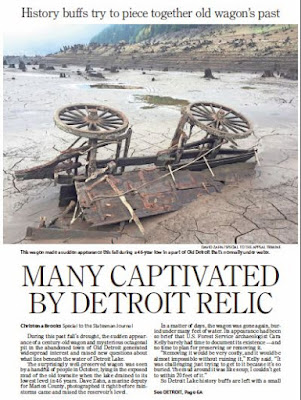 One great part of it is that it accurately handles dates.

It suggests the wagon could have served well into the 20th century, and is not merely a relic of the 19th:


“These wagons tell stories we shouldn’t overlook,” [David] Sneed said. “This is the way your relatives got around not long ago. I promise you, it was no less exciting than driving cars today. There are countless recordings of folks being killed in these vehicles … there is not a single thrill-seeking activity today that would rival the danger or excitement associated with driving them.”

Old Detroit’s wagon was made by Milburn Wagon Company in Toledo, Ohio, sometime around the turn of the last century. Milburn was one of the nation’s biggest manufacturers: in 1882, it was producing 600 wagons per week, the majority farm wagons, Sneed said.

This one could’ve been built as late as the early 1900s, but certainly not before the 1890s, he said. The clue? The hubs on the 16-spoke wheels – themselves much ballyhooed by Milburn for “having 12 more spokes than any on the market” – were patented by James Sarven in 1857 but not used on Milburn wagons until the 1890s, Sneed said....

["]These wagons were ubiquitous; they were used everywhere for everything.”

And then along came the automobile. Trucks, cars and tractors replaced the horse-drawn wagons that had dominated the scene for so long. Wagon-makers went out of business in droves as auto companies ate up market share. Surprisingly, a few held on through the 1950s, though they mainly produced wooden trailers to be pulled behind tractors, Sneed said.

Old Detroit mirrored the national trend. By the 1940s, wagons sat idle next to houses and in backyards and moldered in the woods.

There's still some of the tone of autoist triumphalism, but the piece rightly reflects that especially in more rural areas, autos and motors replaced wagons and driving stock slower than we think, and were not uncommon through the Depression. We often want to make wagons the subject of a solely antiquarian interest, but they participated in a mixed transportation ecosystem for a long time in the first half of the 20th century. And our principal metaphor of "driving" derives from driving a wagon or carriage. There is more to see in continuity than we think!

(There's also just a funny, unintended historical rhyme of course with that "other Detoit," famous for the auto industry.)

Nothing of great significance here, but a nice change-of-pace.

Huh. They basically ran the whole package again. It's a new piece, but mostly a retread. Pages one through four in the front section. There's the Impeachment trial, the Legislature starts up again tomorrow and a Greenhouse Gas bill will be on the agenda, and this is what gets the front page prime real estate. It was neat the first time, but now it's Groundhog Day.

Updated with the retread version in today's paper.