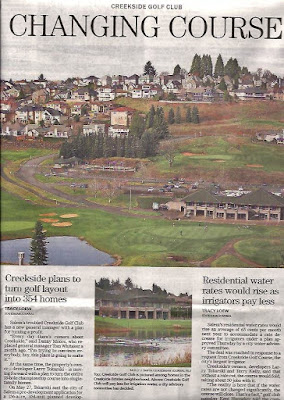 Yesterday the two articles about the dispute and dueling plans for the Creekside golf course and development generated lots of comment.

One key concept seems to have gone missing in the discussion, however: Climate Change.

The debate has been framed up in terms of

But missing is the idea that water, at least during the summer, will experience varying degrees of scarcity. And we even had all those front-page articles last year!

From the article about the proposed water rate cut:


“It’s not unusual to try to save or to create 50 jobs in this town forgiving taxes for years on end, for doing a whole variety of fiscal gymnastics to get them in,” said City Councilor Chuck Bennett, a committee member. “I’m not sure why in the case of a business like this we wouldn’t do the same kind of thing relative to this cost.”

But [Public Works Director Peter]Fernandez said that would open the door to more special deals, undercutting the city’s carefully designed rate structure, which charges each customer class the actual cost of the water it uses....

the plan...would save Creekside about $60,000 per year. Creekside is the only Salem golf course to irrigate with city water.
The club spends about $300,000 per year on water, and had asked to be reclassified to either the commercial rate, at $2.19 per unit, or the industrial rate, at $1.54 per unit.

From the article about the proposed housing development:


The property’s owner – developer Larry Tokarski – is moving forward with a plan to turn the entire 18-hole championship course into single-family homes.

On May 27, Tokarski sent the city of Salem a pre-development application for a 156-acre, 354-unit planned development....

Homeowners say the homes they bought were advertised as being in a golf course community, and that the covenants, conditions and restrictions (CCRs), recorded in 1992, prohibit the course’s development.

As a group, homeowners stand to lose $30 million through reduced property values if the course is developed, one resident said at the meeting Thursday.

On Facebook, Councilor Bennett criticizes the paper's presentation and offers his own explanation and counter-narrative:


Five options were considered by the Task Force. The recommended option to reduce the irrigation volume rates by 30 percent was developed based upon updated peak water use data, and to maintain the integrity of the cost of service model. Maintaining the integrity of the cost of service model requires that a new rate structure be applied to all of the customers within a classification, not just one customer. To further maintain balance, cost reductions for a customer classification must be balanced with corresponding increases to the remaining classes.

The current irrigation rates reflect customer usage characteristics developed in 2011. Current water use data were analyzed to determine whether there had been changes in relative peak demands (peak hour costs represent approximately 20 percent of total irrigation costs) across customer classes. In addition, data from 2015 showed a reduction of almost 10 percent in irrigation peak demands relative to other customer classes. Recognizing large nonresidential customers frequently irrigate during off-peak hours, these costs could also be reduced.

All of this is complicated and clearly there will be trade-offs. There is probably not a simple, clear, and elegant solution that is fair to everyone.

But even Councilor Bennett's explanation is framed up as an analysis of "peak demand" and nowhere is there evidence that a rate scheme considered the supply side in addition to the demand side. I suppose the value of the golf course as a stormwater detention and filtration system is touched on, especially as Public Works may require modification of any Planned Unit Development for storm water management.

But the problem here with water rates is not flood, but drought. We have a known seasonal scarcity of variable severity, one that is likely to have more frequent and deeper episodes of scarcity in the future.

If we want pricing signals to support wise use of a seasonally scarce resource, then reducing pricing after "a reduction of almost 10 percent in irrigation peak demands relative to other customer classes" may be a move in the wrong direction. Instead, we should want to encourage a further 10% reduction, and a price increase could be a way to accomplish that.

If one of our high level policy goals is to encourage water conservation, it doesn't look like the plan for Creekside implements that strategy in a thoughtful way. Instead, it looks like it approaches the matter from a fundamental perspective of plentiful water rather than any scarcity of water.

Fortunately there will be more debate and discussion of all this. Councilor Bennett says there will be a Public Hearing planned for October 10th at City Council.

In the meantime, it seems impossible that there is a viable long-term plan to retain the golf course. Nike and Adidas are both getting out of the golf business and the demographic trends seem to promise golf's decline. Since the area is poorly served by transit, not very walkable, and intensely car-dependent, it is not a good match for any kind of multi-family or low-income housing, so there may be no real public interest in anything other than managing stormwater. Adding to housing supply, in an area far from any proposed bridge, with 354 homes seems like it might be the best use after all.

(For more on water supply, drought, and climate change see notes here.)
Posted by Salem Breakfast on Bikes at 7:00 AM

Email ThisBlogThis!Share to TwitterShare to FacebookShare to Pinterest
Labels: Drought and our Water Supply

Excellent analysis SBOB as usual. I think the time will come when we will need to ban irrigation of golf courses and lawns in the summertime in order to have enough water to drink, unless we want to pay exorbitant water rates. For the time being, however, we ought to be raising rates for "irrigators" (as the SJ article calls them) not lowering them. We also ought to be doing more to help poor people pay their water bills and not have their water turned off which, according to Susann Kaltwasser, is a problem in Salem. She says Eugene and Portland have programs to help the poor and we do not.

This is a good analysis of the various issues involved but excludes one of the major ones -- flooding in the Battle Creek, Mill Creek drainages and the role the golf couse and other open, undeveloped space plays in water retention during peak rain periods. That also is under consideration as you consider alternative uses for the golf course.
Again, you are right. This is a complicated issue and the simplistic way it is dealt with by reporters and bloggers is designed to persuade not inform residents as to the problems this city faces in water policy now and in the future. It would be nice if it all boiled down to simple answers like do or don't give a reduction in rates. But, try to explain how that helps those being flooded in Battle Creek, or in downtown Salem. Chuck Bennett, Councilor, Ward 1

There's a fundamental error in the argument over jobs. The impact if one business closes depends on what people do with the money they previously spent at that business.

That is, if one golf course closes, other golf courses may well get the business, leading to a similar number of jobs being supported and no net loss of jobs.

Now, one can make various assumptions about what are replacement products for golfing at Creekside, and saying that golfing at other courses isn't a substitute good (as economists call them). What's really going on, one could say, is business networking, and those people will now rent fishing boats or buy fancy bicycles to do those meetings, etc.

Or one could say that Creekside golfers will buy products from out of Salem instead, meaning a shifting of jobs from local Salem jobs to other places.

But if Creekside closes, it's not as simple as saying those people who specifically lose their jobs are the end of the local economic analysis.

Doug's Transportation Ramblings said...
This comment has been removed by the author.
August 18, 2016 at 1:35 PM