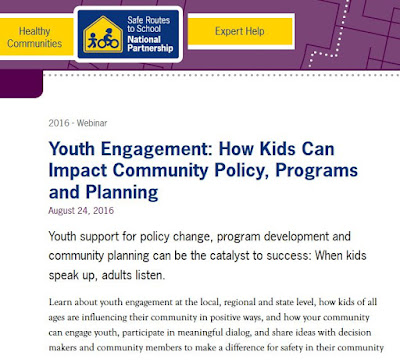 This webinar announcement from the Safe Routes to School National Partnership just came across the newswire the other day and it looks like it could be useful. Some families are already involved in the Salem Area Bike Boulevard Project, but in general terms the Safe Routes to School concept is undernourished here in Salem and it can always use more support and broader support.


Youth support for policy change, program development and community planning can be the catalyst to success: When kids speak up, adults listen.

Learn about youth engagement at the local, regional and state level, how kids of all ages are influencing their community in positive ways, and how your community can engage youth, participate in meaningful dialog, and share ideas with decision makers and community members to make a difference for safety in their community

It's FREE and you can learn more and register for it here.

This event is not free, nor is it aimed at the general public - but it seems worth a small notice anyway.

OSU's Kiewit Center for Infrastructure and Transportation is offering "Legal Aspects and Liability of Traffic Safety."


This course provides an understanding of the legal responsibilities that Oregon public agencies have to the public for highway safety, and how our court systems work to assure that these responsibilities are met. Emphasis will be on practices and procedures that serve to protect the public, public agencies and their personnel. Recent case studies will be presented to define how legal immunities of public officials have changed in Oregon, as a result of the Clarke vs. Oregon court case, and subsequent statutes.

One of the key questions covered in the course is "How to Reduce the Risk of Liability - Are you prepared to win lawsuits against you?"

Absent from the language about "legal responsibilities" is the ethical dimension of valuing life and what public agencies involved with traffic should concretely do to value life better.

Over at Strong Towns they've talked about this many times.


Wider, faster, treeless roads not only ruin our public places, they kill people. Taking highway standards and applying them to urban and suburban streets, and even county roads, costs us thousands of lives every year. There is no earthly reason why an engineer would ever design a fourteen foot lane for a city block, yet we do it continuously. Why?

The answer is utterly shameful: Because that is the standard.

In the engineering profession's version of defensive medicine, we can't recommend standards that are not in the manual. We can't use logic to vary from a standard that gives us 60 mph design speeds on roads with intersections every 200 feet. We can't question why two cars would need to travel at high speed in opposite directions on a city block, let alone why we would want them to. We can yield to public pressure and post a speed limit -- itself a hazard -- but we can't recommend a road section that is not in the highway manual.

When the public and politicians tell engineers that their top priorities are safety and then cost, the engineer's brain hears something completely different. The engineer hears, "Once you set a design speed and handle the projected volume of traffic, safety is the top priority. Do what it takes to make the road safe, but do it as cheaply as you can." This is why engineers return projects with asinine "safety" features, like pedestrian bridges and tunnels that nobody will ever use, and costs that are astronomical.

This course at OSU looks more like an old-fashioned exercise in bureaucratic CYA than a modern discussion of safety and the system changes we can make to increase safety and actually - rather than procedurally - reduce liability.

Maybe this is criticising the course for something it's not trying to be, but there appears to be a real disconnect from the rhetoric and changing practices in things like Vision Zero. This seems like something that's fallen behind the times.

The Maestro of Strong Towns himself, Charles Marohn, PE, AICP - yeah, he's the Engineer who wrote that passage above - will be in town Wednesday, October 6th.

The timing may be excellent for the UGB debate on the Salem River Crossing.

Hopefully, in addition to connecting with critics of the SRC and those who are already sympathetic to the Strong Towns message about infrastructure and finance, he'll be able to get in front of Chamber of Commerce, City Council, and other folks who haven't heard of him or heard much of him.

So Save the Date!

Much more to come, obviously.

The Twitter was all atwitter last night over the new name for the Portland Bicycle Transportation Alliance, which they revealed and ratified at their members meeting.

According to BikePortland, BTA folks said "'The Street Trust' name [is] modeled after orgs like The Freshwater Fund or Trust for Public Lands."

You know what it makes me think of? The Sugar Trust, the Steel Trust, and Teddy Roosevelt's Trust-busting. The Street Trust sounds like a Big Money Combination for the Highway Lobby, ARTBA's new nom de guerre in the car and infrastructure wars.

It sounds like the exact opposite of what it's supposed to suggest!

Not a fan, alas. It'll be interesting to hear what others have to say.
Posted by Salem Breakfast on Bikes at 7:00 AM