At the MPO: Second Pass at Applications for 2018-2023 Funding Cycle

The Technical Advisory Committee for our MPO, the Salem-Keizer Area Transportation Study, meets today, Tuesday the 9th, and they'll be taking a second look at applications for "the Federal Surface Transportation Block Grant Program (STBGP-U) funds and Transportation Alternatives (TA-U) set aside funds for the FFY 2018-2023 Transportation Improvement Program (TIP)."

After a pre-application phase, full applications were due on July 29th, and there has been a winnowing. TAC members will do a second scoring to "evaluate and prioritize the projects and provide the results by August 30, 2016."

Here are the preliminary rankings on the full pre-application list from June. Projects with full applications submitted on them are linked to the application (you will need to download them as they will not open in a new browser window). Unlinked projects for whatever reasons did not have full applications submitted and are not going on to the next round. 17 out of 31 advanced. Here also is a map and a summary table.
I don't know if there are any particularly interesting things to say about projects that got dropped.

As I recall, there was only about $14 million available, so there's still some prioritizing and winnowing to be done. At the same time, some of the projects might be programmed with 2015-2018 funding, it appears, so it's hard to say how much will actually need to be cut.

Here's a few observations in passing.

In the description of the McGilchrist project there's some language about "bike-ped amenities" that needs to become obsolete.

Basic sidewalks and bike lanes should be a baseline, a standard, not a frill or amenity.

Another place where a project description is undernourished is on the Center Street Bridge seismic study.


At the project and regional levels, describe how the completed project promotes environmental justice (by avoiding, minimizing, or mitigating disproportionately high and adverse human health or environmental effects including social and economic effects on minority and low-income populations).


Completion of the plan will have no impact on minority and low income populations.

The Edgewater district is a low-income area in Salem, and since in an earthquake connectivity across the river and access to the Hospital and government services, as well as a 24" water main attached to the bridge will all be affected - how the heck does this City say "no impact"? It seems to me this project has a huge positive impact, offering benefits for health and in economic effects!

This is probably just an unintended artifact of bureaucratic form-filling, but geez. Way to milquetoast the most important project on the list.

The application on the Union Street Bikeway says it will go "from Commercial St. NE to 12h St. NE." There has been ongoing uncertainty about the section from Commercial to Winter Street, and this appears to confirm that currently there is funding for the work on the intersection of Commercial and Union only, that anything east of Commercial still lacks full funding. (I believe that Urban Renewal Funds would be the the greatest part, or perhaps all, of the local match portion of the funding.) 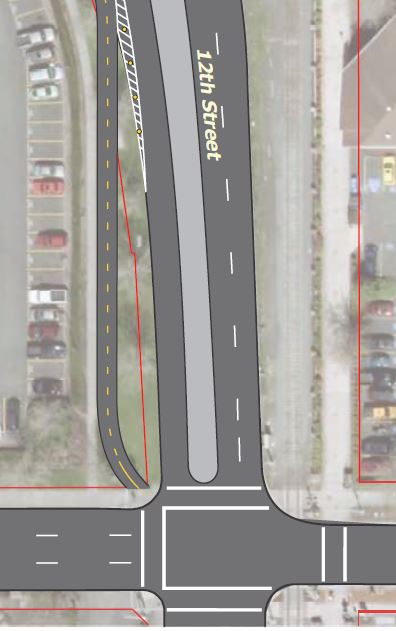 For the elbow curve where 12th and Union Street meet, at Summer Street there is proposed to be a transition to a two-way separated bike lane. This appears to be carried over from the June 2013 renderings out of the Downtown Mobility Study. It would use the crosswalk at 12th and Marion to make the connection with the 12th Street Esplanade.

All in all the project list remains reasonable, broadly speaking, and it's difficult to say there are any really bad projects on it. Even the Keizer Growth Study has been retooled some and is much improved since its days as a terrible TGM application last year. (Do you see any real losers?)

From here the most important projects seem like
SKATS Technical Advisory Committee meets Tuesday the 9th at 1:30pm. SKATS is at 100 High St. SE, Suite 200, above Andaluz Kitchen and Table Five 08.
Posted by Salem Breakfast on Bikes at 7:00 AM

As for Salem's dropped projects, I should have added this note from Council last month, which explains splitting the pre-app list into two buckets of priority, high and low. It appears the City did not submit full application on the "lower priority" list of projects, and instead focused only on the "higher priority" list.