On Council agenda is an information report on the decision by the Planning Commission on the amended Fairview Refinement Plan for the Fairview Lindberg Green development.

It is not interesting as part of any Council meeting action or deliberation, but the conditions of approval imposed by the Commission may be worth some comment. In general, they look like they might represent a little bit of retreat - on details more than on structure or anything big - from some of the traffic calming elements in the original proposal. There are also some house-keeping details on internal and external transitions and seams between developments. 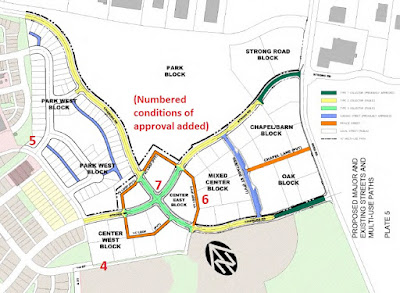 The red numbers on the map are keyed to the conditions of approval here.


Condition 2(c): For all public street types, pavement widths may be adjusted at intersections to accommodate additional travel lanes as warranted to mitigate traffic impacts.

5: The illustrative site plan (Plates 2 and 3), the proposed major and existing streets and multi-use paths pan (Plate 5), ), and all other plates, where applicable, within the amended refinement plan shall be revised to show the realignment of the northernmost street within the "Park West Block" area of the amended refinement plan that intersects East Street within the Fairview Addition West Refinement Plan to instead align with an extension of U Street from the Fairview Addition West Refinement Plan.

7: The Type 3 Collector Street shall include "sharrows" striping and signing to accommodate safe bicycle travel.

Condition 4 appears to address the fact that as originally proposed, in one plat the street would be twice as wide as in the adjoining plat.

Condition 5 addresses what would be extensive plat jog.

Both of these would assure more continuous lengths of fully aligned streets. But, I don't know, plat jog and street jog sometimes looks silly and disorderly, but it can also offer traffic calming, a little like a chicane. I really wonder how important making these alignments are. It's nice that Lindberg Green wants some of the roads to be smaller than in the adjoining developments.

The Staff Report justifies this by appeal to the principle of interconnectedness:


One of the thirteen sustainable land use principles included in the The Fairview Plan [the total overall master plan] is the provision of an interconnected street system.

But interconnection is opposed to "loop and lollipop"; two offset grid systems would still offer interconnection. I don't know..."reasonable people can disagree" I suppose.

Condition 6 appears to address a curious omission for a multi-use path segment along the private drive mini ring road (brown) at the intersection of Strong Road and Lindberg Road.

Condition 7 is necessary because the green cruciform section of Strong and Lindberg Roads is missing the multi-use path or a bike lane, and so sharrows will partially compensate for this.

Condition 9 looks like it will make every intersection flare out. This is consistent with Condition 2(c) for additional turn lanes at intersections.
Especially if the flare is not also accompanied by separate striped turn lanes, it will be something of a reversion to an earlier intersection treatment that has been a little mysterious in Salem!

The narrow streets seemed to promised real slowing, and the widening will make it just a little bit easier to zoom or to proceed unimpeded.

Is it a big deal? Probably not, but again, the constraints on traffic flow could be considered a feature rather than bug!

The justification here is "fire department" and their big trucks and turning radius needs. This is a sign that it's time to start thinking about smaller fire trucks and making the trucks conform to present-day urban needs for more walkable streets rather than allowing over-sized truckage to dictate street size. We're doing it backwards right now.

All in all none of these conditions seem worth too strenuous of an objection. Mostly they're just things to notice. More important than getting the streets exactly right is making sure the whole development is popular and can unfold in construction with delightful speed. 80% or 90% solutions built soon will be so much better than agonizingly slow 100% perfection.

(For previous notes on Sustainable Fairview and Lindberg Green see here.)
Posted by Salem Breakfast on Bikes at 7:00 AM