A couple of minor notes on neighborhood association meetings and matters this week...

The West Salem Neighborhood Association meets tonight, Monday at 7pm - not quite overlapping with the official end of the Council Work Session on the Salem River Crossing. They'll be talking about it, related matters, and a couple of other transportation things.


It will be interesting to learn more about the letter on Marine Drive - which may also touch on the Second Street undercrossing concept.

The NEN meeting for this week is cancelled, but the minutes on the last meeting contain a note relevant to one of the West Salem items. NEN voted to send

I seem to recall that SCAN has also discussed this in regards to McKinley and the park adjacent to the school. There may be others.

Back in February you might remember there was a proposal at Council to sort out some very squishy boundaries between City land and School land on playgrounds and parklands at or near schools. By design or by accident there wasn't much public outreach or deep consideration of how it was all going to work out, and so the process slowed down after some of the neighborhoods said "wait a minute; there's more here to think about." It looks like it may come back to Council later this summer or fall.

Broadway and Liberty at Boon's 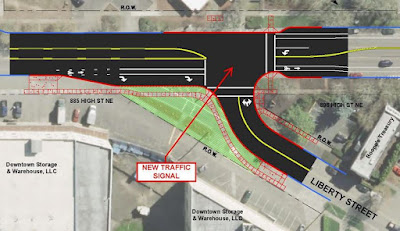 The City's published the plan for the redesign of the y-intersection of Liberty and Broadway/High where Boon's and Downtown Storage is. It will become more of a conventional t-intersection. Construction started on the 25th last week, and the intersection is supposed to reopen on September 1st.

At one point they were talking about a traffic circle here, but the City and consultants decided against it. Especially if the warehouses are ever redeveloped, the green area that is being filled in could become more of a plaza area. That weird modernist mission revival building - weird in a good way, as it is a fascinating outlier in Salem's architecture - at 960 Broadway is also for sale, and maybe something interesting will happen there. (A little more on the building here.) It was the site of Jason Lee's first building in Salem circa 1841, and a century later the Oregon Electric was running on the tracks up Broadway. There is tremendous latent energy here at this site. It's full of untapped potential, and if ever there are enough people walking or dining, it might be possible to reshape the sidewalk space in more interesting ways.

I don't know that there's anything very interesting to say about the intersection striping other than to say the dashed bike lane on the north side of High/Broadway is a total appendix. It connects to nothing on the north. So maybe if we ever get a road diet for Broadway it can connect to a bike lane, but for the moment it's a dead-end (or maybe "dead-start" is more accurate, since is it in the southbound direction).


A nixed audit of the Oregon Department of Transportation may complicate efforts to fund infrastructure improvements. State lawmakers on both sides of the aisle have said an audit of ODOT is needed to give them confidence that they can fund new projects.

The audit was to kick off last week, but the Oregon Transportation Commission put the kibosh on the review, citing concerns about the contractor's neutrality and ability to conduct a thorough audit because of timeline delays.

Something just to file away for later as maneuvering for a 2017 Transportation Package continues this summer and fall.
Posted by Salem Breakfast on Bikes at 12:01 PM