ITE to FHWA: In the City, your Hydraulic Autoism is Obsolete!

News of the Institute of Transportation Engineers' critique of the Federal Highway Administration's proposed rules on measuring congestion has been making the rounds this afternoon. That's a pleasant thought to take into the weekend. 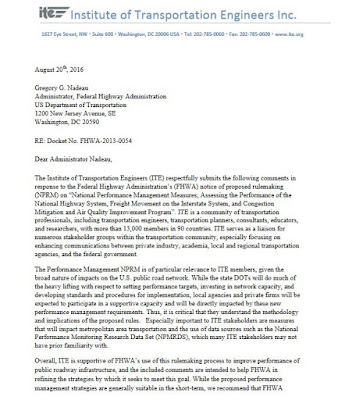 About measuring congestion and performance by vehicle delay in urban environments they write:


There is significant concern that by focusing on delay minimization for vehicle travel, the vast majority of which involves SOVs, other modes of travel may suffer. This is especially true of pedestrians and bicycles, which are often accommodated within developed urban areas by reducing the amount of available infrastructure (and thus, the capacity) for SOVs. Even transit-based modes, such as buses, may cause minor to moderate additional delay for SOVs as their usage increases, given the unique operating characteristics of these vehicles. While few would argue that the expansion of these non-SOV modes of travel do not bring with them significant benefits to public health and community livability, these benefits are marginalized by distilling the congestion performance of a roadway down to the sole ability of SOVs to move quickly through the corridor. Such a measure harkens back to the previous 50 years of SOV-centric policy development, and has the potential to reduce (or even reverse) the investment in multimodal transportation infrastructure, for the sake of meeting this performance target. [italics added]

More at People for Bikes, Transportation for America, and Streetsblog.

Our comments on this subpart are focused on the proposed measure for the non-Interstate NHS, section 490.507(a)(2), Percent of the non-Interstate NHS providing Reliable Travel Times. The non-Interstate NHS includes facilities with a wider variety of physical characteristics than Interstates. Interstates are built, for the most part, to a particular standard: Lane width is regulated, medians are present and access is controlled. The non-Interstate NHS, especially as defined after October 1, 2012, encompasses a wide variety of roads that are considered principal arterials. Some are limited access, multi-lane facilities that are designed and operate similarly to Interstates. However, the majority of non-Interstate NHS facilities defined within the SKATS boundary, and likely in most MPOs in the country, provide for the movement of traffic within an urban area including the distribution to lower-order roads. Often these roads have sidewalks and bike lanes and serve adjacent land uses, both residential and commercial/industrial uses, via driveways and other curb cuts. Some roads will have lanes dedicated for the movement of transit vehicles. These roads may be undivided, divided by barriers, or have center-turn lanes. The movements on them are controlled by signals that are spaced according to the functional class of the intersecting facility. Some have speed restrictions during part of the day due to the proximity to a school.

A performance measure that focuses solely on the reliability of vehicular travel time in such a setting is potentially directing investment that could damage the urban fabric of the area and diminish the livability along the corridor. A more nuanced measure is necessary in such situations.


ITE wasn't the only group to submit comments critical of FHWA's proposed rules. Most comments were not in support of the proposal to measure congestion by counting vehicles, especially in urban areas.

For those interested, the comments to the proposed rules can be found here:

Note: while 8,878 comments were received, the vast majority of these are form letters from members of several advocacy groups. Agency comments tend to be posted the week of the closing date (August 20).

The Transportation 4 America piece has a summary of some of the comments.