Yesterday's Truck Crash should Remind us of Flex Lanes

Yesterday's truck crash on one of the bridge off-ramps will doubtless provide fodder for those who believe we need a new bridge. 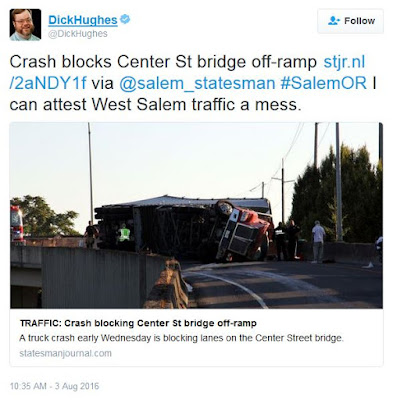 But delay may not have been all that significant. Not worth $1 billion, anyway. 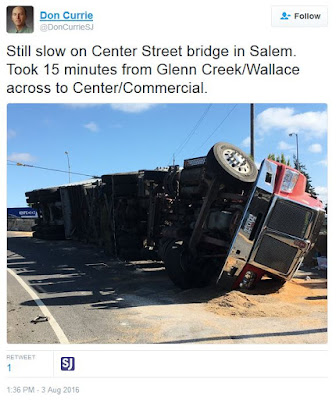 The paper described it as backing up for "nearly three miles and causing congestion for more than six hours." But how much slowing and delay actually occurred? Significantly, not all traffic was backed up: Bike traffic was much less affected, it should be noted.

It has always seemed like there ought to be contingency plans for temporary two-way functioning of the bridges, especially to use the surplus lane capacity in the "reverse commute" direction. (Other examples from 2014 and 2015.) When the Center Street bridge is slow, why are we not able to use some of the Marion Street Bridge? That is a huge amount of wasted capacity, and doesn't require any new lanes be built.

And in fact, one of the discarded options would have formalized permanently two-way traffic. It was rejected because it "would require a major re‐engineering of the existing street system" and this was seen as too disruptive and, consequently, too expensive.

But it's hard not to wonder if it deserves a second look and more serious consideration, or if parts of it could be retrieved for a lower-tech and non-permanent approach to rush-hour congestion or crash congestion. Flex lanes may not have been considered sufficiently.

At this point this may be only of academic interest, unfortunately, but maybe there would be new interest in it. (I had been searching for "brown" for a couple of years now and kept coming up null. But it is actually in the DEIS under a different name, which I missed!)

For convenience, here it is from Chapter 2 of the DEIS.


2.2.6.12
Two 2-Way Bridges Alternative
The intent of the Two 2‐Way Bridges Alternative was to make the existing Center Street and Marion Street Bridges into two‐way facilities. With this alternative, one bridge would be for local traffic and the other bridge would be for regional or through traffic. Theoretically, this would improve traffic flow by reducing the conflicts and merges among the two traffic streams.

Reason for Dismissal
Technically impracticable (bridge connections and street grid system). From a traffic flow perspective, the benefits of separating local from through traffic are well known. The typical application is a facility, such as an expressway or freeway. By definition, access to such facilities is controlled and limited. As more traffic flows or movements intersect the facility, more separate structures (for example, lanes and ramps) are needed to achieve the flow (operations) benefits desired.

The Center Street and Marion Street Bridges are integrated into the surface‐street system in a grid fashion. To separate regional from local flows would require facilities on both sides of the Willamette River that would direct all local flows to and from one bridge and all regional flows to and from the other bridge. However, downtown Salem and West Salem are each key destinations for both local and regional traffic. Therefore, to provide the desired mobility, each facility would need to provide all movements (that is, regional‐to-local, regional‐to‐regional, local‐to‐regional, and local‐to‐local). Multiple connections would be needed between each bridge and the major north‐south surface streets (primarily Liberty and Commercial Streets on the east side and Wallace Road on the west side). In addition to providing all the connections, the facilities would need to be separated enough physically to avoid conflicts that would result in congestion. Without this physical separation, the envisioned benefits would not be achieved because congestion on the surface‐street system would continue or worsen.

While two‐way bridges would address one part of the Purpose and Need (mobility across the Willamette River), they would not alleviate congestion on the connecting street systems, in particular at the key intersections at the bridgeheads. Successfully directing the two different traffic flows (local vs. regional/through) to the two separate bridges would require a series of intersections and ramps among the two bridges and the major north‐south routes. Doing so, however, would require a major re‐engineering of the existing street system. For example, ramps and new connections would have to be constructed that would extend well beyond the current bridgeheads (perhaps one to two blocks in multiple directions). This connect with and improve. For these reasons, the Project Management Team concluded that the Two 2‐Way Bridges Alternative was not a technically feasible solution for this project.


The Purple Alternative and Land Use Laws

Another interesting discarded option is the "purple" one. It is interesting because of the discussion of the UGB. On a superficial reading, an analogy seems possible:

Anecdotally, witnesses on the bridge said some of the traffic slowdown was caused by driver behavior: Drivers originally wanting to exit to southbound Front decided to cross three lanes to the northbound Front exit rather than continue to Commercial. Sort of a head-scratcher.